Caramel-Filled Brownies. Cake4Kids held a Yard Sale / Bake sale yesterday to raise funds to officially file for non profit status and it was a great success! 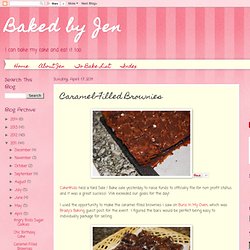 We exceeded our goals for the day! I used the opportunity to make the caramel filled brownies I saw on Buns In My Oven, which was Brady's Baking guest post, for the event. I figured the bars would be perfect being easy to individually package for selling. I followed the recipe exactly with the exception of not adding the nuts as I didn't want to leave people with nut allgeries feeling left out of enjoying such goodness. 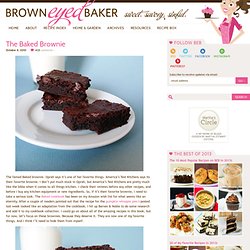 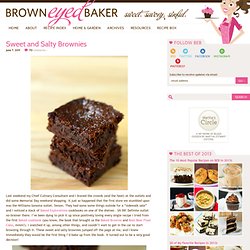 Make the Caramel: In a medium saucepan, combine the sugar and corn syrup with ¼ cup water, stirring them together carefully so you don't splash the sides of the pan. Cook over high heat until an instant-read thermometer reads 350 degrees F, or until the mixture is dark amber in color (keep a close eye on the caramel at all times, as it goes from golden brown to black and burnt very quickly), 6 to 8 minutes. 2. 3. 4. 5. Untitled. The cake is a lie / bucket cake All you do is take your favorite cake recipe, bake and let cool. Before frosting, make sure your cake is shorter than a kit-kat bar, if not trim some off the top to leave room for the M&M;’s. Frost with your favorite frosti.

HOWTO bake a brownie in an eggshell. Knock You Naked Brownies. Goodness. 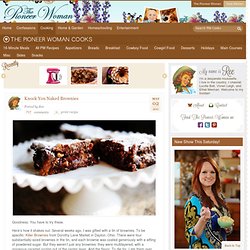 You have to try these. Here’s how it shakes out. Several weeks ago, I was gifted with a tin of brownies. To be specific: Killer Brownies from Dorothy Lane Market in Dayton, Ohio. There were four substantially-sized brownies in the tin, and each brownie was coated generously with a sifting of powdered sugar. They’re one of the best things I’ve ever tasted. While an official recipe for the Killer Brownies is not available, the classic layered brownie recipe known as “Knock You Naked Brownies” is rumored to be a pretty good match.

I decided to whip up a batch over the weekend and see if they measured up. It was all in the name of research, of course. Outrageous Brownies. Dense, moist, amazing brownie recipe – East Village Kitchen. I went out in the heat first thing this morning to meet my friend Nora for breakfast, and was delighted to see all the signs that summer has (temporarily) arrived in the East Village. 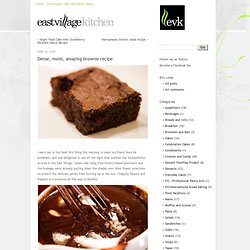 Steam was rising from freshly-hosed pavement and the bodegas were already putting down the shades over their flower selections to protect the delicate petals from burning up in the sun. I happily flipped and flopped in a sundress all the way to Veselka. With temperatures this high, I know I run the risk of not doing these brownies justice, which would be a tragedy. I made them weeks ago – to round out the honeycomb cannelloni that I prepared when Graig and Alice came to visit.

Back then, the weather felt like winter, extended. Of course in a heat wave, nobody wants the thickest, most dense, fudgy, delectable, heavy-duty brownies that ever lived. No Bake Chocolate Cake Recipe. I don't know about you, but I didn't accomplish much today. 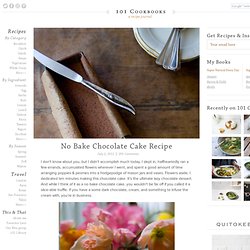 I slept in, halfheartedly ran a few errands, accumulated flowers wherever I went, and spent a good amount of time arranging poppies & peonies into a hodgepodge of mason jars and vases. Flowers aside, I dedicated ten minutes making this chocolate cake. It's the ultimate lazy chocolate dessert. And while I think of it as a no bake chocolate cake, you wouldn't be far off if you called it a slice-able truffle. 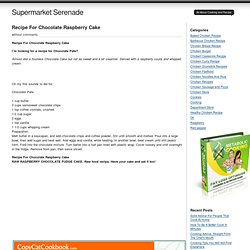 Almost like a flourless Chocolate Cake but not as sweet and a bit creamier. Served with a raspberry coulis and whipped cream. Whole Lemon Bars. I’ve been having my own little festival of citrus around here, especially because I’ve become addicted to the produce aisle at my local natural food store. 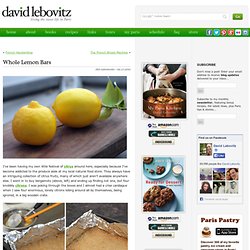 They always have an intriguing collection of citrus fruits, many of which just aren’t available anywhere else. I went in to buy bergamots (above, left) and ending up finding not one, but four knobbly citrons. White Chocolate Ginger Papaya Bread Recipe. My parents grew up in a third world country and moved here with little money to spare. 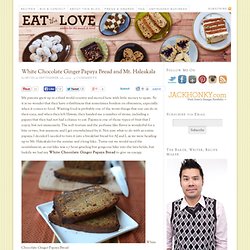 So it is no wonder that they have a thriftiness that sometimes borders on obsession, especially when it comes to food.