All I Crave is a Normal Life Chapter 1: Default Chapter, a Harry Potter fanfic. The story starts with a 25 year old Harry. 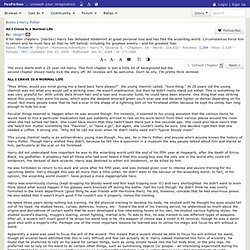 This first chapter is just a little bit of background but the second chapter should really kick the story off. All reviews will be welcome. Don't be shy, I'm pretty thick skinned. "Miss White, would you mind giving me a hand back here please? " the young chemist called. Peculiar things seemed to happen when he was around though. This young chemist really is an extraordinary young man though. Harry did not understand how important he was to the wizarding world until the end of his fifth year at Hogwarts, after the death of Sirius Black, his godfather. He was forbidden to return to his aunt and uncle after his fifth year, and was instead given over to intense and severe training for his upcoming battle. Harry was enormously clumsy (kept dropping his bloody wand and Ron kept tripping over it!)

He spent three years doing nothing but training. Apparently a wand was used to focus the will of the wizard. Ghost of a Memory Chapter 1, a Harry Potter fanfic. Ghost of a Memory by Phoenix Boy Disclaimer: Nothing in this story is intended to infringe the copyright belonging to JKR and Warner Brothers and anyone else who's got lucky. 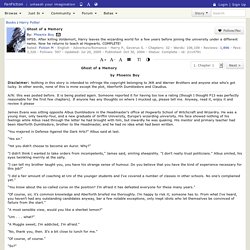 In other words, none of this is mine except the plot, Aberforth Dumbledore and Claudius. A/N: this was posted before. It is being posted again. James Evans was sitting opposite Albus Dumbledore in the Headmaster's office at Hogwarts School of Witchcraft and Wizardry. "You majored in Defense Against the Dark Arts? " "Yes sir. " "Yet you didn't choose to become an Auror. "I didn't think I wanted to take orders from incompetents," James said, smiling sheepishly. "I can tell my brother taught you, you have his strange sense of humour. "I did a fair amount of coaching at Uni of the younger students and I've covered a number of classes in other schools. "You know about the so-called curse on the position? "Of course, sir, it's common knowledge and Aberforth briefed me thoroughly. The Art of Peace Chapter 1: Prologue The Point of No Return, a Harry Potter fanfic.

Prologue: The Point of No Return People ran screaming as a devil walked among them, no sign of emotion on his face even if they had dared to look. 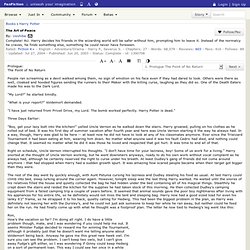 Others were there as well, cloaked and hooded figures sending the runners to their Maker with the killing curse, laughing as they did so. One of the Death Eaters made his was to the Dark Lord. Fool if you think it's over Chapter 1, a Harry Potter fanfic. Disclaimer: I don't own these characters, I don't make money of them either. 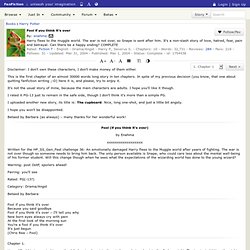 This is the first chapter of an almost 30000 words long story in ten chapters. In spite of my previous decision (you know, that one about quitting fanfiction writing ;-D) here it is, and please, try to enjoy it. It's not the usual story of mine, because the main characters are adults. I hope you'll like it though. I rated it PG-13 just to remain in the safe side, though I don't think it's more than a simple PG. I uploaded another new story, its title is: The cupboard. I hope you won't be disappointed. Betaed by Barbara (as always) – many thanks for her wonderful work! Harry Potter and the End of a New Life Chapter 1: Envelopes, a Harry Potter fanfic. Themed list: Living as a Muggle : painless_j. Lira_snape: Harry changes his name - legally or for the purpose of hiding. Severitus and Harry Gone Missing Fics. HomeCommunityBooksHarry Potter Severitus and Harry Gone Missing Fics Severitus and Harry Gone Missing Fics Erised's Bane by The Laziest Woman on Marsreviews Sixth Year--Spoilers, Harry must come to terms with new pain, as well as the prophecy that dictates his own life, all the while trying to contain the madness that threatens to breach his soul, deciding if desire brings him happiness or destruction. 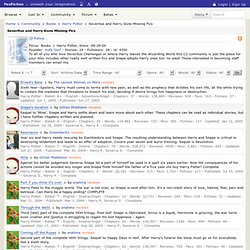 Carry on My Wayward Son. D Holidays, son_of_darkness! Author: ravenna_c_tanRecipient: son_of_darknessTitle: Burning Day (Part 1/2)Pairing(s): Harry/DracoSummary: Changed by the long war and unhappy with his life, Harry starts a new one in Muggle London, but something is still missing. 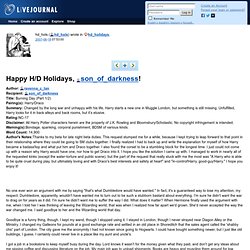 Unfulfilled, Harry looks for it in back alleys and back rooms, but it’s elusive.Rating:NC-17Disclaimer: All Harry Potter characters herein are the property of J.K. Rowling and Bloomsbury/Scholastic. No copyright infringement is intended.Warning(s):Bondage, spanking, corporal punishment, BDSM of various kinds.Word Count: 14,900Author's Notes:Thanks to my beta for late night beta duties. No one ever won an argument with me by saying "that's what Dumbledore would have wanted. " Goodbye is a funny thing, though. I got a job in a bookstore to keep myself busy during the day. You don't want to know what I did to keep myself busy during the night. Reversathon: for Louella Endwiddle - Like a Circle in a Spiral (HP/SS) Title: Like a Circle in a SpiralAuthor: Howlock Pindle aka sullacatPairing/Character: HP/SSSummary: Maybe it was naïve to think that all he had to do was kill one wizard, and the rest would fall into place. 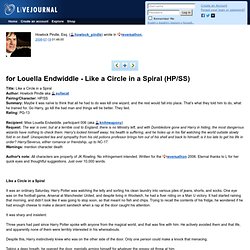 That’s what they told him to do, what he trained for. Go Harry, go kill the bad man and things will be better. They lied. Rating: PG-13 Recipient: Miss Louella Endwiddle, participant 006 (aka knitmeapony)Request: The war is over, but at a terrible cost to England; there is no Ministry left, and with Dumbledore gone and Harry in hiding, the most dangerous wizards have nothing to check them.