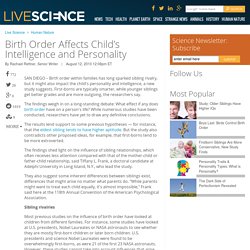 First-borns are typically smarter, while younger siblings get better grades and are more outgoing, the researchers say. The findings weigh in on a long-standing debate: What effect if any does birth order have on a person's life? While numerous studies have been conducted, researchers have yet to draw any definitive conclusions. The results lend support to some previous hypotheses — for instance, that the eldest sibling tends to have higher aptitude.

But the study also contradicts other proposed ideas, for example, that first-borns tend to be more extroverted. The findings shed light on the influence of sibling relationships, which often receives less attention compared with that of the mother-child or father-child relationship, said Tiffany L. Sibling rivalries Why? Frank conducted the work with Hannah Turenshine and Stephen J. Study: Older Siblings Have Higher IQs. Being the oldest child in the family has its perks: later bedtimes, no hand-me-downs, and, according to a new study, a higher IQ. 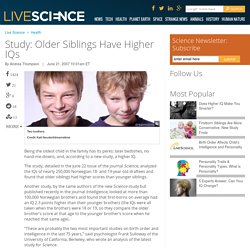 The study, detailed in the June 22 issue of the journal Science, analyzed the IQs of nearly 250,000 Norwegian 18- and 19-year-old draftees and found that older siblings had higher scores than younger siblings. Another study, by the same authors of the new Science study but published recently in the journal Intelligence, looked at more than 100,000 Norwegian brothers and found that first-borns on average had an IQ 2.3 points higher than their younger brothers (the IQs were all taken when the brothers were 18 or 19, so they compare the older brother’s score at that age to the younger brother’s score when he reached that same age). “These are probably the two most important studies on birth order and intelligence in the last 75 years,” said psychologist Frank Sulloway of the University of California, Berkeley, who wrote an analysis of the latest study for Science.

Birth Order And How It Impacts Your Parenting Style. Birth order is a hotly contested topic. 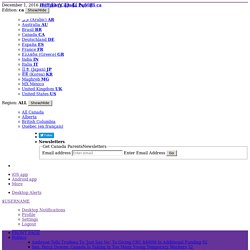 Research shows birth order does not effect personality, but that is because research uses ordinal data. Yes, if you were born in 1979 and your sister was born in 1982, you are the oldest by age. However, I am talking about the psychological phenomena of how each child finds their own unique position in their family constellation, and how this is shaped by our experiences.

Common experience seems to shape us in some common ways -- and that includes our parenting styles. If you are the first child born into a family, it’s a pretty safe bet that your parents are newbies so they’ll be nervous, zealous, vigilant and likely over protective. The feedback loop between when their baby first smiles and when they cheer and smile back, giving positive social reinforcement is very immediate. They can be perfectionists and like rules they can apply to assure they get things right. The eldest soars so long as they are doing well. The Achiever, the Peacemaker and the Life of the Party: How Birth Order Affects Personality. You’re going on a family road trip with your adult siblings. 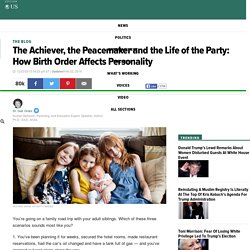 Which of these three scenarios sounds most like you? 1. You’ve been planning it for weeks, secured the hotel rooms, made restaurant reservations, had the car’s oil changed and have a tank full of gas — and you’ve mapped out rest stops along the way. 2. You’ve been rushing all morning trying to get things together, eventually throwing snacks and clothes haphazardly into your bags at the last minute. 3. If #1 sounds familiar, you are likely the eldest child. How Birth Order Affects Your Personality. WHEN I TELL PEOPLE I study whether birth order affects personality, I usually get blank looks. 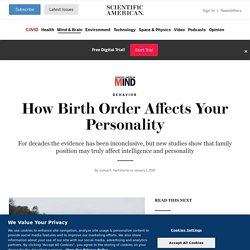 It sounds like studying whether the sky is blue. Isn’t it common sense? Popular books invoke birth order for self-discovery, relationship tips, business advice and parenting guidance in titles such as The Birth Order Book: Why You Are the Way You Are (Revell, 2009). Newspapers and morning news shows debate the importance of the latest findings (“Latter-born children engage in more risky behavior; what should parents do?”)

While tossing in savory anecdotes (“Did you know that 21 of the first 23 astronauts into space were firstborns?”). But when scientists scrutinized the data, they found that the evidence just did not hold up. Size Matters Before discussing the new findings, it will help to explain why decades of research that seemed to show birth-order effects was, in fact, flawed. There are many reasons that family size could affect our predilections and personalities.