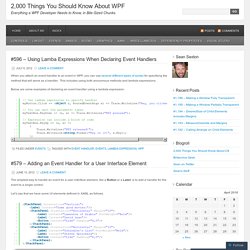 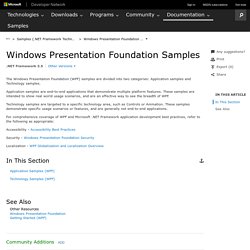 For comprehensive coverage of WPF and Microsoft .NET Framework application development best practices, refer to the following as appropriate: Is WPF dead: the present and future of WPF. As a WPF developer for years I was recently concerned by the new direction chosen by Microsoft on its client platforms with the rise of the brand new WinRT framework. 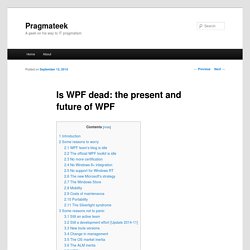 I was concerned for good reasons: I’ve suffered from the collateral damages of the Silverlight failure, and as the proverb says “once bitten, twice shy”. Since 2009 I have put a huge personal and professional investment in WPF, using it to develop LOB applications in the financial industry, and now I’m even providing training on this topic. So as a professional developer and trainer the future of WPF is critical for me so I’ve studied this issue more thoroughly.

In this article I’ll share my findings with you, in a completely objective and transparent manner, and I hope you’ll provide your own facts, so that the community can have a better vision of the future of WPF. WPF in 4.6 and beyond. WPF in .NET 4.6.1. In addition to the platform and tooling improvements that we delivered in .NET 4.6,, we started looking into WPF App Local as a means of delivering platform improvements in March of this year. 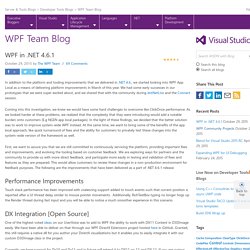 We had some early successes in our prototypes that we were super excited about, and we shared that with the community during dotNetLive and the Connect session. Coming into this investigation, we knew we would have some hard challenges to overcome like ClickOnce performance. As we looked harder at these problems, we realized that the complexity that they were introducing would add a notable burden onto customers (E.g NGEN app local packages). The Future of WPF Beyond the .NET Framework 4.6. Since WPF (Windows Presentation Foundation) was introduced by Microsoft in 2006 as part of the .NET framework, the platform has been on the rise in popularity among Windows developers. 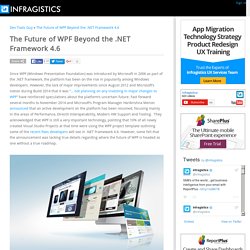 However, the lack of major improvements since August 2012 and Microsoft’s notion during Build 2014 that it was “… not planning on any investing in major changes to WPF” have reinforced speculations about the platform’s uncertain future. Fast forward several months to November 2014 and Microsoft’s Program Manager Harikrishna Menon announced that an active development on the platform has been resumed, focusing mainly in the areas of Performance, DirectX Interoperability, Modern HW Support and Tooling. Wpf - Can i develop Windows 7 desktop apps using Windows 10? C# - WPF vs. WinForms - a Delphi programmer's perspective? WPF vs WinForms - Which is easier to learn? This question originates from StackOverflow, but as I see there are a lot of beginners that ask this question, I wanted to share the answer on my blog as well. 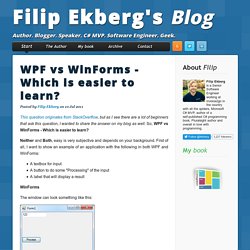 So, WPF vs WinForms - Which is easier to learn? Neither and Both, easy is very subjective and depends on your background. First of all, I want to show an example of an application with the following in both WPF and WinForms: A textbox for input A button to do some "Processing" of the input A label that will display a result WinForms The window can look something like this: The code for this is quite trivial and easy even for a beginner: So far, we haven't touched anything in the designer. Learn Silverlight or WPF first? What is the difference between WinRT, UWP (Universal Windows Platform) and WPF? - Stop Byte. C# - Windows GUI: WPF or WinRT (2015+) Kirupa.com - Expression Blend / WPF Tutorials. Is WPF recommended to learn even I am comfortable with WinForm? : csharp.

Should I stick to WinForm or start learning WPF? : dotnet. Introduction to WPF. Overview The Windows Presentation Foundation is Microsofts next generation UI framework to create applications with a rich user experience. 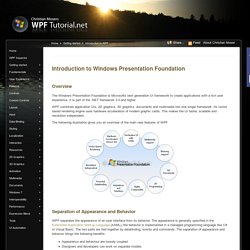 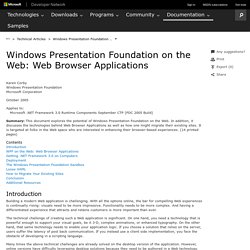 In addition, it discusses the technologies behind Web Browser Applications as well as how one might migrate their existing sites. The complete WPF tutorial.