Microsoft heralds new universal Windows apps, announces 'Centennial' toolset to import Win32 apps. At the Build keynote, Microsoft touted new Universal Windows Platform apps that are coming to the Windows Store, including what appears to be a concerted push from Facebook. 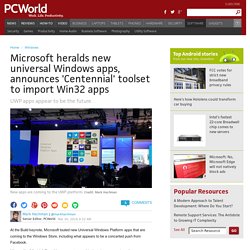 Microsoft’s UWP apps have been the source of some controversy ever since Epic’s CEO, TIm Sweeney, complained that with UWP, Microsoft was shutting its app store to third-party software. Microsoft has responded by saying it will allow modifications to UWP apps. * Windows 10 development for absolute beginners. Dev Center. How to - Helps you along every step to publish your app. The Windows App Studio ‘How-to’ section will take you through the steps from starting a new app to downloading an app package that is ready to be, extended, installed, or published to the store. 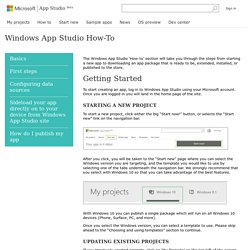 To start creating an app, log in to Windows App Studio using your Microsoft account. Once you are logged in you will land in the home page of the site. Starting a new project To start a new project, click either the big “Start now!” Button, or selects the “Start new” link on the navigation bar. After you click, you will be taken to the “Start new” page where you can select the Windows version you are targeting, and the template you would like to use by selecting one of the tabs underneath the navigation bar. A deeper dive into the Universal Windows Platform. Hello from day 2 of Build 2015 in San Francisco. 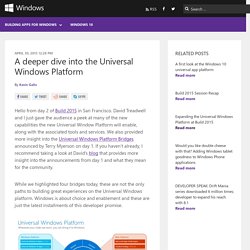 David Treadwell and I just gave the audience a peek at many of the new capabilities the new Universal Window Platform will enable, along with the associated tools and services. We also provided more insight into the Universal Windows Platform Bridges announced by Terry Myerson on day 1. If you haven’t already, I recommend taking a look at David’s blog that provides more insight into the announcements from day 1 and what they mean for the community. While we highlighted four bridges today, these are not the only paths to building great experiences on the Universal Windows platform. Windows is about choice and enablement and these are just the latest installments of this developer promise. 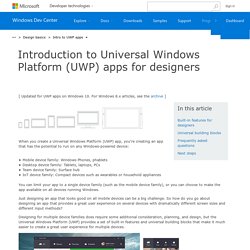 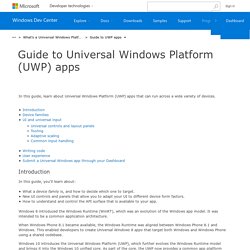 Introduction In this guide, you'll learn about: What a device family is, and how to decide which one to target.New UI controls and panels that allow you to adapt your UI to different device form factors.How to understand and control the API surface that is available to your app. Share code between WPF and Universal Apps with PRISM. This will be a series of blog posts that deals with sharing code and XAML between WPF and Universal Apps. 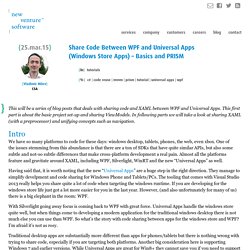 This first part is about the basic project set-up and sharing ViewModels. In following parts we will take a look at sharing XAML (with a preprocessor) and unifying concepts such as navigation. Intro. App Studio–Free Tool to create apps in Windows Stores. GitHub - Microsoft/Windows-universal-samples: API samples for the Universal Windows Platform. How to extend an App Studio app using Visual Studio. Download How do I download the videos? 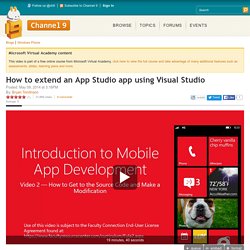 To download, right click the file type you would like and pick “Save target as…” or “Save link as…” Why should I download videos from Channel9? It's an easy way to save the videos you like locally.You can save the videos in order to watch them offline.If all you want is to hear the audio, you can download the MP3! Which version should I choose? If you want to view the video on your PC, Xbox or Media Center, download the High Quality MP4 file (this is the highest quality version we have available).If you'd like a lower bitrate version, to reduce the download time or cost, then choose the Medium Quality MP4 file.If you have a Windows Phone, iPhone, iPad, or Android device, choose the low or medium MP4 file.If you just want to hear the audio of the video, choose the MP3 file. 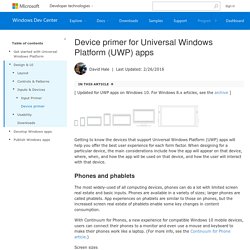 For Windows 8.x articles, see the archive ] Getting to know the devices that support Universal Windows Platform (UWP) apps will help you offer the best user experience for each form factor. When designing for a particular device, the main considerations include how the app will appear on that device, where, when, and how the app will be used on that device, and how the user will interact with that device. Phones and phablets The most widely-used of all computing devices, phones can do a lot with limited screen real estate and basic inputs.

With Continuum for Phones, a new experience for compatible Windows 10 mobile devices, users can connect their phones to a monitor and even use a mouse and keyboard to make their phones work like a laptop. Screen sizes 4'' to 5'' for phone5.5'' to 7'' for phablet Typical usage UI considerations The small size of a phone's screen allows only one frame at a time to be viewed in both portrait and landscape orientations. Guide to Universal Windows Platform (UWP) apps. [ Updated for UWP apps on Windows 10. 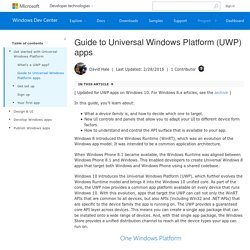 For Windows 8.x articles, see the archive ] In this guide, you'll learn about: What a device family is, and how to decide which one to target.New UI controls and panels that allow you to adapt your UI to different device form factors.How to understand and control the API surface that is available to your app. Windows 8 introduced the Windows Runtime (WinRT), which was an evolution of the Windows app model. It was intended to be a common application architecture. When Windows Phone 8.1 became available, the Windows Runtime was aligned between Windows Phone 8.1 and Windows. Windows 10 introduces the Universal Windows Platform (UWP), which further evolves the Windows Runtime model and brings it into the Windows 10 unified core.

Because your UWP app runs on a wide variety of devices with different form factors and input modalities, you want it to be tailored to each device and be able to unlock the unique capabilities of each device. Navigation design basics for Universal Windows Platform (UWP) apps. [ Updated for UWP apps on Windows 10. 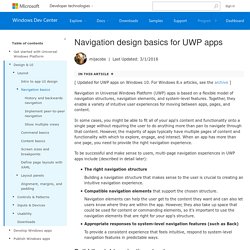 For Windows 8.x articles, see the archive ] Navigation in Universal Windows Platform (UWP) apps is based on a flexible model of navigation structures, navigation elements, and system-level features. Together, they enable a variety of intuitive user experiences for moving between apps, pages, and content. In some cases, you might be able to fit all of your app's content and functionality onto a single page without requiring the user to do anything more than pan to navigate through that content. However, the majority of apps typically have multiple pages of content and functionality with which to explore, engage, and interact.