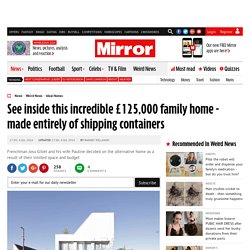 Dubbed the 'Flying Box', it was built for just £125,000 by Frenchman Josu Gillet as a result of his limited space and budget. And he now lives there with his wife and young son. The structure uniquely incorporates five 'high cube' shipping containers - an extra-large variant of the transportation device that measures 40ft long. Josu and his wife, Pauline, completed the build in just three months - only six months after purchasing the 160sqm plot in the French village of Org res, near Rennes. How Sir Richard Branson Finds Profitable Business Ideas. Sir Richard Branson, one of the world’s most recognizable billionaires, and founder of Virgin Group, has built an empire on the principle of pursuing his frustrations and finding their solutions. 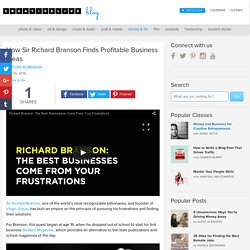 For Branson, this quest began at age 16, when he dropped out of school to start his first business Student Magazine, which provided an alternative to the stale publications and school magazines of the day. Since then, the number of companies under Virgin’s umbrella has grown to over 400. They range from airlines to record stores, fitness clubs, banking institutions, space travel and more. CreativeLive: Free Live Online Classes - Learn. Be Inspired. GOOD Magazine. Career Guidance. 99 Sites That Every Professional Should Know About and Use. How Drunkards, Whores & 'The Immoral' Shaped the Nation (w/ Thaddeus Russell) Top 10 As Seen On TV Products That Were Surprisingly Awesome. 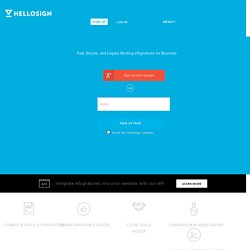 A Flexible and Powerful Tool For Business BUSINESS CLASS FEATURES All the tools your business needs to work efficiently including team management controls, customized templates and company branding. “HelloSign is the single greatest invention in the history of the internet.” Executive Director, envoys.com Our Customers Love Us Start Signing Today. HelloSign Products The Fine Print Email Updates. Travel Hacking a Dream Trip For Free. Don’t you just love a good vacation? 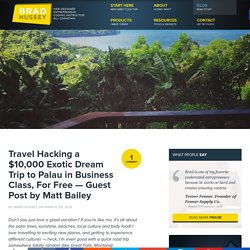 If you’re like me, it’s all about the palm trees, sunshine, beaches, local culture and tasty food! I love travelling to exciting new places, and getting to experience different cultures — heck, I’m even good with a quick road trip somewhere totally random (like Great Falls, Montana). Now imagine your dream trip. What does it look like? Honestly, for me, because I have kids and flying can be a bit stressful, it looks a bit like this: Mothers of Invention Presented By Women In the World (Paid Post by toyota From The New York Times) You Know You're A Child Of The '80s If... We crowdsourced our totally tubular YMC bloggers and staff to reminisce about their childhoods and tell us: The final scene in Sixteen Candles will forever remain your benchmark for romance. 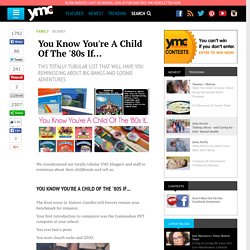 Your first introduction to computers was the Commodore PET computer at your school. 31 Baking Soda Uses - Uses for Baking Soda. How to Create a Cottage-Style Garden. Legally Binding Electronic Signatures. 31 Google Drive Tips You Can't Afford to Miss - Collaborate Well with Others. Click To View Slideshow» Google's online office suite and storage service has come a long way, becoming the tool of choice for many. 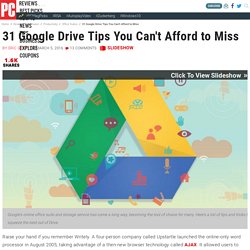 Here's a list of tips and tricks to squeeze the best out of Drive. Raise your hand if you remember Writely. A four-person company called Upstartle launched the online-only word processor in August 2005, taking advantage of a then-new browser technology called AJAX. It allowed users to instantly save and retrieve content generated in the browser but stored on the server. At the time, a product like Writely was unique (the software didn't come on a CD), but still considered a gamble. Fast forward almost a decade.

It's a full suite of tools that now takes on Microsoft's far more mature Office; in fact, Google Drive's very presence in the market arguable drove Microsoft to create its own Office Online versions of Word, Excel, and PowerPoint to work with its OneDrive storage/sync service. Would You Use Virtual Reality to Renovate Your Home? Is Amazon Underground the answer to Indian developers' monetisation woes? - The Graphic Slate. Amazon Underground offers paid apps for free - but with a sting in the tail- The Inquirer. AMAZON has made an audacious move to bring the fight to Google with the announcement of Amazon Underground, a revamp of its Android all-in-one app offering free downloads of paid apps on a permanent basis. 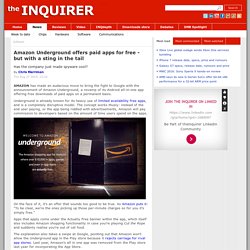 Underground is already known for its heavy use of limited availability free apps, and is a completely disruptive model. The concept works thusly: instead of the end user paying, or the app being riddled with advertisements, Amazon will pay commission to developers based on the amount of time users spend on the apps. A Cleaning Schedule You Can Stick To. Dome Homes Made from Inflatable Concrete Cost Just $3,500. Inflatable concrete homes, sounds like something from a science-fiction movie when in fact it is reality. 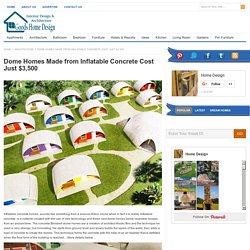 Inflatable concrete, is a material created with the use of new technology and these next dome homes below resemble houses from an ancient time. The concrete Binishell dome homes are a creation of architect Nicolo Bini and the technique he used is very strange, but innovating. He starts from ground level and slowly builds the layers of the walls, then adds a load of concrete to create the domes. This technique forms the concrete with the help of an air bladder that is deflated when the final form of the building is reached….More details below… more details here…. via Inhabitat. Amazing trees. Trees are the oldest and the largest living things on earth. 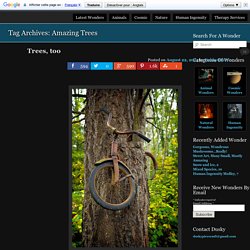 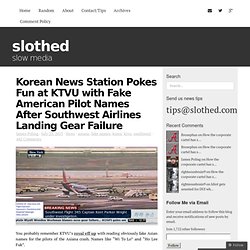 Names like “Wi To Lo” and “Ho Lee Fuk”. It looks like a Korean news agency is having some fun at KTVU’s expense. After the landing gear failure of the Southwest flight at LGA they showed this graphic with American pilot names “Captain Kent Parker Wright”, “Co-Captain Wyatt Wooden Workman”. They even went as far as making up fake names for people to interview. Flight instructor “Heywood U. INFP – Persephone, the Idealist and the Healer. Welcome to the second part of the Myers-Briggs personality type blog series.

Good Deeds Just A Click Away. Earn Reward Points and Redeem Them For Free Stuff at Swagbucks.com.