It’s 2015, and LightSwitch is dead… Now what? In case I haven’t seen you yet this year (and chances of that are high since I spent almost all of my time in my hammock so far), happy new year to you! 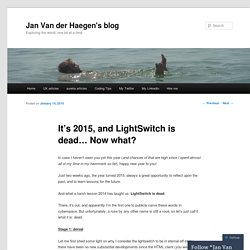 Just two weeks ago, the year turned 2015, always a great opportunity to reflect upon the past, and to learn lessons for the future. And what a harsh lesson 2014 has taught us: LightSwitch is dead. There, it’s out, and apparently I’m the first one to publicly carve these words in cyberspace. But unfortunately, a rose by any other name is still a rose, so let’s just call it what it is: dead. Stage 1: denial If you want to try denying a technology being dead simply due to lack of evolution, then here’s a quote from the team latest post: we’re currently planning to actively engage with the community and start our discussions on the roadmap in the middle of next year Our love is dead, and you have been feeling it for a while now. Perhaps you haven’t admitted it to yourself. Stage 2: anger Stage 3: bargaining We’re still reflecting the pain of 2014. 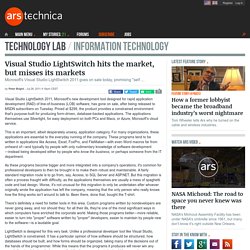 Priced at $299, the product provides a constrained environment that's purpose-built for producing form-driven, database-backed applications. The applications themselves use Silverlight, for easy deployment on both PCs and Macs, or Azure, Microsoft's cloud service. This is an important, albeit desperately unsexy, application category. For many organizations, these applications are essential to the everyday running of the company. These programs tend to be written in applications like Access, Excel, FoxPro, and FileMaker—with even Word macros far from unheard of—and typically by people with only rudimentary knowledge of software development—instead being developed either by people who know the business, or perhaps someone from the IT department. Beginning LightSwitch in VS 2013 Part 1: What’s in a Table? Describing Your Data. NOTE: This is the Visual Studio 2013 update of the popular Beginning LightSwitch article series. 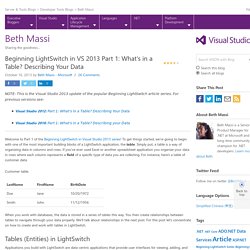 For previous versions see: Welcome to Part 1 of the Beginning LightSwitch in Visual Studio 2013 series! To get things started, we’re going to begin with one of the most important building blocks of a LightSwitch application, the table. Simply put, a table is a way of organizing data in columns and rows. If you’ve ever used Excel or another spreadsheet application you organize your data in rows where each column represents a field of a specific type of data you are collecting.

Customer table. When you work with databases, the data is stored in a series of tables this way. Tables (Entities) in LightSwitch Applications you build with LightSwitch are data-centric applications that provide user interfaces for viewing, adding, and modifying data. Entities are how LightSwitch represents data and are necessary to assemble an application.

An End-To-End Visual Studio LightSwitch 2013 HTML5 Application. Download the project from here: Live Demo: (use your username and password from. 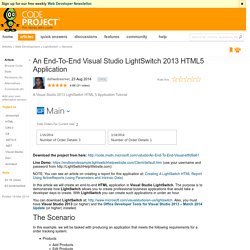 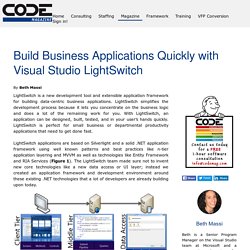 LightSwitch simplifies the development process because it lets you concentrate on the business logic and does a lot of the remaining work for you. With LightSwitch, an application can be designed, built, tested, and in your user’s hands quickly. Get Started Building SharePoint Apps in Minutes with LightSwitch. I’ve dabbled in SharePoint 2010 development in the past by using Visual Studio. 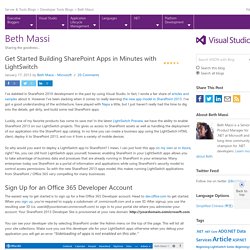 In fact, I wrote a fair share of articles and samples about it. However I’ve been slacking when it comes to really learning the new app model in SharePoint 2013. I’ve got a good understanding of the architecture, have played with Napa a little, but I just haven’t really had the time to dig into the details, get dirty, and build some real SharePoint apps. Luckily, one of my favorite products has come to save me! In the latest LightSwitch Preview, we have the ability to enable SharePoint 2013 on our LightSwitch projects. So why would you want to deploy a LightSwitch app to SharePoint? Sign Up for an Office 365 Developer Account The easiest way to get started is to sign up for a free Office 365 Developer account. Survey App Tutorial: Developing a SharePoint Application Using LightSwitch in C#, VB.NET for Visual Studio 2012. Get Started Building SharePoint Apps in Minutes with LightSwitch. Visual Studio LightSwitch. LightSwitch Help Website > Blog - An End-To-End Visual Studio LightSwitch 2013-2015 HTML5 Application.

Mar 18 Written by: Michael Washington 3/18/2014 4:43 AM Live Demo: (use your username and password from NOTE: You can see an article on creating a report for this application at: Creating A LightSwitch HTML Report Using ActiveReports (using Parameters and Intrinsic Data) 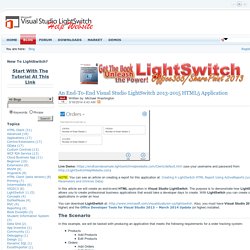 LightSwitch Help Website > Blog - How To Get Visual Studio LightSwitch For Free.