Riccardo Tisci: 10 Pieces That Sum Up His 10 Years at Givenchy. He’s one of the biggest names in fashion, and he’s earned that reputation entirely at the helm of one house: Givenchy. 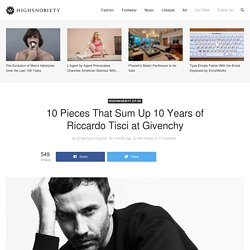 Now, after a decade at the Parisian house, we look back on 10 years of Riccardo Tisci through 10 of his most trend-defining items. As the revolving door of Europe’s top fashion houses spins ever faster, many of those placed in the creative director’s chair have struggled to really leave their mark before departing for pastures new. Riccardo Tisci is one huge exception to this rule. The Italian-born designer has remained loyal to Givenchy since his appointment in 2005 and, in the process, defined a brave, successful new identity for the brand entirely of his own creation. Top 10 luxury brand efforts of Q3. Louis Vuitton’s flower trunk with zinc tub, 1910 In the third quarter of 2015, luxury brands reinterpreted codes to delve further into brand heritage and strengthen ties to core consumers. 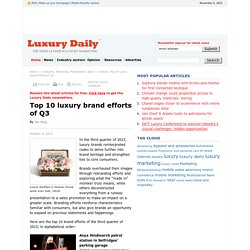 Brands overhauled their images through rebranding efforts and exploring what the “made in” moniker truly means, while others deconstructed everything from a runway presentation to a sales promotion to make an impact on a greater scale. Branding efforts reinforce characteristics familiar with consumers, but also give brands an opportunity to expand on previous statements and happenings. How handbags became a worthy investment. Underage Models Are About to Become a Government Issue. The use of underage models has been a prevalent issue in fashion for years, and one that the industry, both in the United States and abroad, has attempted to regulate via dictums from overseeing bodies like the Council of Fashion Designers of America and the British Fashion Council. 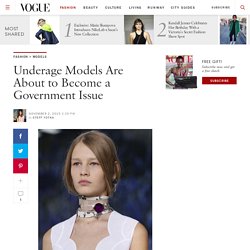 But the matter of minors on the runway and in magazines has been hard to manage without any hard-set repercussions for those who do not follow the industry’s self-imposed rules. That may change—in the United States, at least—thanks to a bill introduced by representative Grace Meng of New York’s Sixth District. Called the Child Performers Protection Act of 2015, the bill would, among other things, limit the hours an underage model could work and require her or him to be paid a monetary sum instead of the common practice of gifting models clothes or accessories.

“Working as a child model or actor can be an incredible opportunity and lead to success for a lifetime,” representative Meng told The New York Times. Riccardo Tisci Extends Givenchy Contract - Three More Years As Designer At Fashion House. Riccardo Tisci: I took Givenchy job for money. The fashion designer was appointed the prestigious role in February 2005 and has taken the label from strength to strength since, winning fans such as Kim Kardashian, Amanda Seyfried and Uma Thurman along the way. 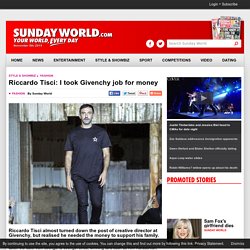 At the CFDA/Vogue Fashion Fund event on Monday (02Nov15) Riccardo took time to reflect upon his job, which he admits he didn't even want at first. "When they asked me, I was at a moment in my life where I was very young and just about to find my own identity so I didn't really want to take the job," he told Vogue European editor-at-large Hamish Bowles. "I was completely panicked about it. Financially my family was not doing well, so that was the reason I said yes to this job. " Online luxury sales are surging in China, claims study. Nline deals for luxury goods are surging in China, according to a new KPMG report. 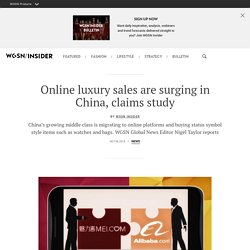 The report, in association with luxury online retailer mei.com, suggests China’s growing middle class is migrating to online platforms from brick & mortar outlets to buy products such as luxury watches, bags and “other status symbols”. The report, based on a survey of more than 10,000 consumers of luxury goods, claims 45% of respondents chose e-commerce sites as their top choice for buying luxury items. On average, they spend CNY2,300 ($362) per deal online, up by almost a third from a year earlier. Social networking sites and smart phones are luring more and more buyers of luxury goods to shopping websites, the report said. Secure online payment tools appear to reassure consumers.

Models carrying handbags "dripping with blood" took to the streets of central London today to protest the use of exotic animal skins on the catwalk. 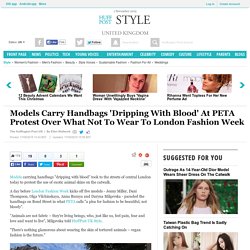 A day before London Fashion Week kicks off five models - Jenny Miller, Dani Thompson, Olga Vilchinskaya, Anna Buraya and Daryna Milgevska - paraded the handbags on Bond Street in what PETA calls "a plea for fashion to be beautiful, not bloody". "Animals are not fabric – they're living beings, who, just like us, feel pain, fear and love and want to live", Milgevska told HuffPost UK Style.

"There's nothing glamorous about wearing the skin of tortured animals – vegan fashion is the future. " PETA (People for the Ethical Treatment of Animals) is an organisation that aims to protect the rights of animals. Home. Home. Nicki Minaj hits at Tyga in 'Pervert 17' shirt in Feeling Myself video. By Karen Mizoguchi for MailOnline Published: 01:18 GMT, 19 May 2015 | Updated: 08:45 GMT, 21 May 2015. 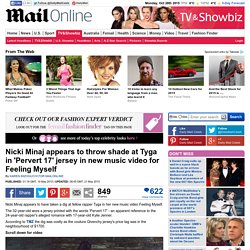 Made in where? Those lies, damned lies and labels. "Made in Italy" doesn't always give the full picture. 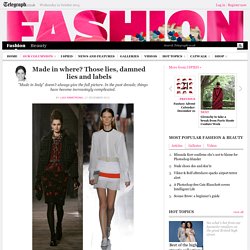 In the past decade, things have become increasingly complicated. BY Lisa Armstrong | 21 December 2012 Made in Scotland: Chanel, and Made in the UK: Victoria Beckham Photo: Vladimir Potop A few weeks ago I was in New York, interviewing the grand fromage - or should that be the Big Pretzel? What luxury marketers should expect in 2015 - Luxury Daily- Research. Promotional image for SaksStyle In 2014, luxury brands had a positive year as marketing strategies saw influence from research results, and in 2015 researchers are predicting a forward-looking outcome as new marketing plans are implemented into a more stable economy. 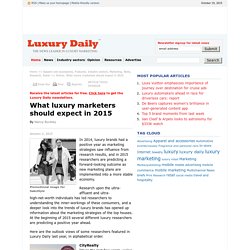 Research upon the ultra-affluent and ultra-high-net-worth individuals has led researchers to understanding the inner-workings of these consumers, and a deeper look into the trends of luxury brands has opened up information about the marketing strategies of the top houses. Luxury Market and Trends 2014 - 2015. Our Editor in Chief and Luxury Lifestyle Presenter Richard Crawford of Richard Crawford Luxury shares his perspective on the luxury sphere. 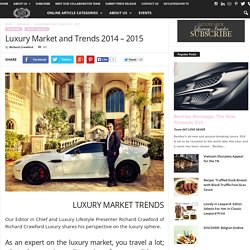 As an expert on the luxury market, you travel a lot; what changes in audiences’ preferences did you notice in 2014? I have noticed in the last few years that consumers are learning to appreciate the experience of luxury more. Its not just about the brand name or its product function, its about understanding creative process or ideals and making an emotional connection with the brand. A more in depth appreciation leads to a much fuller and integrated experience for the consumer and ultimately an extremely satisfying one. It’s not unusual now to see brands offer an experiential and interactive element as part of the sales approach and consumers are quick to participate. What in your view are the features that distinguish a luxury brand from an excellent quality brand? Luxury Market and Trends 2014 - 2015. The luxury sector in China and Hong Kong. China's economic slowdown: The ripple effects for Burberry and luxury brands. Clearly, 2015's been challenging for luxury goods and like other brands, Burberry faces a host of challenges alongside China.

Maintaining popularity in their developed markets and handling currency swings are key, but getting to grips with a rapidly transforming consumer culture is also very significant in the luxury market. "Consumers are becoming far more discerning and are looking for exclusive luxury products and one-off pieces that are original," Fflur Roberts, head of luxury goods at Euromonitor International, told CNBC via email. Spring 2015 Worldwide Luxury Goods Update - press release. According to Bain & Company's spring luxury update, market dynamics and discontinuity necessitate a long-term strategic approach to the global pricing and distribution paradigm for luxury brands Milan – May 21, 2015 – The global personal luxury goods market reached €224 billion in revenue (at retail equivalent value) in 2014, up by 3 percent compared to 2013 (+4 percent without considering currency effects).

That upward trajectory continued in the first quarter of 2015, when a weak Euro boosted the nominal performance of the market by 12-13 percent – inflating a low single-digit positive trend of 2-3 percent growth at a constant exchange rate. The market's full-year performance is expected to increase 2-4 percent at constant currency. Birmingham City University - Sign In. 20 Advertisements From the Last 10 Years of Fashion. 20 Fashion Advertisements – With the pace of fashion going at what seems like an almost never-ending rate, it is nice to sometimes take a look back. We decided what better way to pay homage to fashion’s past than by highlighting some of the most memorable campaigns from the past ten years? Take a stroll down memory lane with twenty fashion advertisements from the last decade featuring some of the industry’s top models. Yves Saint Laurent Fall 2003 Before Saint Laurent dropped the Yves, its fall 2003 advertisements paid tribute to the brand’s heritage with a seventies glam campaign featuring models Adina Fohlin and Julia Stegner.

Thu, 1 October 2015. Fashion Brands in Investors’ Headlights. Photo Fashion trends may change with seasons, but one that has never gone out of style is the appetite for brand acquisition by groups both in and out of the 230 billion euro luxury sector. Big-name deals in the last 12 months have primarily involved groups, including a buyout of Roberto Cavalli by the Italian company Clessidra in April and investment in Proenza Schouler by Castanea Partners of Massachusetts in June. That activity followed years of industry consolidations, largely fueled by an arms race for acquisitions between the leading luxury conglomerates LVMH Moët Hennessy Louis Vuitton and Kering. But the slowdown in demand from China as a result of its cooling economy, coupled with continuing currency volatility, has damped growth — and has probably led to more caution in spending for many major companies.

Prudent does not mean entirely paused however, and conversations, as well as rumors, persist. So which brands, if any, could be takeover candidates? BoF. History and background of Givenchy. 1927, the year the Musketeers triumphed at the Davis Cup, the year Charles Lindbergh flew nonstop across the Atlantic Ocean and the year Hubert deGivenchy was born at No 24, rue Saint-Louis in Beauvais (France). Short history of Givenchy. The global fallout from China’s stock market crash may be coming your way. China’s market downfall has been dramatic and painful for the investors involved. But so far there has been little immediate impact on the rest of the world, because China tightly limits foreign investment in mainland stocks.

@fashioncityinsider #Fashion City Insider Instagram Photos - InstaWebgram. Fashioncityinsider13 3 Recalling our amazing visit to Bilbao for the Art & Fashion Forum. Donatella Versace revealed as the new face of Givenchy. Givenchy campaign ad revealed starring rival designer Donatella Versace. Forbes Welcome. Balmain SS16 show report Paris Fashion Week. ©Catwalking.com The supermodel Gigi Hadid made a statement of defence this week after she received criticism regarding her body shape. “Yes, I have boobs, I have abs, I have a butt, I have thighs, but I’m not asking for special treatment. I’m fitting into the sample sizes,” Hadid wrote on a post on Instagram.