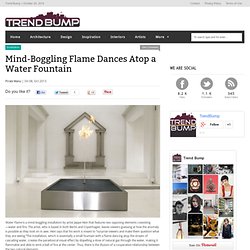 The artist, who is based in both Berlin and Copenhagen, leaves viewers guessing at how the anomaly is possible as they look on in awe. Hein says that his work is meant to “surprise viewers and make them question what they are seeing.”The installation, which is essentially a small fountain with a flame dancing atop the stream of cascading water, creates the paradoxical visual effect by dispelling a dose of natural gas through the water, making it flammable and able to emit a ball of fire at the center. Thus, there is the illusion of a cooperative relationship between the two natural elements. 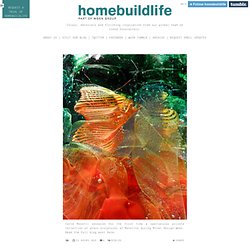 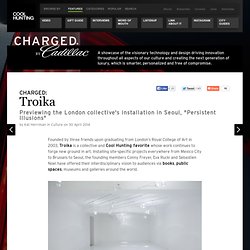 Founded by three friends upon graduating from London’s Royal College of Art in 2003, Troika is a collective and Cool Hunting favorite whose work continues to forge new ground in art. Installing site-specific projects everywhere from Mexico City to Brussels to Seoul, the founding members Conny Freyer, Eva Rucki and Sebastien Noel have offered their interdisciplinary vision to audiences via books, public spaces, museums and galleries around the world. Take their recent absurdist sculpture “The Weather Yesterday,” which was set in London's Hoxton Square and displayed, as you might imagine, yesterday's weather in post-real-time. Front and center was the group's playful take on the British obsession with the weather as well as modern society's obsessive, almost compulsive, desire to be up-to-date—reorienting the conversation from future to past while utilizing the same digital technology. 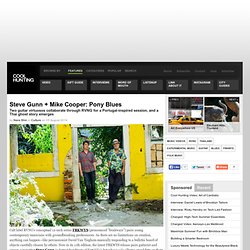 As there are no limitations on creation, anything can happen—like percussionist David Van Tieghem musically responding to a bulletin board of objects carefully chosen by others. Now in its 11th edition, the latest FRKWYS release pairs guitarist and singer-songwriter Steve Gunn (a former bandmate of Kurt Vile's but whose solo albums stand firm on their own) with folk-blues guitar legend Mike Cooper (developing a taste for the avant-garde, and Hawaiian shirts, over time). The album Cantos de Lisboa not only bridges different generations, but also represents ties across many borders: Brooklyn-based Gunn and Rome-based Cooper met and recorded in Portugal, and the music video debut for the track "Pony Blues" was made in Thailand.

The connection rural Thais have to the spirit world is akin to the spirituality of the American South. "Shadowing" Street Project, Bristol. Walk down the streets of Bristol—a university city in England’s West Country—after dark, and while passing under a streetlight, you might find yourself sharing the illuminated circle with the ghosts of visitors past: someone else’s shadow walking beside you. 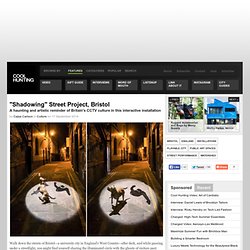 Meanwhile, your own shadow is spirited away to accompany the next person who walks under the light. That’s the haunting premise of "Shadowing," a new interactive art piece that was the winner of Watershed’s Playable City Award 2014. The award challenges artists and creatives from around the world to produce an artwork that engages with the notion of cities as playable, malleable and idiosyncratic public spaces. "Shadowing" (which is taking over eight streetlights in Bristol) was created by Canadian interaction designer Jonathan Chomko and British designer Matthew Rosier. The installation plays on our interaction with the city and turns established facts upside down by introducing a curious, joyful time-lapse to the street lights.

10 Most Surreal Light Installations at Lyon’s Festival of Lights. Pirate Manu | On 08, Dec 2013 The Festival of Lights in Lyon, France (or Fête des Lumières) kicked off on December 6th bringing with it dazzling light displays by artists from around the world. 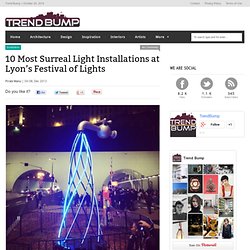 “Every year we ask the artists to propose their concepts based on locations,” explained Jean-François Zurawik, General coordinator of the festival to Euronews. “We ask them to use the city as a huge backdrop, and to make proposals for parks, buildings, theaters, town hall, etc,” he said. By the end of it, between three and four million visitors are expected to have walked around the French city to see the highly impressive light installations, which this year include 80 works by 120 designers. Source:

Crime-Predicting Robots : police robot. Knightscope is like a police robot that's designed to keep eyes on a community, for security purposes. 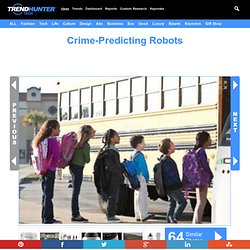 The Knightscope K5 Autonomous Data Machine makes use of autonomous technology to crowdsource real-time data and make predictions in order to determine whether authorities should be notified of a disruptive event. Photography.