(KVRR) - A North Dakota State Representative wants you to be able to carry a loaded concealed firearm without a permit. Eleven other states have implemented what are called “constitutional carry laws” while another four have adopted limited versions of the law. Speeches Archive. App h. American Recovery and Reinvestment Act. Board Meeting Minutes. Bismarck Airport - Bismarck, ND August 16, 2016 Treasurer John Shorey called the meeting to order at 11:01 a.m. 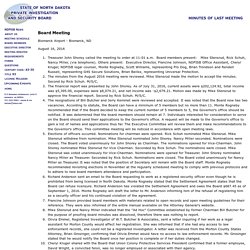 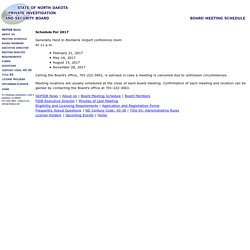 February 21, 2017 May 16, 2017 August 15, 2017 November 28, 2017 Calling the Board's office, 701-222-3063, is advised in case a meeting is cancelled due to unforseen circumstances. Meeting locations are usually scheduled at the close of each board meeting. Confirmation of each meeting and location can be gained by contacting the Board's office at 701-222-3063. Title 93: Administrative Rules. The North Dakota Private Investigation & Security Board is a governor appointed board that licenses and regulates the Private Investigation and Security industries. 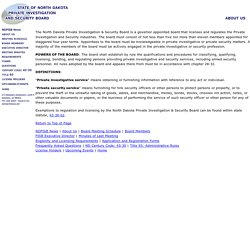 The board must consist of not less than five nor more than eleven members appointed for staggered four year terms. Appointees to the board must be knowledgeable in private investigative or private security matters. A majority of the members of the board must be actively engaged in the private investigative or security profession. POWERS OF THE BOARD: The board shall establish by rule the qualifications and procedures for classifying, qualifying, licensing, bonding, and regulating persons providing private investigative and security services, including armed security personnel. The State of North Dakota Private Investigation and Security Board. NDPISB News | About Us | Board Meeting Schedule | Board Members | PISB Executive Director Minutes of Last Meeting | Eligibility and Licensing Requirements Application and Registration Forms | Frequently Asked Questions ND Century Code: 43-30 | Title 93: Administrative Rules | License Holders | Upcoming Events. 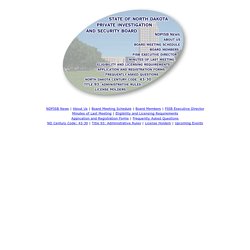