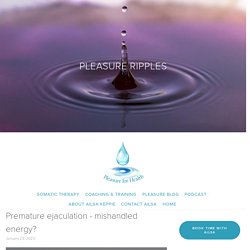 Premature Ejaculation - The Ultimate Mindful Guide [2017] It is a far too common (and partly unjustified) concern for men whether or not they last long enough in bed to satisfy their partners. 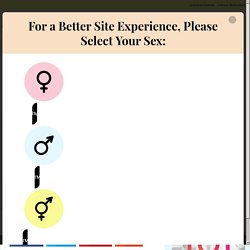 The truth is no matter how much sexual confidence a man tries to boast in front of his friends, we all have wondered at one point or another if we could do something to last a little longer in bed. If you’re looking for a way to master the art of ejaculation control and make sure you come out as an expert lover every time you have sex with someone, we’ve got you covered. This article will teach you how to control your orgasms, but more importantly, it will help you end all the questions and concerns you may have around the topic of premature ejaculation.

How to Last Longer in Bed - Charlie Glickman PhD. Here’s a question that someone sent me: I’m sure you’ve covered this at some point already but I was curious if you had any suggestions for lasting longer? 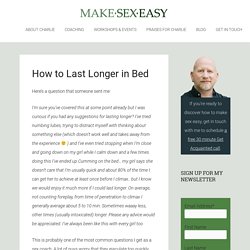 I’ve tried numbing lubes, trying to distract myself with thinking about something else (which doesn’t work well and takes away from the experience ) and I’ve even tried stopping when I’m close and going down on my girl while I calm down and a few times doing this I’ve ended up Cumming on the bed… my girl says she doesn’t care that I’m usually quick and about 80% of the time I can get her to achieve at least once before I climax.. but I know we would enjoy it much more if I could last longer. On average, not counting foreplay, from time of penetration to climax I generally average about 5 to 10 min. Sometimes waaay less, other times (usually intoxicated) longer. 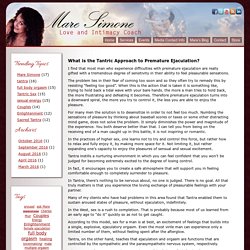 I find that most man who experience difficulties with premature ejaculation are really gifted with a tremendous degree of sensitivity in their ability to feel pleasurable sensations. The problem lies in their fear of coming too soon and so they often try to remedy this by resisting “feeling too good”. When this is the action that is taken it is something like, trying to hold back a tidal wave with your bare hands. the more a man tries to hold back, the more frustrating and defeating it becomes. Therefore premature ejaculation turns into a downward spiral, the more you try to control it, the less you are able to enjoy the pleasure. Premature Ejaculation.. Bye-Bye! 6 Unusual Ways To Last Looooonger. About Me Jacques Drouin has been studying and practicing the Tantric Arts for over 30 years. 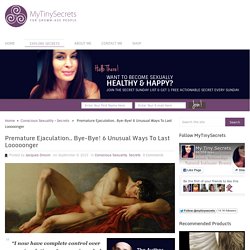 He is the Co-Founder of Tibetan Tantra™ and is the very first westerner given permission and qualification to provide instruction in the Secret Tibetan Five Element Sexual Teachings. Jacques focuses on awakening men to their true sexual potential, and supporting women in being sexually empowered and healed. Jacques has been featured as a Tantric Sexuality Expert on: Playboy Radio, Sex & Happiness, Ultimate Tantra Summit, Sexy in Vancity, and Consious Living Network Radio. He was an official co-host on Figure It Out!

“I now have complete control over my ejaculations. Tantric Therapy for Premature Ejaculation. Premature ejaculation (PME) is very common in males of all ages. 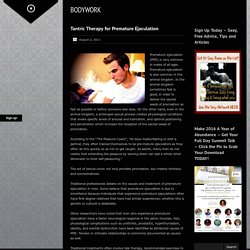 Premature ejaculation is also common in the animal kingdom. In the animal kingdom sometimes fast is good; in order to deliver the sacred seeds of procreation as fast as possible or before someone else does. On the other hand, even in the animal kingdom, a prolonged sexual process creates physiological conditions that evoke specific levels of arousal and lubrication, and optimal positioning and penetration which increase the reception of the sacred seeds of procreation. According to the “The Pleasure Coach”, “As boys masturbating or with a partner, they often trained themselves to be pre-mature ejeculators as they often do this quickly so as not to get caught. As adults, many men do not realize that extending the pleasure by slowing down can add a whole other dimension to their self-pleasuring.”

The act of sexual union not only provides procreation, but creates intimacy and connectedness. Tantra Essence with Ma Ananda Sarita & her kaula team. Sarita loves to answer your questions, so if there’s something you’d like her advice on, please email her and let her know if you are happy for it to be published (you can remain anonymous). 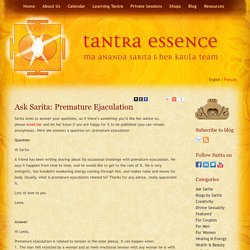 Here she answers a question on: premature ejaculation Question.