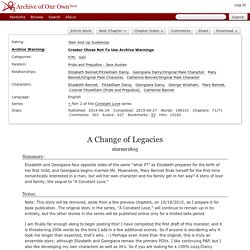 "Let us leave for Gretna Green tonight. " "I cannot – I do not – I do not think I am ready to leave so soon. "I own it may seem sudden for you, but I have been in love with you for so long. "I would like to at least speak with Fitzwilliam, first – " "Oh, my precious Georgiana, I understand, but it may be some time before he visits. "I think it might be better to at least wait until Monday, as we had planned originally. " "It pains me that you think so, my darling," he said. "But – my brother – " "I am sure your brother will be exceedingly happy to find we have wed.

"Fitzwilliam says I am too young to have a season for several years more. " "Do you think I am a burden to him? " "My love, of course you are, but I promise you shall never be a burden to me. " "Let us go tonight, then," she said, feeling a strange wave of dizziness at having made the decision. "Mrs. Mr. Henry's Legacy Chapter 1, a pride and prejudice fanfic. Prologue Longbourn, September 1795 Henry Bennet saw bright eyes and chestnut curls just under the cabinet in the corner of his laboratory. 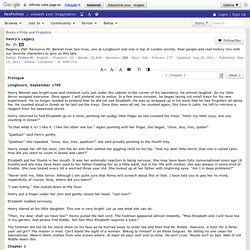 He almost laughed. So my little terror escaped everyone. Once again. Henry returned to find Elizabeth up on a stool, pointing her pudgy little finger as she counted the trays. What if Mr Darcy refused to take no for an answer? Chapter 1, a pride and prejudice fanfic. Elizabeth felt herself growing more angry every moment; yet she tried to the utmost to speak with composure when she said, ``You are mistaken, Mr Darcy, if you suppose that the mode of your declaration affected me in any other way, than as it spared me the concern which I might have felt in refusing you, had you behaved in a more gentlemanlike manner.'' She saw him start at this, but he said nothing, and she continued, ``You could not have made me the offer of your hand in any possible way that would have tempted me to accept it.'' Again his astonishment was obvious; and he looked at her with an expression of mingled incredulity and mortification. 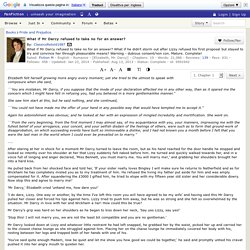 She went on. After staring at her in shock for a moment Mr Darcy turned to leave the room, but as his hand reached for the door handle he stopped and looked so intently over his shoulder at her that Lizzy suddenly felt naked before him. 'Mr Darcy,' Elizabeth cried 'unhand me, how dare you! ' 'I do dare, Lizzy. 'Stop this! 'Ready to say yes yet? A New Beginning Chapter 1, a pride and prejudice fanfic. It was a warm day in early Autumn and Miss Elizabeth Bennet was in flight from her home. 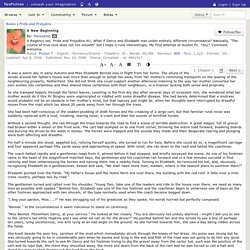 The allure of the woods around her father's house was more than enough to tempt her away from her mother's continuing transports on the leasing of the neighbouring property, Netherfield. She did not think she could support another afternoon listening to the way her mother converted her own wishes into certainties and then shared these certainties with their neighbours, in a manner lacking both sense and propriety.

As she tramped happily through the fallen leaves, revelling in the first dry day after several days of incessant rain, she wondered what her mother would do if this Mr Bingley were unprincipled or riddled with some dreadful disease. She had barely determined that a mistress would probably not be an obstacle in her mother's mind, but that leprosy just might be, when her thoughts were interrupted by dreadful noises from the road which lay about 20 yards away from her through the trees. Sparks Fly, Tires Skid Chapter 2: Traffic: Part II, a pride and prejudice fanfic. Cesarino plans fell through. 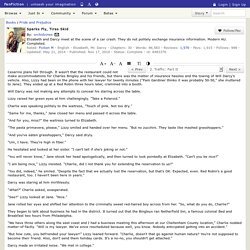 It wasn't that the restaurant could not make accommodations for Charles Bingley and his friends, but there was the matter of insurance hassles and the towing of Will Darcy's vehicle. Also, Lizzy had been on the phone with her lawyer for twenty minutes ("Pam Gardiner thinks it was probably 50-50," she muttered to Jane). They ended up at a Red Robin three hours later, crammed into a booth. Will Darcy was not making any attempts to conceal his staring across the table. Lizzy raised her green eyes at him challengingly.

Charlie was speaking politely to the waitress, "Touch of pink. "Same for me, thanks," Jane closed her menu and passed it across the table. "And for you, miss? " "The pasta primavera, please," Lizzy smiled and handed over her menu. "And you've eaten grasshoppers," Darcy said dryly. "Um, I have. He hesitated and looked at her sister. "You will never know," Jane shook her head apologetically, and then turned to look pointedly at Elizabeth.