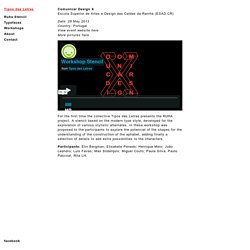 A stencil based on the modern type style, developed for the exploration of various stylistic alternates. In these workshop was proposed to the participants to explore the potencial of the shapes for the understanding of the construction of the aphabet, adding finally a selection of details to add extra possibilities to the characters. Participants: Elin Bergman; Elisabete Penedo; Henrique Melo; João Leandro; Luis Favas; Max Soderquis; Miguel Couto; Paula Silva; Paulo Pascoal; Rita LH. Regal Finesse Pro. Available Font Formats Currently we offer the following font formats for immediate download after purchasing.Desktop (otf) for all desktop applications with a standard license for 5 workstations. 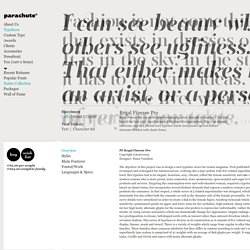 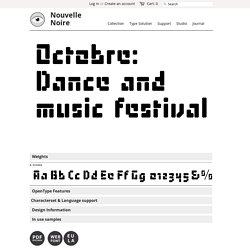 The letters are designed as solid bricks, but with a pattern of missing parts that suggests stencil letters.Apeloig created the font during a 1993/94 residency at the Villa Medici at the French Academy of Art in Rome. The experimental typeface evokes the festival’s program of dance and music (both classical and contemporary), performed by world renowned conductors and musicians. TypeNetwork. Bayer condensed, typeface de Paulo Heitlinger, segundo Herbert Bayer, Bauhaus. tipografos.net. Aeronaut - Experimental - Font Categories - Browse fonts. RP - Digital Type Foundry. Typographies.fr. 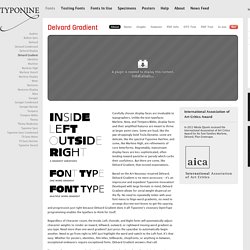 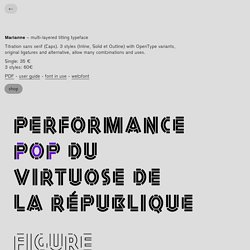 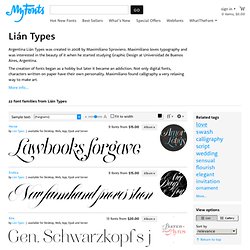 Maximiliano loves typography and was interested in the beauty of it when he started studying Graphic Design at Universidad de Buenos Aires, Argentina. The creation of fonts began as a hobby but later it became an addiction. Not only digital fonts, characters written on paper have their own personality. Maximiliano found calligraphy a very relaxing way to make art.

Information. Insigne Design was founded as DooleyType in 2004, and since then, Insigne Design has released a wide variety of quality typefaces, including sans serifs, scripts, serifs and experimental forms. 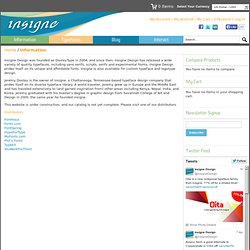 Insigne Design prides itself on its unique and affordable fonts. Insigne is also available for custom typeface and logotype design. Jeremy Dooley is the owner of insigne, a Chattanooga, Tennessee-based typeface design company that prides itself on its diverse typeface library. A world traveler, Jeremy grew up in Europe and the Middle East and has traveled extensively to (and gained inspiration from) other areas including Kenya, Nepal, India, and Korea. Jeremy graduated with his master’s degree in graphic design from Savannah College of Art and Design in 2005, the same year he founded insigne. This website is under construction, and our catalog is not yet complete. Distributors FontHaus Fonts.comFontSpringHypeForTypeMyFonts.comPhil's Fonts TypekitYouWorkForThem. Neutraface. Studio Les Graphiquants - typographies. Nouvelle Noire. Download Tungsten Fonts. 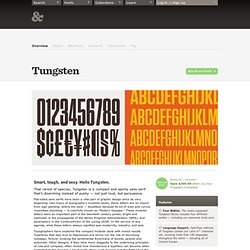 Hello Tungsten. That rarest of species, Tungsten is a compact and sporty sans serif that’s disarming instead of pushy — not just loud, but persuasive. Flat-sided sans serifs have been a vital part of graphic design since its very beginning. Like many of typography’s loveliest styles, these letters are an import from sign painting, where the style — doubtless because its kit of lines and curves resembles plumbing — is colorfully known as "Modern Gaspipe.

" These modular letters were an important part of the twentieth century poster, bright and optimistic in the propaganda of the Works Progress Administration (WPA), and peremptory in the Constructivism of the young USSR. Typographers have explored this compact modular style with mixed results. A few years ago, we started wondering if there was a way to make a typeface in this genre that was disarming instead of brutish, one that employed confidence and subtlety instead of just raw testosterone. Letters from Sweden. Welcome to the Font Diner - Cool Retro Fonts! Font Diner Type Foundry. Stuart Sandler launched the Font Diner foundry in 1996 and has become a major resource for retro design software products. 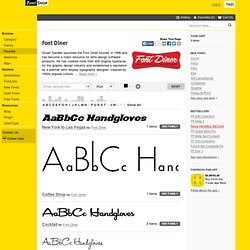 He has created more than 400 original typefaces for the graphic design industry and established a reputation as a premier retro display typography designer, inspired by 1950s popular culture. … Read more »Sandler added a second division to the Font Diner umbrella in 2004, Mister Retro, that features Machine Wash Image Filters™ for Adobe Photoshop and Snappy Hour™ vector images. In 2006, he created the Sideshow type foundry in an effort to release new exclusive display typefaces and collaborative type designs with talented lettering artists the world over. « Read less Stuart Sandler launched the Font Diner foundry in 1996 and has become a major resource for retro design software products. 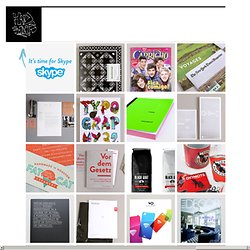 It contains two widths, six weights and three styles, including the curvy, feminine Italic as well as the more conventional Oblique. Although it is inspired by the utilitarian clarity of Swiss type design, subtle curves and fine detailing impart a more playful character to the whole Supria Sans family. Supria Sans™ Condensed is the second component of the Supria type system. Encompassing the same six weights and three styles as Supria Sans, and characterised by the same approach to the modernist source material, this condensed set of fonts is 20% narrower than the normal version, allowing for significant space saving economies.