Shoppers prefer in-store experiences, despite e-commerce boom. Don-Alvin Adegeest London - The death of brick and mortar stores is a long way away, according to new research from Walker Sands Communications. 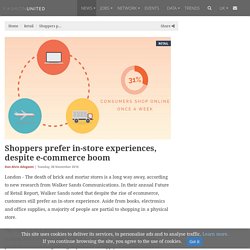 In their annual Future of Retail Report, Walker Sands noted that despite the rise of ecommerce, customers still prefer an in-store experience. Snapchat Spectacles, glasses with a camera, coming this fall - CNET. Like to view the world through Snapchat-colored glasses? 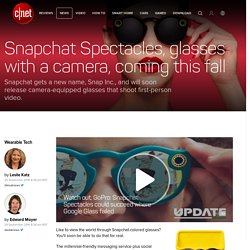 You'll soon be able to do that for real. The millennial-friendly messaging service plus social network plus video hub is set to release "Spectacles," its own smart glasses. The specs shoot first-person video clips, or Snaps, that you can transfer directly to the Snapchat app. The company, which has also renamed itself Snap Inc. to reflect its expansion into consumer hardware, touted the new product Saturday by way of a fashion-friendly website called, appropriately enough, Spectacles.com. John Lewis launches 'Buster the Boxer' Christmas campaign. John Lewis has launched its anticipated festive campaign with a TV advert featuring “Buster the Boxer” bouncing on a trampoline that it hopes “will make people smile”, as it steps away from the “sadvertising” of the past. 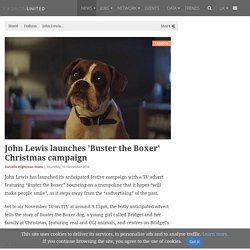 Set to air November 10 on ITV at around 9.15pm, the hotly anticipated advert tells the story of Buster the Boxer dog, a young girl called Bridget and her family at Christmas, featuring real and CGI animals, and centres on Bridget’s obsession with bouncing on beds, a space hopper and sofas. In the two-minute-long film, you see Bridget’s parents setting up her trampoline for Christmas and hiding it in the garden to surprise her on Christmas Day, which then sees all sort of wildlife including foxes, a badger, a squirrel and a hedgehog jumping on it, while Buster looks on through the window.

On Christmas morning, before Bridget can enjoy her present, Buster bounds past her and starts bouncing on her trampoline as she watches him. Holiday shopping will make online history, says report. Don-Alvin Adegeest Holiday shoppers plan to spend a historic amount of time online instead of stores, according to Deloitte’s 31st annual holiday survey of consumer spending intentions and trends. 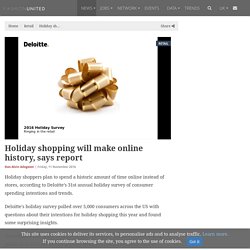 Deloitte's holiday survey polled over 5,000 consumers across the US with questions about their intentions for holiday shopping this year and found some surprising insights. According to this year’s holiday survey, consumers are more likely to shop online than they are to visit popular brick and mortar locations such as discount/value stores and traditional department stores. What a Trump Presidency means for the fashion industry. Los Angeles - In a surprising turn of events, Donald Trump has become the next President of the United States. 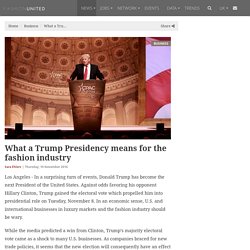 Against odds favoring his opponent Hillary Clinton, Trump gained the electoral vote which propelled him into presidential role on Tuesday, November 8. In an economic sense, U.S. and international businesses in luxury markets and the fashion industry should be wary. The Clothes Show rebranding and moving. Consumer fashion, lifestyle and beauty event The Clothes Show will rebrand to the “British Style Collective presented by The Clothes Show” and move to Liverpool from next year. 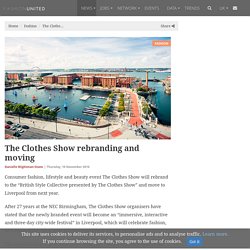 After 27 years at the NEC Birmingham, The Clothes Show organisers have stated that the newly branded event will become an “immersive, interactive and three-day city-wide festival” in Liverpool, which will celebrate fashion, arts and culture “on a scale not seen anywhere else in Europe”. The new format is due to take place from July 7-9 and will form part of the UK’s summer festival calendar, showcasing, fashion, beauty, music, wellbeing, fitness, health, and education in the creative arts, taking over the whole of the ACC Liverpool site as well as iconic city centre buildings including Liverpool Cathedral, St George’s Hall, and the Camp and Furnace in the Baltic Triangle. Fashion Industry Reacts to 'Devastating' Trump Victory. NEW YORK, United States — After a clear yet shocking statement from the American electorate on Tuesday, many are struggling to come to terms with what a Donald Trump victory says about the current political sentiment in the country and what the future leadership of the controversial president-elect might mean for the United States and the world. 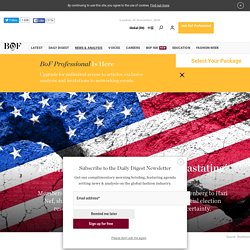 A large turnout in rural America and as well as a strong Republican showing in states Obama took in the last two cycles — Iowa, Florida, Ohio, Pennsylvania and Wisconsin — sealed the win for Trump, who is projected to get over 300 Electoral College votes. Come January, the Republican Party also will control both houses of Congress, which could have major implications for the government’s posture and actions, at home and abroad, where there was no shortage of shock. Alex Bolen, CEO, Oscar de la Renta: "Fashion is an expression of the here-and-now, not yesterday, not tomorrow.

Singles' Day vs Black Friday: Which is the Bigger Opportunity for Fashion? SHANGHAI, China — Chinese e-commerce giant Alibaba expects to log its highest ever number of daily transactions on its two shopping platforms, Tmall and Taobao, this Friday, on what is set to be the biggest ever iteration of its annual shopping festival Singles' Day. 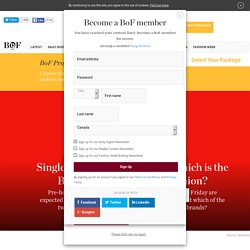 More than 600 million transactions are expected to take place on November 11 as part of the one-day event, during which Alibaba deploys the kind of cut-price discounts that, last year, helped the company drive more than $14 billion in sales — significantly more than the $10 billion generated by the Black Friday shopping event in the United States. This year, Alibaba is upping the ante with a shopping extravaganza that will include an eight-hour fashion show in Shanghai, during which viewers will be able to pre-order items off the catwalk; virtual reality shopping experiences; and a performance from Katy Perry. Black Friday is an occasion that has very low growth now, it’s becoming a bit less popular.

Related Articles: M&S to close 30 UK stores and cut back on clothing. Marks & Spencer is shutting 30 UK stores and converting 45 more into food-only shops as part of a major business overhaul that will slash the amount of shopfloor space devoted to its ailing clothing ranges. 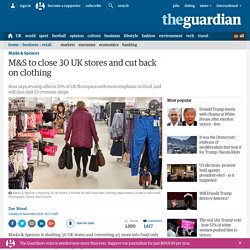 The retailer’s new chief executive, Steve Rowe, said more than 100 UK stores were in the firing line as part of a wider shakeup designed to end a long-running slump in clothing sales and devote more space to its more successful food business. He outlined plans to open 200 new Simply Food outlets. M&S refused to identify which 30 “full-line” stores – which sell clothing, homewares and food – are to close or identify the 45 outlets that will be converted into food stores.