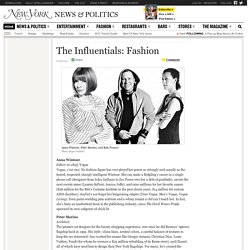 No fashion figure has ever played her power as strongly and cannily as the feared, respected, sharply intelligent Wintour. She can make a fledgling’s career in a single phone call (designers from John Galliano to Zac Posen owe her a debt of gratitude), anoint the next society muse (Lauren duPont, Jessica Joffe), and raise millions for her favorite causes ($26 million for the Met’s Costume Institute in the past eleven years, $14 million for various AIDS charities). And let’s not forget her burgeoning empire (Teen Vogue, Men’s Vogue, Vogue Living).

Even paint-wielding peta activists and a whiny roman à clef can’t touch her. In fact, she’s been an inadvertent boon to the publishing industry, since The Devil Wears Prada spawned its own subgenre of chick lit. Peter MarinoArchitect The premier set designer for the luxury-shopping experience, ever since he did Barneys’ uptown flagship back in 1992. The Impact of Pop Art on the World of Fashion – From Art to Industry and Back. Ever since pop art emerged in the fifties, it has been going hand in hand with the fashion industry. 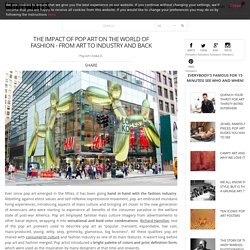 Rebelling against elitist values and self-reflexive expressionist movement, pop art embraced mundane living experiences, introducing aspects of mass culture and bringing art closer to the new generation of Americans who were starting to experience all benefits of the consumer paradise in the welfare state of post-war America. Pop art employed familiar mass culture imagery from advertisements to other banal objects, wrapping it into sensational and bold color combinations. 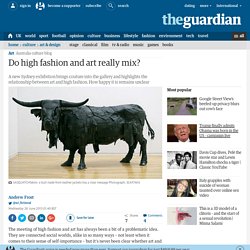 They are connected social worlds, alike in so many ways – not least when it comes to their sense of self-importance – but it's never been clear whether art and fashion really mix. In the exhibition Feel & Think: A New Era in Tokyo Fashion, the organisers and curators go a long way to try to get you to consider that question. The show is collaboration between the Sherman Contemporary Art Foundation and the National Art School and features installation art works by five Tokyo-based fashion brands who go under a bewildering array of upper and lowercase neologisms including ANREALAGE, mintdesigns, SASQUATCHfabrix, THEATRE PRODUCTS and writtenafterwards.

The Sydney iteration of the show, originally curated and staged at the Tokyo Opera City Art Gallery, comes under the imprimatur of Dr. Fashion is like art, argues Sherman, in her introduction to this catalogue. Perhaps I'm overthinking it. Aries: the London label doing female streetwear right. It’s undeniable: once a dirty word in fashion doomed to same the low-brow bargain bin as “sportswear”, streetwear has been accepted – no, gleefully welcomed – into the industry’s open arms. 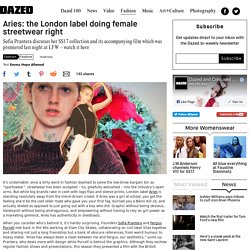 But while big brands rake in cash with logo flips and sleeve prints, London label Aries is standing resolutely away from the trend-driven crowd. If Aries was a girl at school, you get the feeling she’d be the cool older mate who gave you your first fag, burned you a Bikini Kill cd, and actually skated as opposed to just going out with a boy who did. Graphic without being obvious, tomboyish without being androgynous, and empowering without having to rely on girl power as a marketing gimmick, Aries has authenticity in shedloads. When you consider who’s behind it, it’s hardly surprising. “We all felt that we should just start doing it and see how it developed... The best example of this can be found in a graphic t-shirt, bearing the word ARIES in the style of a variety of other famous fashion logos.

Five emerging brands who killed it at New York Fashion Week. This season, the MADE New York crew killed it with their emerging talent showcase. 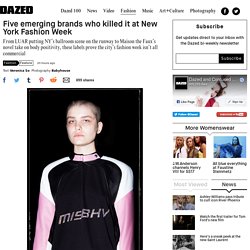 They had no fewer than 22 labels showing at Milk Studios and The Standard, along with a creative partnership with Tumblr Fashion and a shop where you could buy items straight off the SS17 runway. They even found time to host Dev Hynes’ Freetown Sound merch pop-up, with all proceeds getting donated to homeless LGBTQ youth. For some designers, MADE represented an opportunity to make their New York Fashion Week debut, while for others it was something of a comeback and, in the case of one brand, the chance to hold an epic casting call for NYC’s top celebrity lookalikes to model their collection. Here were some of MADE New York’s SS17 highlights. Ottolinger – the Swiss label of designers Christa Bosch and Cosima Gadient – have never been afraid to take a perfectly made item of clothing and destroy it. @ottolinger1000 @misbhv @maisonthefaux @barragannnn @raulzepol.

Related:  Maps and Location Analytics   -  The Most Influential People in Fashion   -  Education   -  Enterprise