The number of transphobic hate crimes reported to the police has nearly trebled in the past five years, according to figures obtained by The Independent – but low prosecution rates are causing a "lack of trust" in police. 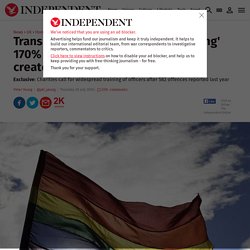 Sexual assaults, other kinds of violence, threatening behaviour and harassment are all part of a 170 per cent rise in crime reports that has caused alarm among transgender people. According to Freedom of Information responses received from 26 of the UK's 45 police forces, transphobic hate crime reports rose from 215 in 2011 to 582 in 2015. But at the same time, the number of prosecutions is falling, with only 19 secured last year and 22 in 2014, according to the 15 forces which supplied this information. Angela Rayner, Labour's Shadow Minister for Women and Equalities, described the figures as "sickening" and said the system was "failing the victims".

There were only 19 prosecutions for transphobic hate crimes last year, despite the huge rise to 582 incidents Reuse content. The 2016 Election: Know the facts about transgender people. Background UCLA's Williams Institute estimates there are 1.4 million transgender people in the United States. 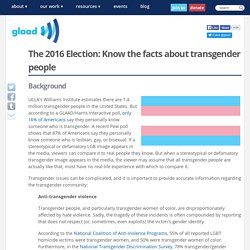 But according to a GLAAD/Harris Interactive poll, only 16% of Americans say they personally know someone who is transgender. A recent Pew poll shows that 87% of Americans say they personally know someone who is lesbian, gay, or bisexual. If a stereotypical or defamatory LGB image appears in the media, viewers can compare it to real people they know. But when a stereotypical or defamatory transgender image appears in the media, the viewer may assume that all transgender people are actually like that; most have no real-life experience with which to compare it. Transgender issues can be complicated, and it is important to provide accurate information regarding the transgender community: Anti-transgender violence Transgender people, and particularly transgender women of color, are disproportionately affected by hate violence. Nondiscrimination and workplace protections Healthcare. British Army's first transgender officer warns 'trans rights in the US will be set back' if Trump wins.

The British Army's first transgender officer has warned if Donald Trump reaches the White House trans rights in the US “will be set back a whole generation.” 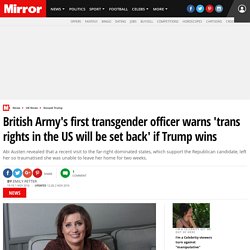 And she reveals a recent visit to the far-right dominated, notoriously anti-trans states, which support the Republican candidate, left her so traumatised she was unable to leave her home for two weeks. Abi Austen, once 16-stone Para Captain Ian Hamilton, began living as a woman ten years ago. She recently visited the swing state of North Carolina for a moving Channel Four documentary, to highlight its introduction of the controversial 'bathroom bill'. The bill, which insists trans-people must use the sex of bathroom which appears on their birth certificate even if they are now living as the opposite gender, has stirred massive opposition from Obama's administration, backed by democrat candidate Hilary Clinton. "I sat down with a so-called bishop and was told I'm a sexual pervert and a paedophile. Read More Donald Trump wins US election. Transgender Bond Girl Caroline Cossey breaks her silence: I hid for 25 years but I'm back holding my head high.

As a Bond girl and a pin-up known to millions as Tula, Caroline Cossey oozed glamour and had a glittering life in front of her. 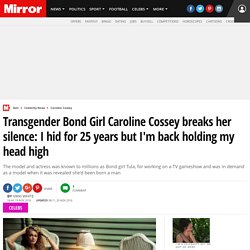 She was working on a TV gameshow and was in international demand as a model. That all changed when an undercover sting callously revealed to the world that she was born a boy. It was the early 1980s and she became the world’s most famous transgender woman – choosing to tell her remarkable story in the Sunday Mirror. But life in Britain was to become too much after she was mocked by cruel sections of the press, attacked by a male fan and pounced on by a “lynch mob” bombarding her with personal questions. 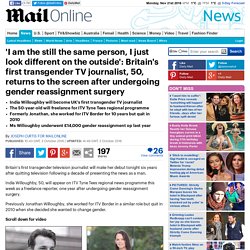 India Willoughby, 50, will appear on ITV Tyne Tees regional news programme this week as a freelance reporter, one year after undergoing gender reassignment surgery. Previously Jonathan Willoughby, she worked for ITV Border in a similar role but quit in 2010 when she decided she wanted to change gender. Scroll down for video India Willoughby (right), formerly Jonathan (left), will become Britain's first transgender television journalist on ITV Tyne Tees Ms Willoughby underwent a £14,000 gender reassignment surgery in Brighton last year (pictured) She said: 'ITV have been fantastic, it hasn't been weird or awkward and they have just welcomed me back. 'I didn't feel nervous at all when I walked back through the door again, they made me feel like I was home.