Dolce & Gabbana’s Local Retail Revolution. MILAN, Italy — Dolce & Gabbana is to embark on a global overhaul of its directly operated retail network, starting with the opening of a new experience space in Milan on September 24th. 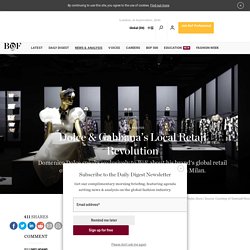 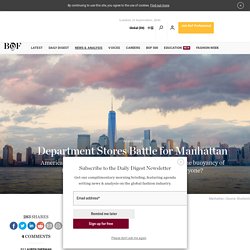 In February 2016, Barneys New York opened its 58,000-square-foot Chelsea flagship in the hopes of wooing the city’s tech elite working just blocks away at companies like Google and IAC/InterActiveCorp. Rosie Nelson (Episode 1 of 4) Fashion industry told to end its quest for ‘unattainable thinness’ The Women’s Equality party is to launch an unprecedented campaign aimed at radically changing the way the fashion industry treats body size and shape. 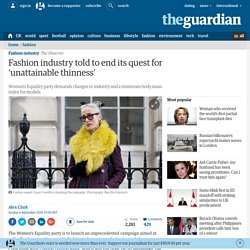 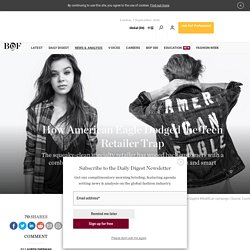 Nicholas Oakwell AW16 Couture Collection viewed on a private catwalk. From Tom Ford to Yeezy, catch up on the #NYFW shows so far. Suits you! how today’s design talents are crafting the tailoring of tomorrow. A Brief History of Chanel No. 5. Folklore decrees that somewhere in the world, each and every minute, of each and every day, a bottle of Chanel No. 5, is bought. 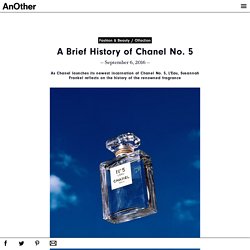 It remains at the top of the international best-selling fragrance lists almost a century since its creation by Ernest Beaux, perfumer to the Russian court, introduced to Gabrielle Chanel by her then lover, the Grand Duke Dmitri Romanov, who escaped revolutionary Russia with the chemist to settle in Biarritz in 1920. Get To Know the New Michael Kors Campaign Faces. Four It girls. 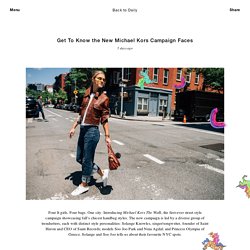 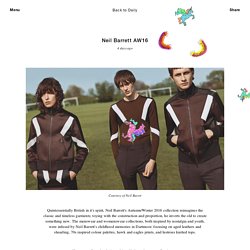 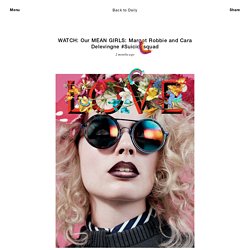 Our Cover star Margot is interviewed for LOVE16 by her Suicide Squad cast mate Cara Delevingne (in a hairdressers) . Sporting polka dot bows in their hair, and dancing to Sign of The Times by Belle Stars, LOVE's Editor in Chief says of the shoot "The first concert I ever went to was The Belle Stars. I remember my outfit vividly: white off-the-shoulder cut-off sweatshirt from Way In at Harrods, pale pink pleated skirt with dark pink stripes from Dorothy Perkins and white flat pointed winkle-picker shoes with a dark and pale pink heel and matching bow detail from Birmingham Market. 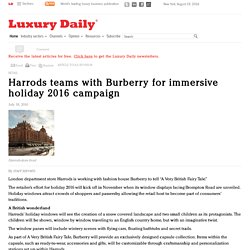 The retailer’s effort for holiday 2016 will kick off in November when its window displays facing Brompton Road are unveiled. Holiday windows attract crowds of shoppers and passersby, allowing the retail host to become part of consumers' traditions. C E R E A L (@cerealmag) Luxury brands must redefine the way they do business. There were times when China was the holy grail for global retailers. 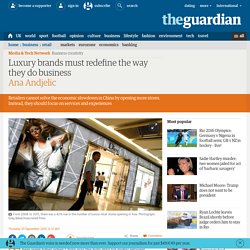 Logo-obsessed Chinese buyers seeking opulence were armed with cash fresh from the economic boom. Luxury retail brands flocked to the new market, with the result of 35% of sales for brands such as Omega, Harry Winston and Balmain coming from Greater China, according to estimates by Exane BNP Paribas. The region is responsible for a whooping 25% of sales at Burberry and 20% of sales at Prada. The strategy of growth by opening stores in emerging and existing markets is neither new nor unique to luxury retail. It is a reflection of the modus operandi of the industrial age, where scaling growth is linked to incessant production. The logic of this is that if consumers aren’t buying your stuff, create more stuff. From 2008 to 2011, there was a 42% spike in the number of luxury retail stores in Asia, compared with a 28% rise in Europe and 5% rise in North America, according to Lux Redux report by Boston Consulting Group.

Veuillez aller à. Fashion house Balmain sold to Qatar's Mayhoola sovereign wealth fund. The Qatari investment fund that owns the Italian Valentino label will take over the French fashion house Balmain, which has become a favourite of film stars, the adviser for the acquisition has announced. “After completing this transaction Mayhoola for Investments will hold 100% of Balmain’s capital,” said the merger and acquisitions company Bucephale Finance.

Why Nascent Luxury Brands Need Middlemen. The Kiko Kostadinov space at Dover Street Market in London | Source: Dover Street Market LONDON, United Kingdom — Direct-to-consumer e-commerce pioneers like Warby Parker and Everlane pride themselves on bypassing the middlemen who operate third-party retail distributors. In the telling of their success stories, these middlemen are often painted as meddling intermediaries, taking an unreasonably high margin that serves neither brand nor consumer. But despite the undeniable achievements of companies like Warby Parker and Everlane, there is definite value in the presence of middlemen. As argued recently by Richie Siegel, third-party retail distributors can offer clear business benefits by taking on the task of merchandising and selling product, enabling brands to focus on design. But when it comes to the luxury fashion market, middlemen also play a more fundamental role that is essential to the earliest stages of luxury brand building.

Your first look at Gigi Hadid’s line for Tommy Hilfiger. Luxury Institute's Seven Trends Shaping Luxury in 2015. NEW YORK, NY--(Marketwired - Nov 11, 2014) - The following is a White paper by Milton Pedraza, CEO of Luxury Institute, LLC: All around the globe, the luxury industry has navigated against strong headwinds in 2014.