All Saints Brand Analysis – kljackmandigitalpublishing. “AllSaints stands for being a brand leader; our mission is to create a brand that blends cultural, fashion and music into a potent formula of desirable clothing that expresses individuality and attitude.” 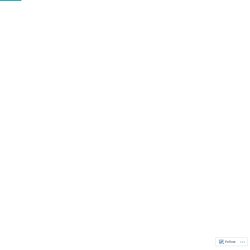 (AllSaints Website, 2013) HistoryAllSaints was established in 1994 by Stuart Trever and Kait Bolongaro. The brand was named after All Saints Road, which was the forefront of up-and-coming music and design talent. Originally AllSaints started out as a menswear brand exclusive to high-end retails such as Harrods and Harvey Nichols. The Business of Fashion. Established in 1994, AllSaints is a British fashion house creating clothing and accessories for men and women. 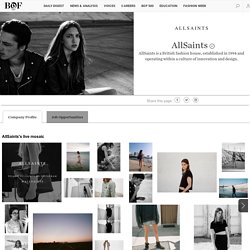 AllSaints operates within a culture of innovation and design with an independent spirit, from its East London atelier to the in-house design and construction of AllSaints' digital and physical stores. The brand is best known for its premium leather, most notably its iconic biker jackets. AllSaints expresses attitude and individuality through its deep-rooted links to music, and its film division - AllSaints Studios. AllSaints collections are available for purchase from locations in 10 countries worldwide through more than 120 directly operated stores, and ships to over 200 countries via AllSaints' e-commerce sites.

How I got here: William Kim, chief executive of AllSaints. Kim has driven growth in the core UK, US and Asian and Asian markets, while expanding the brand’s global awareness by venturing into new territories, such as Canada, the Netherlands, Germany and France. 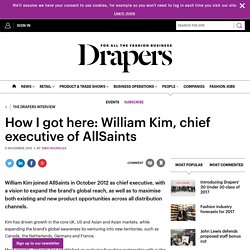 Most recently, AllSaints has established an exclusive franchise partnership with in the Middle East with Majid Al Futtaim, and opened its first store at the Mall of the Emirates in Dubai in September 2015, with stores scheduled to follow across five countries in the Middle East. Under Kim’s leadership, AllSaints has internally developed and launched a responsive AllSaints.com, in addition to several innovative digital projects, which have enabled the brand to further enhance customer engagement. AllSaints also expanded its product offering with its first bag range, the Capital Collection, for autumn 15 and a range of women’s footwear is planned for spring 16. London Fashion Review - British Fashion Designers, Labels and Brands. View the latest All Saints Fashion collections Since its humble beginnings in 1994 as a wholesale menswear brand, All Saints has gone from strength to strength. 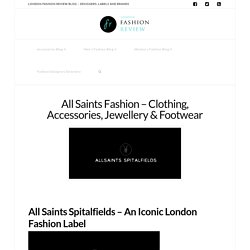 As at the start of 2011, the brand currently boasts 63 stand-alone stores and 47 concessions in many worldwide locations, selling menswear, womenswear, childrenswear, accessories and even homeware. However, it has not been all smooth sailing for the All Saints brand name.