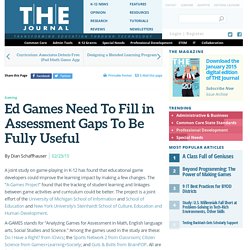 The "A-Games Project" found that the tracking of student learning and linkages between game activities and curriculum could be better. The project is a joint effort of the University of Michigan School of Information and School of Education and New York University's Steinhardt School of Culture, Education and Human Development. A-GAMES stands for "Analyzing Games for Assessment in Math, English language arts, Social Studies and Science. " "We looked at how various features support educators in knowing what students know," said Barry Fishman, a U Michigan professor in both the schools of information and education. The latest study was based on observations and interviews with 30 middle schools teachers (grades 5-8) in public and private schools in New York.

Exploring the Educational Potential of Video Game-Based Learning: A Few Moments with Kurt Squire. When Kurt Squire first began studying video games, learning and cognition from a socio-cultural perspective in the late '90s, the field was still in its infancy. 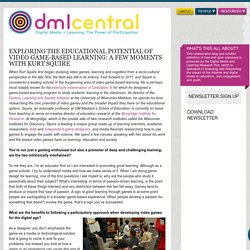 Fast forward to 2011, and Squire is considered a leading scholar in the burgeoning area of video game-based learning. He is perhaps most notably known for his extensive examination of Civilization III for which he designed a game-based learning program to study students’ learning in the classroom. As director of the Games, Learning and Society Initiative at the University of Wisconsin-Madison, he spends his time researching the civic potential of video games and the broader impact they have on the educational sphere.

Squire, an associate professor at UW-Madison’s School of Education, is currently on leave from teaching to serve as creative director of education research at the Morgridge Institute for Research. To me they are. So then, how do you begin to design good, comprehensive games for education? Video Games For Grown-ups. The office of Funomena, a small video-game company based in San Francisco's SOMA district, has all the creativity-enhancing knickknacks you expect in a Bay Area startup: clumps of clay, hydrophilic sand, a Lego mermaid, and what cofounder Robin Hunicke describes as other "stupid things we fiddle with. 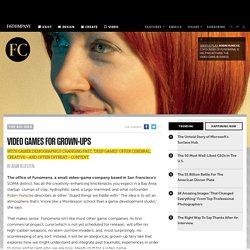 " The idea is to set an atmosphere that's "more like a Montessori school than a game development studio," she says. That makes sense: Funomena isn't like most other game companies. Its first commercial ­project, Luna (which is not yet scheduled for release), will offer no high-caliber weapons, no alien-zombie invaders, and, most surprisingly, no scorekeeping of any sort.

Instead, it will be an allegorical, grown-up fairy tale that explores how we might understand and integrate past traumatic experiences in order to grow and accept who we are now. Deep gaming is also a response to a fast-changing marketplace that no longer represents just one narrow slice of the population. Translational Psychiatry - The neural basis of video gaming.

Epic Fail or Win? Gamifying Learning in My Classroom. Every week for 17 years, I've heard my students ask, "What do I need to do to get an A? 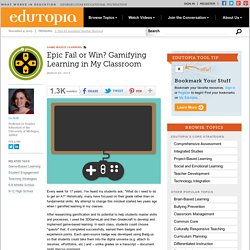 " Historically, many have focused on their grade rather than on fundamental skills. My attempt to change this mindset started two years ago when I gamified learning in my classes. After researching gamification and its potential to help students master skills and processes, I used the 3DGameLab and then Gradecraft to develop and implement game-based learning. In each class, students could choose "quests" that, if completed successfully, earned them badges and experience points. Each open-source badge was developed using Badg.us so that students could take them into the digital universe (e.g. attach to resumes, ePortfolios, etc.) and -- unlike grades on a transcript -- document skills they've mastered. Steps to Gamify Learning 1. Using gamification software alleviates the time it takes to build quests, award points, and track progress. 2. 3. 4. Build choice into the gaming structure. 5. 6. 7. 8. 9.