Space Exploration, Space Exploration Information, Facts, News, Photos. Speaking part 2 topic- to think about and practice. Speaking p3. Director James Cameron Works with NASA on Future Mars Mission. The maker of legendary movies "Titanic," "Aliens" and "The Terminator" is no longer limiting his zest for extracurricular exploration to the depths of the ocean. 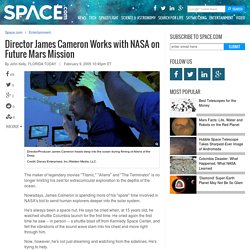 Nowadays, James Cameron is spending more of his "spare" time involved in NASA's bid to send human explorers deeper into the solar system. He's always been a space nut. He says he cried when, at 15 years old, he watched shuttle Columbia launch for the first time. He cried again the first time he saw -- in person -- a shuttle blast off from Kennedy Space Center, and felt the vibrations of the sound wave slam into his chest and move right through him. Now, however, he's not just dreaming and watching from the sidelines. Peter Diamandis: Our next giant leap.