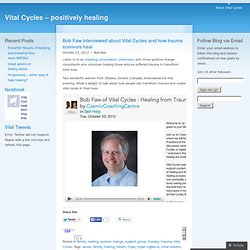 Would you like to: sleep better? A Child Abuse Survivors Group Discussion: Healing and Hypervigilance. I've been doing a lot of work on eradicating the false beliefs about myself that I developed in my childhood. 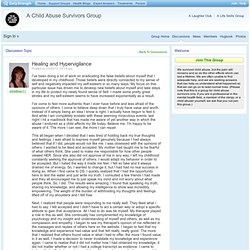 Those beliefs were directly connected to my sense of self and negatively impacted my self-esteem in so many ways. My focus on this particular issue has driven me to develop new beliefs about myself and take steps in my life to protect my newly found sense of Self. I made some pretty great strides and my self-esteem seems to have increased exponentially as a result. Into the Light: sexual abuse – support info and resources. Escaping The Tight Grasp of Hypervigilance ‘Every breath you take …Every move you make… I’ll be watching You’Published in “Interact” The Journal of the Trauma and Abuse Group September 2010 “You’ve taken down the Easter cards!”

My client looked frightened and angry. Easter had passed weeks before and the dust had started to gather on the fading chicks by mid May. “Everything is coming to an end” she sighed and added “Its all shutting down.” She was partly correct – our sessions were drawing to a close but I hadn’t realized the small visual change would cause her so much distress. Yet knowing her as I did I shouldn’t have been surprised. Dan Allender suggests in his book “The Wounded Heart” that when children have experienced trauma and especially sexual abuse as children this will produce hypervigilant behaviour as adults. Certainly the day after the London bombings in July 2005 when I nervously got back on the tube I was on full alert. What are they really thinking about us? What is PTSD Hypervigilance or Hyper Alertness? What is PTSD Hypervigilance or Hyper Alertness? 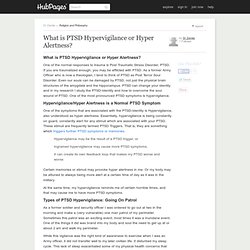 One of the normal responses to trauma is Post Traumatic Stress Disorder, PTSD. If you are traumatized enough, you may be afflicted with PTSD. As a former Army Officer who is now a theologian, I tend to think of PTSD as Post Terror Soul Disorder. Even our souls can be damaged by PTSD, not just the physical brain structures of the amygdala and the hippocampus. How Does Hyper Vigilance Effect You? HYPERVIGILANCE. By Kevin M. 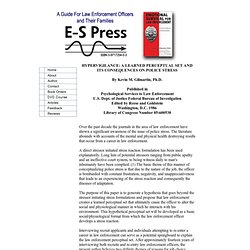 Gilmartin, Ph.D. Published in Psychological Services to Law Enforcement U.S. Dept. of Justice Federal Bureau of Investigation Edited by Reese and Goldstein Washington, D.C. 1986 Library of Congress Number 85-600538 Over the past decade the journals in the area of law enforcement have shown a significant awareness of the issue of police stress. The literature abounds with accounts of the mental and physical health destroying results that occur from a career in law enforcement.

A direct stressor initiated stress reaction formulation has been used explanatorily. The purpose of this paper is to generate a hypothesis that goes beyond the stressor initiating stress formulations and propose that law enforcement creates a learned perceptual set that ultimately cause the officer to alter the social and physiological manner in which he interacts with his environment.

The majority of the literature on police stress speaks of the ill effects of this reaction. Hypervigilance after Child Abuse « Blooming Lotus. April 14, 2008 by faithallen Hypervigilance is one of the aftereffects of child abuse that drives me the nuttiest. 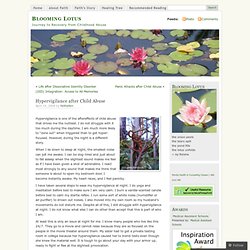 I do not struggle with it too much during the daytime. I am much more likely to “zone out” when triggered than to get hyper-focused. However, during the night is a different story. When I lie down to sleep at night, the smallest noise can jolt me awake. How Hypervigilance Develops. Hypervigilance Symptoms - general Psychology. Hypervigilance symptoms are easily identifiable, and they are actually the manifestations of what is known as post traumatic stress disorder (PTSD).

So as I was saying, hypervigilance symptoms are one of the manifestations of the disorder known as post traumatic stress disorder (PTSD). This condition can be regarded as an anxiety disorder, that is usually triggered by some traumatic event which is responsible for causing fear or horror of an intense degree.

The symptoms of this condition can be dealt with inculcating healthy coping methods, and following what the doctor suggests. However, for some people, they may stay for as long as several months or even years. There are high chances of PTSD to become a long-lasting condition. What is Hypervigilance? The term 'hyper', when used in conjunction with something, it specifies an increase in the intensity of the nature of that particular thing. 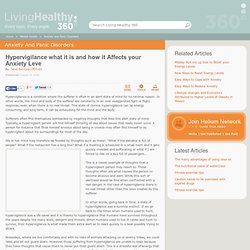 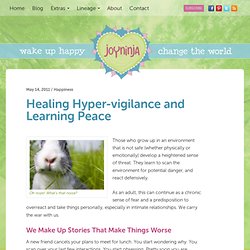 What's that noise? Those who grow up in an environment that is not safe (whether physically or emotionally) develop a heightened sense of threat. They learn to scan the environment for potential danger, and react defensively. As an adult, this can continue as a chronic sense of fear and a predisposition to overreact and take things personally, especially in intimate relationships. We carry the war with us. We Make Up Stories That Make Things Worse A new friend cancels your plans to meet for lunch.