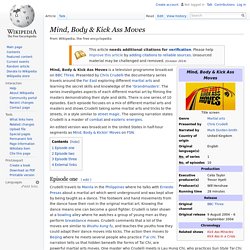 Episode one[edit] Episode two[edit] The episode opens with Crudelli giving a female cab driver some self-defence tips, such as how to disarm somebody who had pulled a knife on her. Next we see Tanaka and his daughter Midori. While she shoots arrows at him he slices through them with his sword. He even fights on opponent while carrying on a conversation with Crudelli, not even looking in his opponents direction. Episode three[edit] External links[edit] Mind, Body & Kick Ass Moves at the Internet Movie Database.

The sea, the sea 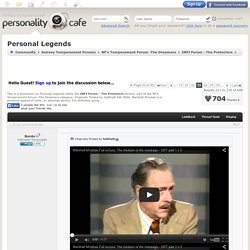 Haha - Edit, holy wow you might have to read this in pieces), but I just watched the Anita Sarkeesian bit of that video and I'm gonna start with that while it's fresh. It's interesting because I've had women's lib and rape on the brain for the last few days. I argued in favor of rape jokes on Family Guy (I do agree, however, that they tend to be especially insensitive) on another thread (yes, the writers should be allowed to make them), and I've been thinking a lot about what I wrote.

I consider myself a feminist, but I also kind of...get misogyny. I definitely don't condone it, but I understand it to an extent. "Climb mountains not so the world can see you, but so you can see the world""For what it's worth: It' never too late or, in my case, too early to be whoever you want to be. Your Friday Dose of Woo: Activate your DNA! There are times when the struggle to keep cranking out Your Friday Dose of Woo every week starts to get to me. 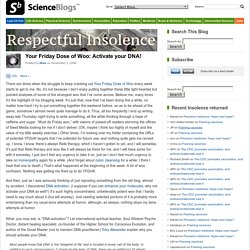 No, it’s not because I don’t enjoy putting together these little light-hearted but pointed analyses of some of the strangest woo that I’ve come across. Believe me, many times it’s the highlight of my blogging week. It’s just that, now that I’ve been doing this a while, no matter how hard I try to put something together the weekend before, so as to be ahead of the game, somehow I almost never quite manage to do it. Thus, all too frequently I end up writing away late Thursday night trying to write something, all the while thinking through a haze of caffeine and sugar: “Must do Friday woo,” with visions of pissed-off readers storming the offices of Seed Media looking for me if I don’t deliver. (OK, maybe I think too highly of myself and the value of my little weekly exercise.) Most people know that DNA is the ‘blueprint of life’ and is located in every cell of the body. 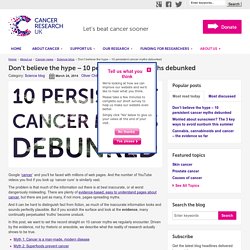 And the number of YouTube videos you find if you look up ‘cancer cure’ is similarly vast. The problem is that much of the information out there is at best inaccurate, or at worst dangerously misleading. There are plenty of evidence-based, easy to understand pages about cancer, but there are just as many, if not more, pages spreading myths. And it can be hard to distinguish fact from fiction, as much of the inaccurate information looks and sounds perfectly plausible. But if you scratch the surface and look at the evidence, many continually perpetuated ‘truths’ become unstuck. In this post, we want to set the record straight on 10 cancer myths we regularly encounter. Myth 1: Cancer is a man-made, modern disease It might be more prominent in the public consciousness now than in times gone by, but cancer isn’t just a ‘modern’, man-made disease of Western society.