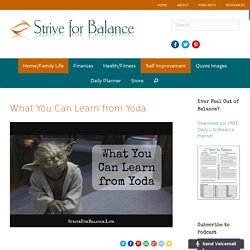 I think he is beyond adorable and wise! My son informed me that May 4th is International Star Wars Day. I asked him, “Is that really a day?” So in honor of Star Wars Day and my favorite little green guy Yoda, I’d like to share with you some amazing wisdom of Yoda. Self-Control “Control, control, you must learn control!” Fear “Fear is the path to the dark side. Introductory plant biology video lecture series. Have you been looking for high-quality, university-level introductory plant biology videos? 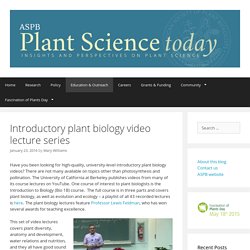 There are not many available on topics other than photosynthesis and pollination. The University of California at Berkeley publishes videos from many of its course lectures on YouTube. One course of interest to plant biologists is the Introduction to Biology (Bio 1B) course. The full course is in three parts and covers plant biology, as well as evolution and ecology – a playlist of all 43 recorded lectures is here. The plant biology lectures feature Professor Lewis Feldman, who has won several awards for teaching excellence. This set of video lectures covers plant diversity, anatomy and development, water relations and nutrition, and they all have good sound and image quality. Here are the 14 videos from the plant biology section: Do you know of other good-quality plant biology teaching videos? Stephen Hawking’s Reith Lecture: Annotated transcript. Image copyright Richard Ansett With appearances on comedy shows, books in the best-seller lists and the unforgettable image of a brilliant mind in an ailing body, Stephen Hawking has earned the title of the world's most famous scientist. 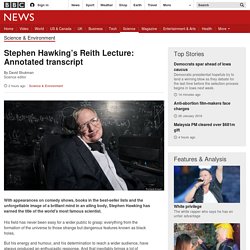 His field has never been easy for a wider public to grasp: everything from the formation of the universe to those strange but dangerous features known as black holes. But his energy and humour, and his determination to reach a wider audience, have always produced an enthusiastic response. And that inevitably brings a lot of questions that people might find embarrassing to ask in public. So, as a guide for the interested but perplexed, I have added a few notes (in italics below) to the transcript of the first of Stephen Hawking's BBC Reith Lectures. You can listen to the lecture live on BBC Radio 4 from 0900 GMT.

Transcript of Stephen Hawking's first Reith Lecture My talk is on black holes. Image copyright Science Photo Library. Earth - A pair of cave lion cubs has been found mummified. After thousands of years trapped beneath the ice, their young faces are still covered in fur. 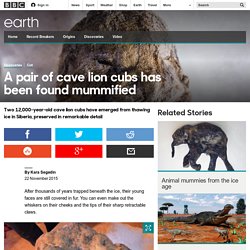 You can even make out the whiskers on their cheeks and the tips of their sharp retractable claws. Named for the Siberian riverbank where they were found, Uyan and Dina are the most complete cave lion remains ever discovered. They could prove key to learning more about a species that became extinct over 12,000 years ago. Over the summer of 2015, flooding along the Uyandina River exposed the ice lens where the cubs were buried.

By a stroke of luck, a team of contractors was in the area collecting mammoth tusks. Knowing they had uncovered the remains of a feline predator, Androsov immediately placed the cubs in a glacier to prevent thawing. Successful elimination of a lethal wildlife infectious disease in nature. Abstract Methods to mitigate the impacts of emerging infectious diseases affecting wildlife are urgently needed to combat loss of biodiversity. 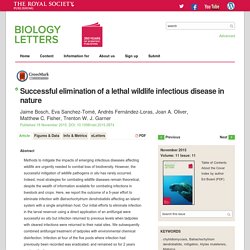 However, the successful mitigation of wildlife pathogens in situ has rarely occurred. Indeed, most strategies for combating wildlife diseases remain theoretical, despite the wealth of information available for combating infections in livestock and crops. Here, we report the outcome of a 5-year effort to eliminate infection with Batrachochytrium dendrobatidis affecting an island system with a single amphibian host. Our initial efforts to eliminate infection in the larval reservoir using a direct application of an antifungal were successful ex situ but infection returned to previous levels when tadpoles with cleared infections were returned to their natal sites. 1.

Emerging infections are on the increase, incurring extraordinary economic and health costs and globally degrading our natural capital. Anthropocene. Magic 'metamaterials' storm physics. 4 March 2015Last updated at 08:22 ET By Jonathan Webb Science reporter, BBC News, San Antonio One material on display was a rubber slab with programmable stiffness Physicists are abuzz with possibilities for "metamaterials" that can be designed to have surprising properties. 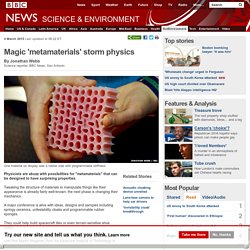 Tweaking the structure of materials to manipulate things like their appearance is already fairly well-known; the next phase is changing their mechanics. A major conference is alive with ideas, designs and samples including springy ceramics, unfeelability cloaks and programmable rubber sponges. They could help build spacecraft tiles or even terrain-sensitive shoe soles. "I think this idea of metamaterials is slowly migrating into different areas," said Prof Martin Wegener, from the Karlsruhe Institute of Technology in Germany. "Originally the excitement was all about electromagnetism - and then it went to totally different areas like thermodynamics and, lately, mechanics. "