Rio 2016: Athletes warned to keep mouths closed when swimming in faeces-infested water. Athletes competing in the 2016 Olympic Games in Brazil have been warned by doctors, engineers, and scientists to keep their mouths shut while participating in activities in the water. 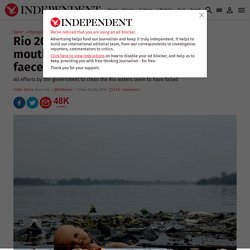 Researchers found that many of the beaches in Rio de Janeiro have been long contaminated with raw sewage, household garbage, and even dead bodies, creating hazardous swimming conditions for the 500,000 people expected to descend on the city in August. “Foreign athletes will literally be swimming in human crap, and they risk getting sick from all those microorganisms,” Rio paediatrician Dr Daniel Becker told the New York Times.

“It’s sad but also worrisome.” The Brazilian government had promised to clean the pathogen-infested Guanabara Bay in 2014, but those efforts failed. Health in Brazil. For an ambulance in Brazil, call 192, or an emergency number. 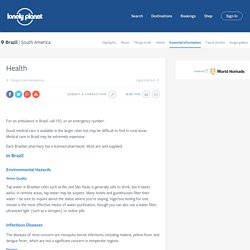 Good medical care is available in the larger cities but may be difficult to find in rural areas. Medical care in Brazil may be extremely expensive. Each Brazilian pharmacy has a licensed pharmacist. Most are well supplied. Zika Epidemic Offers Sanitation a Chance in Brazil. Active Citizens, Civil Society, Development & Aid, Editors' Choice, Environment, Featured, Headlines, Health, Population, Poverty & SDGs, TerraViva United Nations, Water & Sanitation Sewage runs down one of the main streets of Altamira, a city in the Amazon rainforest in northern Brazil. 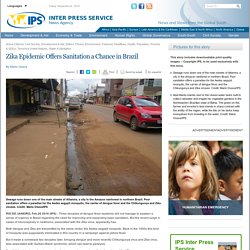 Poor sanitation offers a paradise for the Aedes aegypti mosquito, the carrier of dengue fever and the Chikungunya and Zika viruses. The Troubling State of Sanitation in Rio. In a city full of beautiful distractions—nature, people, music—it is often easy to forget what is going on beneath your feet. 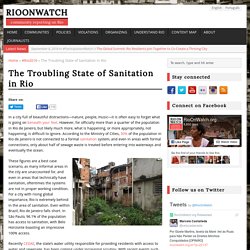 However, for officially more than a quarter of the population in Rio de Janeiro, but likely much more, what is happening, or more appropriately, not happening, is difficult to ignore. According to the Ministry of Cities, 30% of the population in Rio de Janeiro is not connected to a formal sanitation system, and even in areas with formal connections, only about half of sewage waste is treated before entering into waterways and eventually the ocean. These figures are a best case scenario, as many informal areas in the city are unaccounted for, and even in areas that technically have sanitation, oftentimes the systems are not in proper working condition. 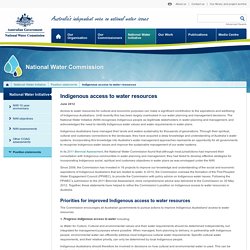 Until recently this has been largely overlooked in our water planning and management decisions. The National Water Initiative (NWI) recognises Indigenous people as legitimate stakeholders in water planning and management, and acknowledges the need to identify Indigenous water values and water requirements in water plans. Clean water would save millions of lives. Thursday March 22, 2012 Red Cross is aiming to improve water, sanitation and hygiene outcomes for 15 million people by 2015. 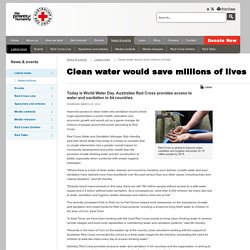 Improved access to clean water and sanitation would unlock huge opportunities in public health, education and economic growth and would act as a game changer for millions of people around the world, according to Red Cross. Red Cross Water and Sanitation Manager, Bob Handby, said with World Water Day today it is timely to consider that no single intervention has a greater overall impact on community development and public health than the provision of safe drinking water and the construction of toilets, especially when combined with simple hygiene messages.