What Role Does Technology Play in Record Levels of Income Inequality? The signs of the gap—really, a chasm—between the poor and the super-rich are hard to miss in Silicon Valley. 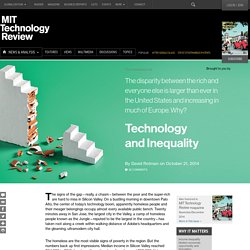 On a bustling morning in downtown Palo Alto, the center of today’s technology boom, apparently homeless people and their meager belongings occupy almost every available public bench. Twenty minutes away in San Jose, the largest city in the Valley, a camp of homeless people known as the Jungle—reputed to be the largest in the country—has taken root along a creek within walking distance of Adobe’s headquarters and the gleaming, ultramodern city hall. 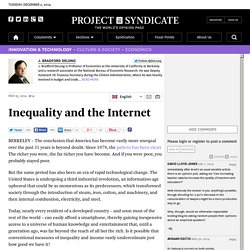 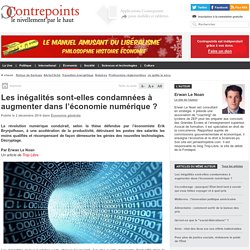 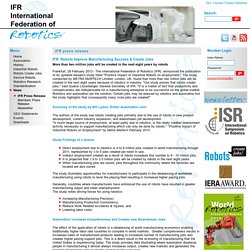 " The study, conducted by METRA MARTECH Limited, London, UK, found that more than two million jobs will be created in the next eight years because of robotics in industry. "Our study proves that robots create jobs," said Gudrun Litzenberger, General Secretary of IFR. "It is a matter of fact that productivity and competiveness are indispensable for a manufacturing enterprise to be successful on the global market. Robots, China and demographics. Understanding Society: Marx's thinking about technology. It sometimes seems as though there isn't much new to say about Marx and his theories. 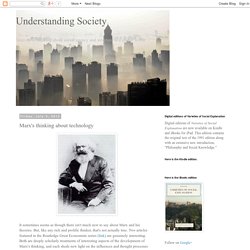 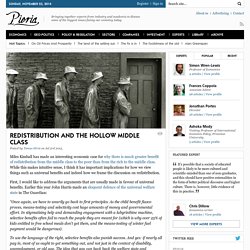 While this makes intuitive sense, I think it has important implications for how we view things such as universal benefits and indeed how we frame the discussion on redistribution. First, I would like to address the arguments that are usually made in favour of universal benefits. Earlier this year John Harris made an eloquent defence of the universal welfare state in The Guardian: “Once again, we have to wearily go back to first principles. As the child benefit fiasco proves, means-testing and selectivity cost huge amounts of money and governmental effort. Basic income vs capitalism. On the one hand, the merits of a guaranteed income for all seem clear: - It would be simple to administer, which should appeal to governments wanting to cut "wasteful" public spending. - In giving an unconditional income to all, workers would be able to take on insecure jobs, training, internships or zero-hours jobs without fear of losing their benefits. 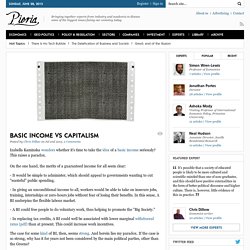 In this sense, A BI underpins the flexible labour market. The changing nature of work. Frances Coppola explores how increasing automation is fundamentally shifting the nature of work away from 'making stuff' towards personal services. 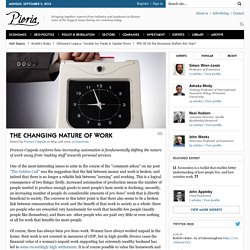 One of the most interesting issues to arise in the course of the "comment-athon" on my post "The Golden Calf" was the suggestion that the link between money and work is broken, and indeed that there is no longer a reliable link between "earning" and working. This is a logical consequence of two things: firstly, increased automation of production means the number of people needed to produce enough goods to meet people's basic needs is declining; secondly, an increasing number of people do considerable amounts of pro bono" work that is directly beneficial to society. 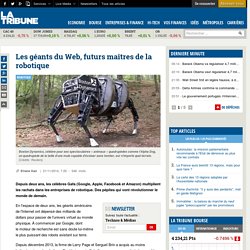 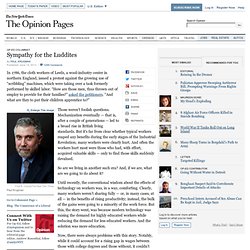 Mechanization eventually — that is, after a couple of generations — led to a broad rise in British living standards. In Praise of Idleness By Bertrand Russell. Like most of my generation, I was brought up on the saying: 'Satan finds some mischief for idle hands to do.' Being a highly virtuous child, I believed all that I was told, and acquired a conscience which has kept me working hard down to the present moment. But although my conscience has controlled my actions, my opinions have undergone a revolution.

I think that there is far too much work done in the world, that immense harm is caused by the belief that work is virtuous, and that what needs to be preached in modern industrial countries is quite different from what always has been preached. Everyone knows the story of the traveler in Naples who saw twelve beggars lying in the sun (it was before the days of Mussolini), and offered a lira to the laziest of them.

Bifurcation in the labour market. First posted at Coppola Comment on 12th February 2013. Reports on the UK jobs market are surprisingly upbeat. The FT, reporting on the North of England and the Midlands, noted that jobs were being created at quite a rate (paywall). The ONS confirmed this in its Regional Labour market statistics for 23rd January. Maslow's hierarchy of needs. Maslow's hierarchy of needs, represented as a pyramid with the more basic needs at the bottom[1] Maslow's hierarchy of needs is a theory in psychology proposed by Abraham Maslow in his 1943 paper "A Theory of Human Motivation" in Psychological Review.[2] Maslow subsequently extended the idea to include his observations of humans' innate curiosity.

His theories parallel many other theories of human developmental psychology, some of which focus on describing the stages of growth in humans. The wastefulness of automation. Chris Dillow observes that "one function of the welfare state is to ensure that capital gets a big supply of labour, by making eligibity for unemployment benefit conditional upon seeking work. " And despite noting that when jobs are scarce, paying some to "lie fallow" so others can work might be a good thing, he concludes that "this is certainly not in the interests of capitalists, who want a large labour supply - a desire which is buttressed by the morality of reciprocal altruism and the work ethic.

" Larry Summers gets it wrong on Piketty and Robots. First of all I think Larry Summers gets much right, especially with respect to how many people are unemployed and have been displaced by a multiple of factors, of which robotics is one of them, albeit not a major factor (yet). I’m not quite sure why Summers mentions disability insurance – would be grateful if he would clarify that. He also considers that robotics will have a major impact on future employment and indicates that Thomas Piketty does not emphasize the threat of robotics and associated technologies enough. Here’s what Summers writes: Robots may take your job but it could lead to a more humane society. Many in the Artificial Intelligence and robotics professions clearly state that their work is toward what has come to be called “weak A.I.” — which is focused more on building tools for helping humans in their work rather than on replacing them.

This is clearly the claim of robot manufacturers such as Rethink Robotics and Universal Robots. However weak A.I., or its associated technology, machine learning is becoming an integral component of automation – and it is this automation, something that previously may have been called Business Process Automation, that may explain the high rate of joblessness in many advanced countries some four years into the recovery from recession. One of the key questions being asked by senior economists and others: “Is the threat of automation and robotics on employment the most pressing social issue?” Despite many highlighting the gloom few have spoken of the benefits and offered up good solutions, until now. Who owns the robots? Chapter 1: Unemployment Today—Robots Will Steal Your Job But That's OK. Machines Will Outsmart Humans. We Better Be Ready. Today, large streams of data, coupled with statistical analysis and sophisticated algorithms, are rapidly gaining importance in almost every field of science, politics, journalism, and much more.

Amazon to begin testing same-day delivery drones in Cambridge. BBC News - Could a big data-crunching machine be your boss one day? One-third of jobs in the UK at risk from automation - News Release. 10 November 2014. R is for "robot": interview with Tom Bonkenburg. Material Handling November 10, 2014. 2010-06_SRA_A4_low.pdf. Futurium. Advances in robotics, artificial intelligence, machine learning and natural user interfaces will have wide repercussions for society and economy in the coming 20-30 years. Future robotic systems, for instance, will operate autonomously alongside humans and assist them in complex manufacturing tasks. Jason Kottke: How does a computer program compare to the Web's best link blogger?

Commentary: Robots are not here to take your jobs. Will robots replace millions of human workers? MONTAUD Andre pro on Twitter: "Latest economics research on effects of automation on labour market and wage polarization: @robotenomics" Human-computer symbiosis, not Artificial Intelligence, will spur new jobs. Robots will augment jobs, not take them.