Spiral skyscraper replaces stairs with two rising intertwined ramps. The levels of a building are traditionally stacked upon one another with stairs or elevators used as a means of moving between them. 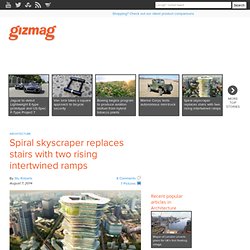 A new design by Sure Architecture, however, takes a different approach. The Endless City in Height instead features two low gradient ramps that spiral upwards. View all The Endless City in Height concept aims to show how buildings need not necessarily use traditional compartmental levels. Modernizing the mashrabiya: Smart-skinned Al Bahar Towers near completion. Glass-skinned steel-frame skyscrapers have many advantages. 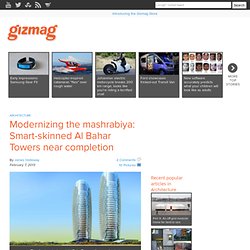 They're relatively quick, inexpensive and easy to build and require comparatively few materials. But they pose problems; heat not least among them. Affordable net zero: foam in, air conditiong out. By prioritizing energy minimization, and taking a pragmatic approach to materials and insulation, client Dr. 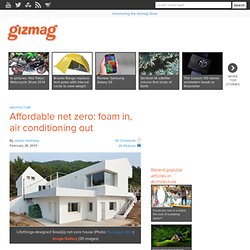 Umbrella facade designed for Shanghai complex. The new screen will feature steel umbrellas that can be individually opened and closed and used to manage light levels within the complex (Image: 3Gatti) Image Gallery (9 images) Architecture studio 3Gatti has taken inspiration from colorful parasols carried during Shanghai’s hot summer months to design a new facade for the 2010 Shanghai Expo’s Madrid Pavilion. 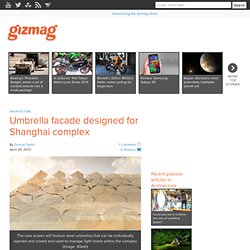 The new screen for the re-purposed office and retail block will feature steel umbrellas that can be individually opened and closed and used to manage interior light levels. View all. Wood poised to scrape the sky. What if we combine the aesthetics and cosiness of wood houses with density of high-rises? 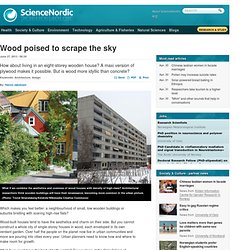 Architectural researchers think wooden buildings will have their renaissance, becoming more common in the urban picture. (Photo: Trond Strandsberg/Kindrob/Wikimedia Creative Commons) Which makes you feel better: a neighbourhood of small, low wooden buildings or suburbs bristling with soaring high-rise flats? Wood-built houses tend to have the aesthetics and charm on their side. But you cannot construct a whole city of single-storey houses in wood, each enveloped in its own verdant garden. Zeoform: The eco-friendly building material of the future? Zeoform promises a recyclable, low carbon-footprint building material that's as strong as ebony Image Gallery (4 images) 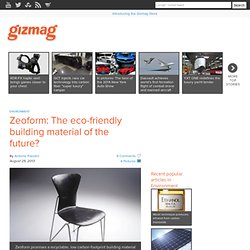 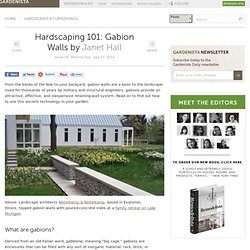 BioSkin defies urban heat island effect to help keep buildings cool. The BioSkin that coats the NBF Osaki Building in Tokyo integrates evaporative cooling to keep its surface temperature down Image Gallery (9 images) The urban heat island effect, whereby the high concentration of heat-retaining concrete and bitumen causes metropolitan centers to be significantly warmer than the rural areas surrounding them, is a common problem around the world. 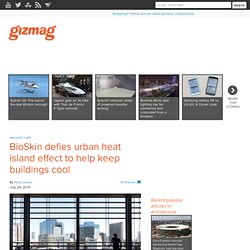 The phenomenon is particularly prevalent in Tokyo, Japan, but among the sea of towering structures stands one beacon of hope. The BioSkin that coats the NBF Osaki Building integrates evaporative cooling to keep its surface temperature down and could inspire new solutions to rising city temperatures across the globe.

View all The 25-story NBF Osaki Building was completed in March, 2011 and is the first structure to use the BioSkin system. How to Build a Dirt Cheap House in 4 Steps. Ever wonder how to build a simple home for very little money, without going into debt? 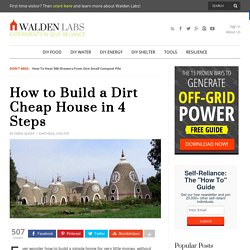 The key is to use low-cost, locally available natural materials such earth, small diameter wood and straw to keep expenses to a minimum. The real fun is incorporating all of these methods into an optimum, comfortable, affordable home. Our earthbag projects have confirmed what I’ve known for a long time – that building at $10/sq.ft. (materials only) or thereabouts is possible. Other aspects of earthbag building — strength, durability, sustainability, etc. — are all important. 8 Amazing Separation Walls. 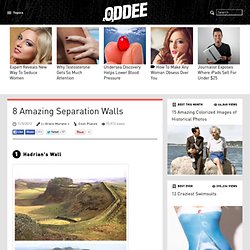 He died on July 10, 138, having been emperor since 117. Stonehenge Begins to Yield Its Secrets. Photo. MX3D gets go-ahead for 3D-printed bridge in Amsterdam. Gizmag has covered a wealth of remarkable architectural projects involving 3D printing – including a backyard castle, a number of small homes and a room with 260 million surfaces – but a project in Amsterdam, Netherlands, is set to be particularly impressive. 3D printing R&D firm MX3D is planning to print a bridge across a canal. It is hoped that the robots used will print their own supports and gradually move across the water, creating the bridge as they go.

The project is a collaboration with, among others, design software company Autodesk and construction firm Heijmans and will incorporate robotics, software engineering, craftsmanship and design. Designer Joris Laarman, who has previously worked with MX3D printing free-standing 3D sculptures, is using Autodesk software to design what is described as "an ornate metal bridge. " "I strongly believe in the future of digital production and local production, in the new craft," says Laarman. World's first 3D-printed office building to go up layer by layer in Dubai. Already home to numerous architectural wonders, including the world's tallest building, Dubai is set to add the world's first 3D-printed office building to its streets.

It will be printed layer by layer by a 3D printer standing 20 ft (6 m) tall, with the layers to be assembled on site to produce a building covering approximately 2,000 sq ft (186 sq m) in a process that is set to take a matter of weeks. The office building, which wouldn't look out of place in a 1970's science fiction show set in the present day, will serve as a temporary headquarters for staff of the nearby "Museum of the Future" that launched earlier this year. World's largest delta 3D printer could build entire houses out of mud or clay.

WASP (World's Advanced Saving Project) is set to unveil Big Delta, reportedly the world's largest delta 3D printer, later this week. This 12-meter (40 ft) tall behemoth was brought to life with the purpose of building nearly zero-cost housing through the use of local materials and as little energy as possible, offering quick and inexpensive relief to disaster areas and addressing the future housing needs of a rapidly growing world population.

ESA explores the concept of a 3D-printed moonbase. The European Space Agency (ESA) is currently exploring the possibility of establishing a permanent lunar base with the aid of 3D printing technology. These buildings were created with a 3D printer. It might not exactly sound appealing to live in, but a Chinese company has constructed two buildings using a 3D printer that recycles industrial waste to form new building material. Herders, Not Farmers, Built Stonehenge. Göbekli Tepe. The function of the structures is not yet clear. Russian Geoglyph: Elk-Shaped Design Found In Ural Mountains, May Predate Peru's 'Nazca Lines' {*style:<ul>*}{*style:<li>*}{*style:<h3>*}Napoleonic Soldiers Buried{*style:</h3>*}{*style:<br>*}A Catholic priest blesses a grave during a burial ceremony for the remains of 110 Napoleonic soldiers who died in a major battle against the Russian army, near the of Studenka, about 100 kilometers (63 miles) east of Minsk, Belarus, Friday, Nov. 2, 2012.

Labyrinth Lies Within Mysterious Desert Drawing. Privacy hedges date back to the Iron Age. A French-Peruvian-Spanish Team Discovers a Chamber in Machu Picchu. Image Source: Flickr : Creative Commons License : Rogerimp. Robot discovers three unexplored passages in 2,000-year-old tunnel near the Pyramid of the Sun in Mexico. By Daily Mail Reporter and Associated Press Reporter Published: 05:54 GMT, 23 April 2013 | Updated: 08:21 GMT, 23 April 2013. An ancient city thought lost is exhumed from the depths of the ocean. NASA Adds to Evidence of Mysterious Ancient Earthworks. Photo High in the skies over , space-age technology has revealed an ancient mystery on the ground. Mysterious Symbols in Kazakhstan: How Old Are They, Really?