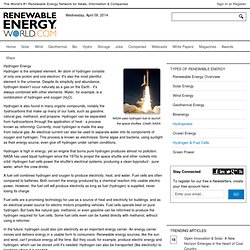 Credit: NASA Hydrogen is the simplest element. An atom of hydrogen consists of only one proton and one electron. It's also the most plentiful element in the universe. Centre for Energy : Fuel Cell. As a member of Canada's Energy BOT Squad here's what you need to know. 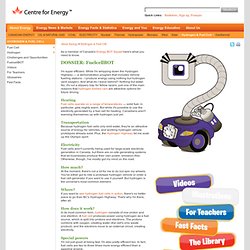 I'm super efficient. While I'm whipping down the Hydrogen Highway — a demonstration program that includes vehicle fuelling stations - I produce energy using nothing but hydrogen (and oxygen). And what do I leave behind? Nothing but water. No, it's not a slippery trap for fellow racers, just one of the main reasons that hydrogen-fuelled cars are attractive options for future driving. Heating Fuel cells operate on a range of temperatures — solid fuel, in particular, gets mighty warm. Transportation Because hydrogen fuel cells only emit water, they're an attractive source of energy for vehicles, and working hydrogen vehicle prototypes already exist. Electricity Fuel cells aren't currently being used for large-scale electricity generation in Canada, but there are on-site generating systems that let businesses produce their own power, emission-free. 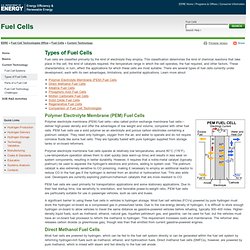 This classification determines the kind of chemical reactions that take place in the cell, the kind of catalysts required, the temperature range in which the cell operates, the fuel required, and other factors. These characteristics, in turn, affect the applications for which these cells are most suitable. There are several types of fuel cells currently under development, each with its own advantages, limitations, and potential applications. Learn more about: Polymer Electrolyte Membrane (PEM) Fuel Cells. Asteroid mining. Artist's concept of asteroid mining Asteroid mining is the exploitation of raw materials from asteroids and other minor planets, including near-Earth objects.[1] Minerals and volatiles could be mined from an asteroid or spent comet then used in space for in-situ utilization (e.g. construction materials and rocket propellant) or taken back to Earth. 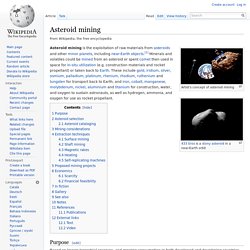 These include gold, iridium, silver, osmium, palladium, platinum, rhenium, rhodium, ruthenium and tungsten for transport back to Earth; and iron, cobalt, manganese, molybdenum, nickel, aluminium and titanium for construction, water, and oxygen to sustain astronauts, as well as hydrogen, ammonia, and oxygen for use as rocket propellant. Purpose[edit] In 2006, the Keck Observatory announced that the binary Jupiter trojan 617 Patroclus,[12] and possibly large numbers of other Jupiter trojans, are likely extinct comets and consist largely of water ice. Asteroid selection[edit] Asteroid cataloging[edit] Mining considerations[edit] Surface mining[edit]

Valuable Asteroid Resources" Scientists think asteroids are leftover material from the early formation of the solar system or debris from the destruction of a planet.

Mining resources will be one way to provide the materials for a hydrogen cell energy economy. – electronics 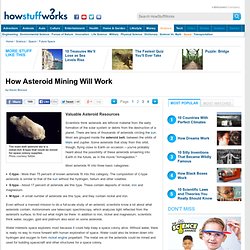 How to make a dry HHO fuel cell cheap & easy part 1 of 4. Geothermal Energy: Iceland volcano drilling suggests magma could become source of high-grade energy. Geologists drilling an exploratory geothermal well in 2009 in the Krafla volcano in Iceland encountered a problem they were simply unprepared for: magma (molten rock or lava underground) which flowed unexpectedly into the well at 2.1 kilometers (6,900 ft) depth, forcing the researchers to terminate the drilling. 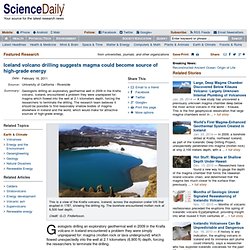 "To the best of our knowledge, only one previous instance of magma flowing into a geothermal well while drilling has been documented," said Wilfred Elders, a professor emeritus of geology in the Department of Earth Sciences at the University of California, Riverside, who led the research team. "We were drilling a well that was designed to search for very deep -- 4.5 kilometers (15,000 feet) -- geothermal resources in the volcano. While the magma flow interrupted our project, it gave us a unique opportunity to study the magma and test a very hot geothermal system as an energy source.

" Hydrogen & Geothermal Energy in Iceland. Geothermal power. Energy Sources. Geothermal energy is created by the heat of the earth. 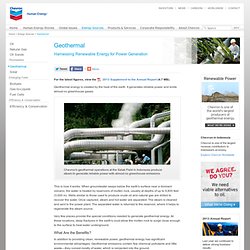 It generates reliable power and emits almost no greenhouse gases. This is how it works: When groundwater seeps below the earth's surface near a dormant volcano, the water is heated by reservoirs of molten rock, usually at depths of up to 9,800 feet (3,000 m). Wells similar to those used to produce crude oil and natural gas are drilled to recover the water. Once captured, steam and hot water are separated. The steam is cleaned and sent to the power plant. Very few places provide the special conditions needed to generate geothermal energy. Geothermal Energy. Geothermal Energy The Earth's heat-called geothermal energy-escapes as steam at a hot springs in Nevada. 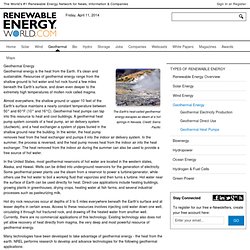 Credit: Sierra Pacific Geothermal energy is the heat from the Earth. It's clean and sustainable. Resources of geothermal energy range from the shallow ground to hot water and hot rock found a few miles beneath the Earth's surface, and down even deeper to the extremely high temperatures of molten rock called magma. Almost everywhere, the shallow ground or upper 10 feet of the Earth's surface maintains a nearly constant temperature between 50° and 60°F (10° and 16°C). In the United States, most geothermal reservoirs of hot water are located in the western states, Alaska, and Hawaii. Hot dry rock resources occur at depths of 3 to 5 miles everywhere beneath the Earth's surface and at lesser depths in certain areas. Energy Sources. Renewable Energy. Water. Energy 101: Marine and Hydrokinetic Energy.

We are told that this energy source is running out--the prices of fossil fuels might be quite supportive of this view. – electronics

We are told this is running out. – electronics

This fuel can pollute the atomsphere, and is also will run out eventually. – electronics

This source of energy has lost some popularity. – electronics