Do we live in a perfect world? 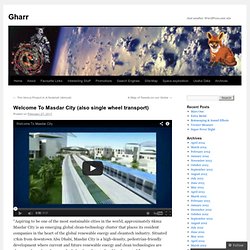 Water Workers. Homelessness Spreads to Middle-Class Families. At a homeless shelter on Skid Row in Los Angeles, there's a man who once made a six-figure salary as a successful producer of Hollywood films and sitcoms. 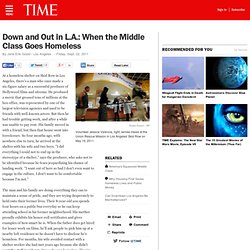 He produced a movie that grossed tens of millions at the box office, was represented by one of the largest television agencies and used to be friends with well-known actors. But then he had trouble getting work, and after a while was unable to pay rent. His family moved in with a friend, but then that house went into foreclosure. So four months ago, with nowhere else to turn, he arrived at the shelter with his wife and two boys. "I did everything I could not to end up in the stereotype of a shelter," says the producer, who asks not to be identified because he fears jeopardizing his chance of landing work. The man and his family are doing everything they can to maintain a sense of pride, and they are trying desperately to hold onto their former lives. Homelessness is not a new phenomenon in California. UNICEF – Put It Right. Are We Living In A Perfect World?

75% of people have shelter and housing; and 25% do not. 100 People, A World Portrait, does not paint a picture of a perfect world. 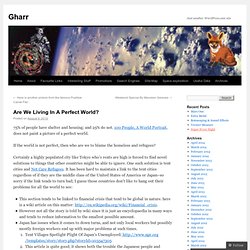 If the world is not perfect, then who are we to blame the homeless and refugees? Certainly a highly populated city like Tokyo who’s rents are high is forced to find novel solutions to things that other countries might be able to ignore. One such solution is tent cities and Net Care Refugees. It has been hard to maintain a link to the tent cities regardless of if they are the middle class of the United States of America or Japan–so sorry if the link tends to turn bad; I guess those countries don’t like to hang out their problems for all the world to see: Even worse, previously there were refugees from war, economic difficulties and even random disasters.

In reality, there is no door we can lock to prevent refugees or homeless people existing in our country (some even are due to our own countries behavior). —End of Article— Like this: Like Loading... Let's Make Cultural Sustainability a Reality - iLearn4Free.