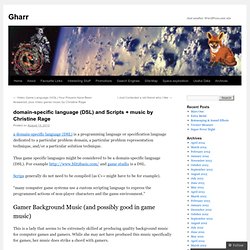 Thus game specific languages might be considered to be a domain-specific language (DSL). For example and game studio is a DSL. Scrips generally do not need to be compiled (as C++ might have to be for example). “many computer game systems use a custom scripting language to express the programmed actions of non-player characters and the game environment.” Video Game Language (ViGL) Your Prayers Have Been Answered. Game specific languages are easier to use, allow for rapid development of games, but are supposedly less flexible. 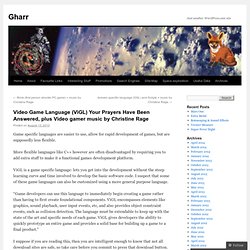 More flexible languages like C++ however are often disadvantaged by requiring you to add extra stuff to make it a functional games development platform. ViGL is a game specific language: lets you get into the development without the steep learning curve and time involved to develop the basic software code. I suspect that some of these game languages can also be customized using a more general purpose language. “Game developers can use this language to immediately begin creating a game rather than having to first create foundational components.

Computer Languages: A to M