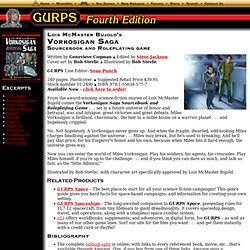 No. Now you can enter the world of Miles Vorkosigan. Illustrated by Bob Stevlic, with character art specifically approved by Lois McMaster Bujold. GURPS Space – The best place to start for all your science fiction campaigns! The complete bibliography is online, with links to every referenced book, movie, etc., that's available through Amazon. Privacy Policy | Contact Us. Dragon Age. Dwarf Fortress:About. [Leave feedback] [edit] General Dwarf Fortress is a single-player "ASCII" game (uses letters and other symbols to represent creatures and objects) which includes both a roguelike adventure mode, and the more popular Dwarf Fortress Mode, which focuses on the creation and survival of a small dwarven settlement. 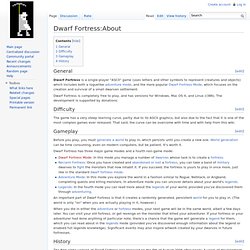 Dwarf Fortress is completely free to play, and has versions for Windows, Mac OS X, and Linux (i386). The development is supported by donations. [Leave feedback] [edit] Difficulty The game has a very steep learning curve, partly due to its ASCII graphics, but also due to the fact that it is one of the most complex games ever released. DF2010:Biome. A biome is a biotic area with homogeneous features, characterized by distinctive plants, animal species and climate. 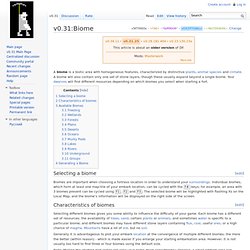 A biome will also contain only one set of stone layers, though these usually expand beyond a single biome. Your dwarves will find different resources depending on which biomes you select when starting a fort. [Leave feedback] [edit] Selecting a biome Biomes are important when choosing a fortress location in order to understand your surroundings. 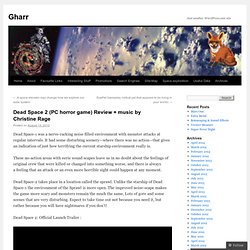 It had some disturbing scenery—where there was no action—that gives an indication of just how terrifying the current starship environment really is. These no-action areas with eerie sound scapes leave us in no doubt about the feelings of original crew that were killed or changed into something worse, and there is always a feeling that an attack or an even more horrible sight could happen at any moment. Dead Space-2 takes place in a location called the sprawl. Unlike the starship of Dead Space-1 the environment of the Sprawl is more open.

The improved noise-scape makes the game more scary and monsters remain the much the same, Lots of gore and some scenes that are very disturbing. Dead Space 2: Official Launch Trailer : Eye Pet Gameplay (young persons pet game) Brink (first person shooter PC game) How this game rates based on scores out of ten Overall Score: 6 — mostly due to short single player game and seemingly no multiplayer internet games (even though the game itself is fun, does allow for internet multiplayer games and it should be more popular then it appears).Multi-player Internet Games: 0 — does not seem to seem to have strong online support. 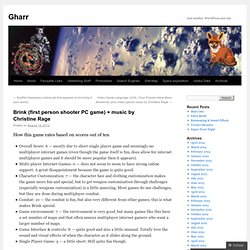 A great disappointment because the game is quite good.Character Customization: 7 — the character face and clothing customization makes the game more fun and special, but to get weapon customization through challenges (especially weapons customization) is a little annoying. Civilization V. Unlike most games, civilization is difficult to review. 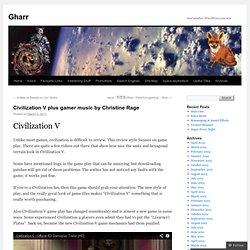 This review style focuses on game play. There are quite a few videos out there that show how nice the units and hexagonal terrain look in Civilization V. Some have mentioned bugs in the game play that can be annoying, but downloading patches will get rid of those problems. The author has not noticed any faults with the game; it works just fine.

First Look: The Sims 4 Official Gameplay Trailer. What is The Sims 4? Happy Simsgiving from The Sims! 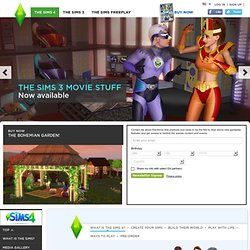 There’s one in almost every culture. It goes by different names – the Chung Chiu Moon Festival in China, Pongal in the southern part of India, the UK’s Harvest Festival or Erntedankfest in Germany. In North America we refer to it as Thanksgiving. And while they may fall on different days and be part of different traditions, they all have one thing in common: a time to take a moment to give thanks for all the good things in one’s life. The Sims team has many reasons to be thankful. We’re accepting artwork between now and the end of November. 1. 2. 3. The Sims. The Sims is a life simulation video game series, developed by EA Maxis and published by Electronic Arts. 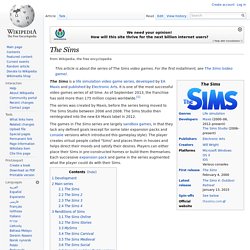 It is one of the most successful video games series of all time. As of September 2013, the franchise has sold more than 175 million copies worldwide.[1] The series was created by Maxis, before the series being moved to The Sims Studio between 2006 and 2008. The Sims Studio then reintegrated into the new EA Maxis label in 2012. The games in The Sims series are largely sandbox games, in that they lack any defined goals (except for some later expansion packs and console versions which introduced this gameplay style). Development[edit] Main series[edit] Official Trailer. Evolve (video game) Evolve is an upcoming sci-fi themed, co-operative first-person shooter being developed by Turtle Rock Studios. 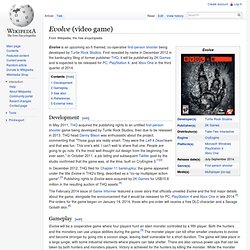 First revealed by name in December 2012 in the bankruptcy filing of former publisher THQ, it will be published by 2K Games and is expected to be released for PC, PlayStation 4, and Xbox One in the third quarter of 2014. In May 2011, THQ acquired the publishing rights to an untitled first-person shooter game being developed by Turtle Rock Studios, then due to be released in 2013. THQ head Danny Bilson was enthusiastic about the project, commenting that "Those guys are really smart. They were the Left 4 Dead team and that was fun.