EMF Report on Today Tonight. Underpants blocks radiation from devices. Smart underwear designed to protect male fertility from radiation emitted by smartphones and laptops has been unveiled by a British scientist. 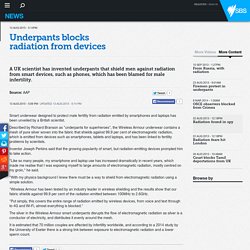 Described by Richard Branson as "underpants for superheroes", the Wireless Armour underwear contains a mesh of pure silver woven into the fabric that shields against 99.9 per cent of electromagnetic radiation, which is emitted from devices such as smartphones, tablets and laptops, and has been linked to fertility problems by scientists. Cellphone safety: Where do you keep your phone? Last Updated May 14, 2015 9:58 AM EDT Update: The Berkeley city council approved the "right to know" proposal by a vote of 9-0, requiring health warnings with the purchase of a cellphone. 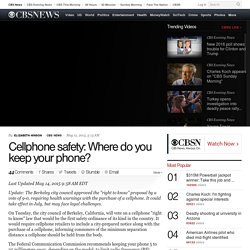 It could take effect in July, but may face legal challenges. On Tuesday, the city council of Berkeley, California, will vote on a cellphone "right to know" law that would be the first safety ordinance of its kind in the country. It would require cellphone retailers to include a city-prepared notice along with the purchase of a cellphone, informing consumers of the minimum separation distance a cellphone should be held from the body.

The Federal Communication Commission recommends keeping your phone 5 to 25 millimeters away, depending on the model, to limit radio frequency (RF) exposure to safe levels. Berkeley might become the first city to adopt such an ordinance, but it's not the first place to try. Her bill was not enacted, but a 2015 version is currently awaiting a floor vote. Dr. Dr. History of Electromagnetic Radiation (EMF) Studies. Electromagnetic Radiation (EMR) Over the centuries technology has slowly evolved, but in recent years, it has developed at an accelerated pace. 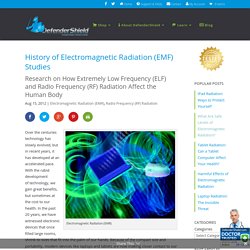 With the rabid development of technology, we gain great benefits, but sometimes at the cost to our health. In the past 20 years, we have witnessed electronic devices that once filled large rooms, shrink to sizes that fit into the palm of our hands. Because of the compact size and portability, modern devices like laptops and tablets are now making closer contact to our body with energy forces that did not exist even a decade ago. Studies: Health Effects of Electromagnetic Radiation & Microwaves « Stop Smart Meters! (UK) Image shown is from the Journal of the American Medical Association and the Environmental Health Trust. 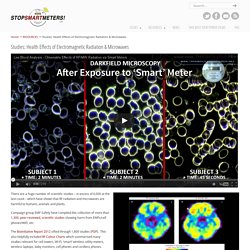 There are a huge number of scientific studies – in excess of 6,000 at the last count – which have shown that RF radiation and microwaves are harmful to humans, animals and plants. Campaign group EMF Safety have compiled this collection of more than 1,300, peer-reviewed, scientific studies showing harm from EMFs/cell phones/WiFi, etc. 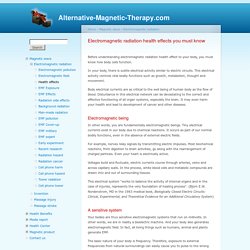 In your body, there is subtle electrical activity similar to electric circuits. This electrical activity controls vital bodily functions such as growth, metabolism, thought and movement. Body electrical currents are as critical to the well being of human body as the flow of blood. Disturbance in this electrical network can be devastating to the correct and effective functioning of all organ systems, especially the brain. It may even harm your health and lead to development of cancer and other diseases. Evaluating-the-role-of-electromagnetic-radiation-in-domestic-building-health-effects-V1.1.-1329696218.pdf. 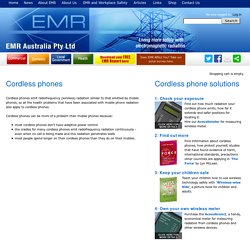 Cordless phones can be more of a problem than mobile phones because: most cordless phones don’t have adaptive power control the cradles for many cordless phones emit radiofrequency radiation continuously - even when no call is being made and this radiation penetrates walls most people spend longer on their cordless phones than they do on their mobiles. 1: Check your exposure Find out how much radiation your cordless phone emits, how far it extends and safer positions for locating it. Hire our Acoustimeter for measuring wireless meter. 2: Find out more. Top Tips to Lower your EMF Exposure. There is a huge amount of uncertainty over how harmful electromagnetic radiation (EMFs) can be to human health, but it is widely regarded that any long-term EMF exposure could be the cause of serious ailments. 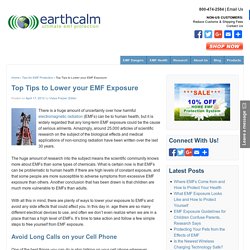 Amazingly, around 25,000 articles of scientific research on the subject of the biological effects and medical applications of non-ionizing radiation have been written over the last 30 years. The huge amount of research into the subject means the scientific community knows more about EMFs than some types of chemicals. EMF Health Hazard Sources: Pipes, Power Lines & Appliances. To Order Call 866-821-8122 Why You Need EMF Home Protection. 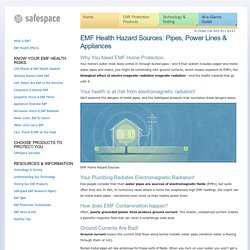 World Health Organization. The Longterm Effects of ElectroMagnetic Radiation. We are bombarded by low levels of radiation from all directions. 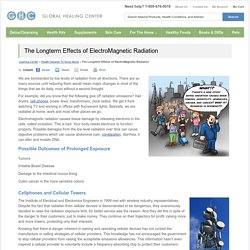 There are so many sources until reducing them would mean major changes in most of the things that we do daily, most without a second thought. For example, did you know that the following give off radiation emissions? Hair dryers, cell phones, power lines, transformers, clock radios. We get it from watching TV and working in offices with fluorescent lights. Basically, we are radiated at home, work and most other places we go. Electromagnetic radiation causes tissue damage by releasing electrons in the cells, called ionization. Possible Outcomes of Prolonged Exposure TumorsIrritable Bowel DiseaseDamage to the intestinal mucus liningColon cancer in the more sensitive colons Cellphones and Cellular Towers The Institute of Electrical and Electronics Engineers in 1999 met with wireless industry representatives. Cellular Towers continue to be erected on office buildings' sides, and tops. 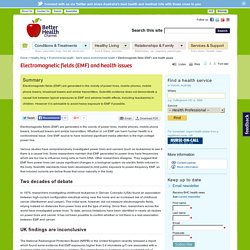 Scientific evidence does not demonstrate a causal link between typical exposures to EMF and adverse health effects, including leaukaemia in children. However it is advisable to avoid heavy exposure to EMF if possible. ELECTROMAGNETIC RADIATION PROBLEMS. Cell_phone_report_EHHI_Feb2012. Rio Pavilion TV: Could electromagnetic radiation contribute to global warming? What is electromagnetic radiation? Electromagnetic energy is a term used to describe all the different kinds of energies released into space by stars such as the Sun. These kinds of energies include some that you will recognize and some that will sound strange. They include: Radio Waves TV waves Radar waves Heat (infrared radiation) Light Ultraviolet Light (This is what causes Sunburns) X-rays (Just like the kind you get at the doctor's office) Short waves Microwaves, like in a microwave oven Gamma Rays All these waves do different things (for example, light waves make things visible to the human eye, while heat waves make molecules move and warm up, and x rays can pass through a person and land on film, allowing us to take a picture inside someone's body) but they have some things in common.