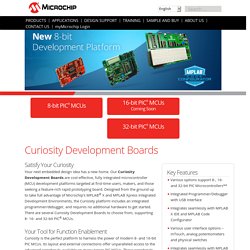 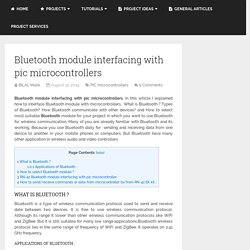 Types of Bluetooth? How Bluetooth communicate with other devices? And How to select most suitable Bluetooth module for your project in which you want to use Bluetooth for wireless communication. Many of you are already familiar with Bluetooth and its working. RC5 Decoder with PIC Microcontroller. Description This project shows how to decode IR remote controls which use RC5 code with a PIC microcontroller. 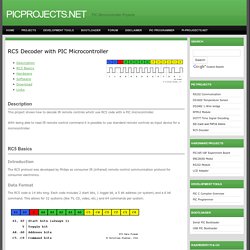 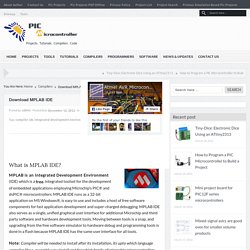 MPLAB is an Integrated Development Environment (IDE) which is a free, integrated toolset for the development of embedded applications employing Microchip’s PIC® and dsPIC® microcontrollers. MPLAB IDE runs as a 32-bit application on MS Windows®, is easy to use and includes a host of free software components for fast application development and super-charged debugging. 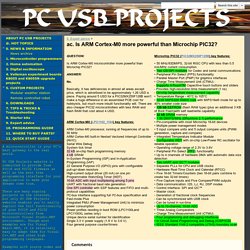 No. Basically, it has deficiencies in almost all areas except price, which is advertised to be approximately 1.26 USD a piece. Microchips 8-bit PIC Microcontrollers (Part 1 of 2) MPLABX. Flash, Damned LED! Flash I say! Getting Started with PIC32 Microcontrollers. This tutorial uses MPLAB v8.56. 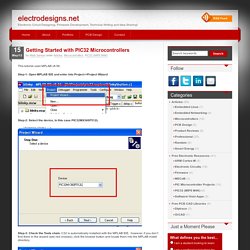 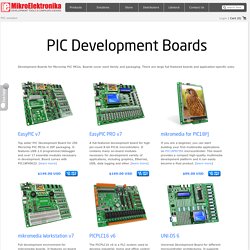 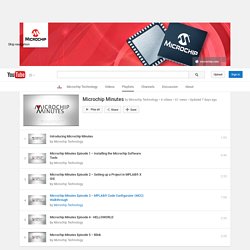 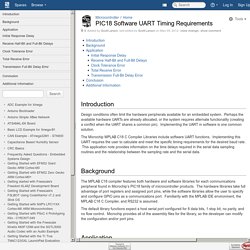 Perhaps the available hardware UARTs are already allocated, or the system requires alternate functionality (creating a conflict when the UART shares a common pin). Implementing the UART in software is one common solution. The Microchip MPLAB C18 C Compiler Libraries include software UART functions. Implementing this UART requires the user to calculate and meet the specific timing requirements for the desired baud rate. Controlling LED brightness using PWM. Pulse Width Modulation or PWM is a term you hear a lot if you are interested in controlling power output using a microcontroller. 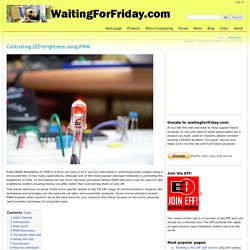 It has many applications, although one of the most popular amongst hobbyists is controlling the brightness of LEDs. In this tutorial we will cover the basic principles behind PWM and how it can be used for LED brightness control including fading out LEDs rather than just turning them on and off. This article will focus on some of the more specific details of the PIC18F range of microcontrollers; however the techniques and principles are the same for all other microcontroller products. Some microcontrollers include PWM modules which perform all of the hard work for you; however this article focuses on the more universal (and scalable) technique of using interrupts. Embed Inc PIC Development Page. Embed Inc is a custom embedded systems development company.

We have done many projects using the Microchip PIC line of microcontrollers and have converged on a structure and methodology for PIC projects that is suitable for the majority of cases. This includes a set of standard macros, subroutines, modules, and host tools. PIC Micro Controller C Routine Library. Microchip PIC, Electronics project. Microcontroller Interfacing. Due to my ladder logic compiler, I often get questions on how to build hardware to connect a micro to the outside world. I have not been able to find a good reference to suggest.

Much of the material online is wrong or incomplete, or reflects good practice circa 1970. None of this is specific to a particular microcontroller or family of microcontrollers; it applies equally well to PICs or AVRs or 8051s or any other processor. Welcome to the Embedded Code Source. PIC vs. AVR smackdown. OK, I know what you people want. You want ultimate fighting, embedded E.E. style. You want to know WHICH IS BETTER, PIC OR AVR? PIClist, Microchip PIC. Welcome to the official PICList home page. The PICList is a collection of people interested in the Microchip PIC and other similar processors who have joined the PICList@MIT.EDU mailing list. This web site is an and archive for the email list which was started, and is still maintained, by James Newton who was a former list member and admin for several years. Mr. Jallib - JAL V2 libraries. HackingLab. Index page. It is currently Tue Jun 02, 2015 2:51 pm View unanswered posts • View active topics Announcements 2 Topics 3 Posts Last post by pjh Sat Nov 22, 2014 12:14 am SuggestionsSubforum: FAQ Factory 25 Topics 212 Posts Last post by ric Sun May 31, 2015 1:34 am Test posts This forum is just for making test posts.Anything posted in here will be automatically purged after a few days. 0 Topics 0 Posts No posts Introductions and general chat Say "hi" here, and any general non PIC related chat. 11 Topics 59 Posts Last post by Charlie_R Fri Mar 13, 2015 11:01 pm Project Show Case Show off your PIC based project. 2 Topics 3 Posts Last post by vloki Wed Mar 11, 2015 11:59 am.