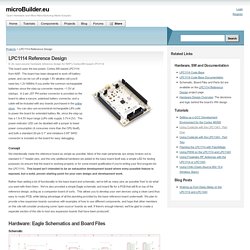 The board has been designed to work off battery power, and can be run off a single 1.5V alkaline cell (you'll need two 1.2V NIMHs if you prefer the common rechargeable batteries since the step-up converter requires ~1.5V at startup). A 2-pin JST PH-series connector is provided on the board to allow a secure, polarised battery connector, and a cable will be included with any boards purchased in the online store. You can also use economical rechargeable LiPo cells to power the board for extended battery life, since the step-up has a 1.5-4.5V input range (LiPo cells supply 3.7V-4.2V). Concept We intentionally made the reference board as simple as possible.

Rather than adding a lot of functionality to the base board and schematic, we've left as many pins as possible 'free' to do what you want with them them. Schematic License. DUI0497A_cortex_m0_r0p0_generic_ug.pdf. DDI0432C_cortex_m0_r0p0_trm.pdf. Tutorial: Using PWM on the LPC1114 and LPC1343 > How to generate a PWM signal using any general-purpose timer on the LPC1100 and LPC1300. 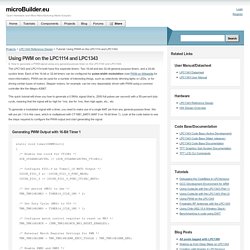 The LPC1343 and LPC1114 both have five seperate timers: Two 16-bit and two 32-bit general purpose timers, and a 24-bit systick timer. Each of the 16-bit or 32-bit timers can be configured for pulse-width modulation (see PWM on Wikipedia for more information). PWM can be used for a number of interesting things, such as selectively dimming lights or LEDs, or for driving certain types of motors. Stepper motors, for example, can be very dependably driven with PWM using a common controller like the Allegro A3967. This quick tutorial will show you how to generate a 0.5KHz signal (that is, 2000 full pulses per second) with a 50-percent duty cycle, meaning that the signal will by high for 1ms, low for 1ms, then high again, etc., etc. To generate a modulated signal with a timer, you need to make use of a single MAT pin from any general-purpose timer. 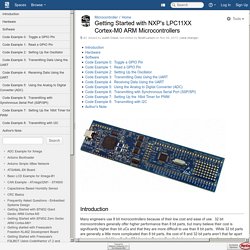 While 32 bit parts are generally a little more complicated than 8 bit parts, the cost of 8 and 32 bit parts aren’t that far apart in many cases. Additionally, the 32 bit parts offer significantly higher performance. In other words, give 32 bit parts a chance! NXP has introduced a very low cost (i.e. often less than $1 in production volumes) line of 32 bit microcontrollers, the LPC111X family. The assumption inherent in this document is that most engineers follow a fairly similar method of learning when presented with a new microcontroller family.

This document is primarily targeted at those who are familiar with 8 bit microcontrollers, but are interested in learning to use a 32 bit part. UM10398. In-Application Programming (IAP) Code Example. For those in need of IAP demo code / example code, here's simple code to test the IAP function for NXP ARM Cortex-M MCUs. 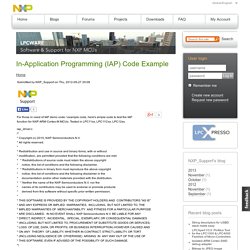