The wars that inspired Game of Thrones - Alex Gendler. The Merry Adventures of Robin Hood by Howard Pyle - Prologue. Excerpt: Prologue (Robin's adventure with the foresters and his meeting with Little John)Originally Published by Charles Scribner's Sons, 1883. 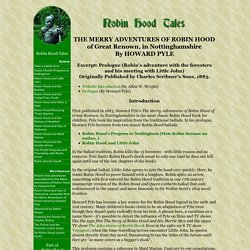 Website Introduction (by Allen W. Wright)Prologue (By Howard Pyle) First published in 1883, Howard Pyle's The Merry Adventures of Robin Hood of Great Renown, in Nottinghamshire is the most classic Robin Hood book for children. Pyle took his inspiration from the traditional ballads. In his prologue, Howard Pyle borrows from two classic Robin Hood ballads: In the ballad tradition, Robin kills the 15 foresters - with little reason and no remorse.

In the original ballad, Little John agrees to join the band very quickly. Howard Pyle has become a key source for the Robin Hood legend in the 20th and 21st century. This prologue contains a reference to Maid Marian. Pyle's storytelling is worthy of praise, but he was also a master illustrator. Giving an account of Robin Hood and his adventure with the King's foresters. At this Robin grew right mad. Robin Hood's Bay. Coordinates: Robin Hood’s Bay is a small fishing village and a bay located within the North York Moors National Park, five miles south of Whitby and 15 miles north of Scarborough on the coast of North Yorkshire, England. 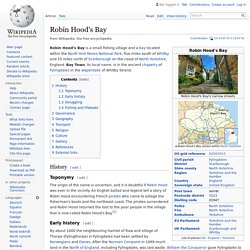 Bay Town, its local name, is in the ancient chapelry of Fylingdales in the wapentake of Whitby Strand. History[edit] Toponymy[edit] The origin of the name is uncertain, and it is doubtful if Robin Hood was ever in the vicinity. Early history[edit] "A fischer tounlet of 20 bootes with Dok or Bosom of a mile yn length In the period 1324-1346 there was an early reference to Robin Hood's Bay. Smuggling[edit] The town, which consists of a maze of tiny streets, has a tradition of smuggling, and there is reputed to be a network of subterranean passageways linking the houses. Fishing and lifeboats[edit] Fishing and farming were the original occupations followed by generations of Bay folk.

Robin Hood's Bay is also famous for the large number of fossils which may be found on its beach. Bram Stoker. Irish novelist and short story writer Abraham "Bram" Stoker (8 November 1847 – 20 April 1912) was an Irish author, best known today for his 1897 Gothic novel Dracula. 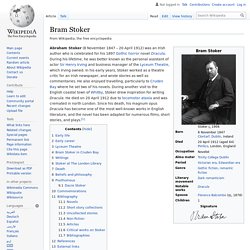 During his lifetime, he was better known as the personal assistant of actor Sir Henry Irving, and business manager of the Lyceum Theatre in London, which Irving owned. Early life[edit] Stoker was born on 8 November 1847 at 15 Marino Crescent, Clontarf, on the northside of Dublin, Ireland.[1] His parents were Abraham Stoker (1799–1876) from Dublin and Charlotte Mathilda Blake Thornley (1818–1901), who was raised in County Sligo.[2] Stoker was the third of seven children, the eldest of whom was Sir Thornley Stoker, 1st Bt..[3] Abraham and Charlotte were members of the Church of Ireland Parish of Clontarf and attended the parish church with their children, who were baptised there,[4] and Abraham was a senior civil servant. 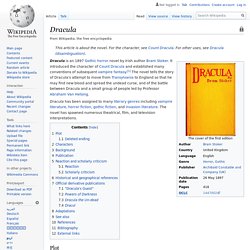 It introduced the character of Count Dracula and established many conventions of subsequent vampire fantasy.[1] The novel tells the story of Dracula's attempt to move from Transylvania to England so that he may find new blood and spread the undead curse, and of the battle between Dracula and a small group of people led by Professor Abraham Van Helsing. Dracula has been assigned to many literary genres including vampire literature, horror fiction, gothic fiction, and invasion literature. The novel has spawned numerous theatrical, film, and television interpretations. Plot. Harry Potter filming at Goathland North Yorkshire. Goathland has been used as a setting in many TV programmes and films, including Victoria Woods "Great Train Journeys", The Noel Edmonds show, Sky TV's "The Wanderer" , Gwyneth Paltrow's "Possession", and of course, the YTV series: Heartbeat, in which the village is known as Aidensfield. 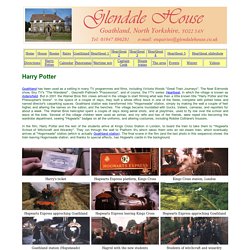 But in 2001 the Warner Bros film crews arrived in the village to start filming what was then a little known title "Harry Potter and the Philosopher's Stone". In the space of a couple of days, they built a whole office block in one of the fields, complete with potted trees and named director's carparking spaces. Which 'Harry Potter' Character Are You? - Quiz.