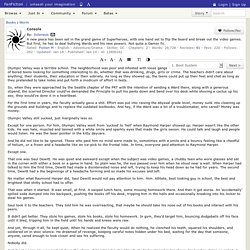 The neighborhood was poor and infested with loose gangs of bored teens looking for something interesting to do, whether that was drinking, drugs, girls or crime. The teachers didn't care about anything; their students, their education or their sobriety. As long as they showed up, the teens could put up their feet and chat as long as they pretended to take notes and put forth a modicum of effort in tests. So, when they were approached by the Seattle chapter of the PRT with the intention of sending a Ward there, along with a generous stipend, the scarred Director could've demanded the Principle to pull his pants down and bend over his desk while shoving a cactus up his ass; they would've done it in a heartbeat.

For the first time in years, the faculty actually gave a shit. Olympic Valley still sucked, just marginally less so. Except for one person. And he did not like to be ignored. Except one. That one was Saul Dewitt. That was when it started. SHINOBI: The RPG Chapter 1, a naruto fanfic. The Following is a fan based work of fiction: Naruto and Naruto: Shippuden are owned by Shueisha, Viz Entertainment and Masashi Kishimoto. 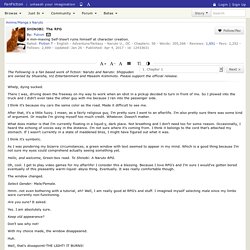 Please support the official release. Whelp, dying sucked. There I was, driving down the freeway on my way to work when an idiot in a pickup decided to turn in front of me. So I plowed into the truck and I didn't even take the other guy with me because I ran into the passenger side. I think it's because my cars the same color as the road. After that, it's a little fuzzy. Ninja Gamer Chapter 1: Reincarnation, a naruto fanfic. Welcome to the Naruto RPG! 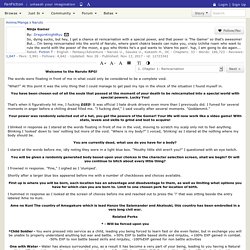 The words were floating in front of me in what could only be considered to be a complete void. "What? " At this point it was the only thing that I could manage to get past my lips in the shock of the situation I found myself in. You have been chosen out of all the souls that passed at the moment of your death to be reincarnated into a special world with special powers. Harry Potter and the Power of the Gamer, a harry potter fanfic. Author's Note: Just letting all know that this is my first attempt at a Harry Potter story. 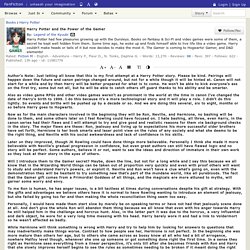 Please be kind. Pairings will happen down the future and canon pairings changed around, but not for a while though it will be hinted at. Canon will not start for a while and by then Harry will be better prepared for what is to come. He won't be able to kick everyone's ass on the first try, some but not all, but he will be able to catch others off guard thanks to his ability and be smarter. Also as video game RPGs and other video games weren't as prominent in the world at the time in canon I've changed the date of Harry's birth to 1999. Now as for the main characters involved in the beginning they will be Ron, Neville, and Hermione, no bashing will be done to them, and some others later on I feel Rowling could have focused on. Later on they improved, though JK Rowling could have done things more believable. The Game of Life Chapter 1: Character Creation, a harry potter fanfic.

OK this is an idea I've had for some time now, the life of our favourite hero as a game. 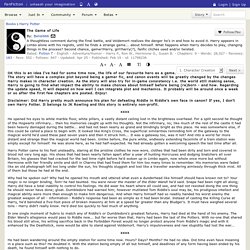 The story will have a complex plot beyond being a gamer fic, and canon events will be greatly changed by the changes Harry makes in character creation. As the story will also try for in-game consistency i.e. the world still making sense, Harry is going to find what impact the ability to make choices about himself before being (re)born - and how. Regarding the update speed, it will depend on how well I can integrate plot and mechanics. King of Games Chapter 1: zero – the gamer, a yu-gi-oh fanfic. Hiyeeh; pikoco here! 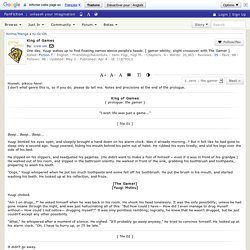 I don't what genre this is, so if you do, please do tell me. Notes and precisions at the end of the prologue. "I wish life was just a game... " [ file 01 ] Beep… Beep… Beep... Yuugi blinked his eyes open, and sleepily brought a hand down on his alarm clock. He slipped on his slippers, and readjusted his pajamas. "Oops," Yuugi whispered when he put too much toothpaste and some fell off his toothbrush. Naruto: Gamer (Remake) Chapter 1, a naruto fanfic. Author's Notes: I got an idea for people that want me to rewrite Overlooked Geniuses and Gamer stories. 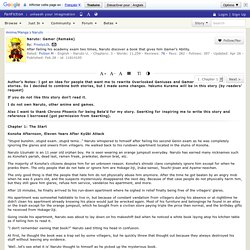 So I decided to combine both stories, but I made some changes. Yakumo Kurama will be in this story (by readers' request) If you do not like this story don't read it. I do not own Naruto, other anime and games. Also I want to thank Chrono Phoenix for being Beta'd for my story. This Game of Life Chapter 1: New Game, a naruto fanfic. This Game of Life Prologue New Game I stared. 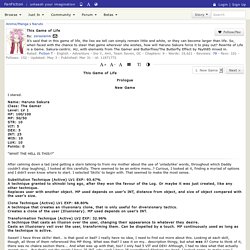 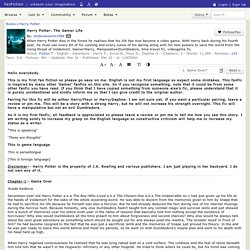 This is my first fan fiction so please go easy on me. English is not my first language so expect some mistakes. Life Of A Gamer Chapter 1, a manhwa/korean comics/만화 fanfic. The Life of a Gamer Disclaimer: I make no claim of ownership to any part of The Gamer, and I am making no profit by writing this Introductions are awkward. 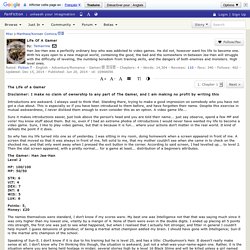 I always used to think that. Standing there, trying to make a good impression on somebody who you have not got a clue about. This is especially so if you have been introduced to them before, and have forgotten their name. Sure it makes introductions easier, just look above the person's head and you are told their name... just say observe, spend a few MP and voila! So why has my life turned into one as of yesterday. The Gamer: Han Jee-HanLevel 2. The Gamer of Sunagakure Chapter 1: The Beginning, a Naruto + Manhwa/Korean Comics/만화 Crossover fanfic. Inspired by "Iron Sand" by jCOOLn and "Death's New Entertainment" by zed019. Rated M because I'm paranoid. Disclaimer: I don't own anything except the OC, this is a fanfiction for enjoyment. Familiar characters you see here belong to their respected authors and owners.

Co-op Mode Chapter 1: Character Creation 1-1, a Manhwa/Korean Comics/만화 + Worm Crossover fanfic. Disclaimer: This is a fan work that was written with no intent for profit and within fair use laws. Worm by Wildbow and The Gamer by Sung San-Young are not owned by me. A New Player Chapter 1, a bleach fanfic. AN: Hello, and welcome to A New Player, my attempt at a Bleach fic with The Gamer elements. And somewhat of a self-insert. Note that there will be POV changes in the future, I just didn't feel the need to do one here. The Gamer Girl Chapter 1: A Rude Awakening, a rwby fanfic. A Rude Awakening Things looked bleak. Surrounded by Ursae, Beowolves and a large King Taijitu, team RWBY was trapped in the center of the town pavilion with more Grimm pouring in from the derelict Mountain Glenn tunnel by the second.

As Yang would've put it... there was literally no brakes between fighting enemies today, being that they'd just crashed through several subterranean chambers on a hell-bent bomb train. "We're really getting no brakes today, aren't we," Yang mumbled beside Blake, causing the adrenaline-filled catgirl beside her to raise a brow. "And somehow I just knew you would say something like that," Blake replied flatly, "Yang, if those are the last words you ever say, I-" And interrupted by the battle roar of the massive reptilian Grimm, the melee began. The Things I do Chapter 1, a rwby fanfic. "Good luck! Make sure to send letters alright? " My eldest sister, Saber, bid me farewell with tears in her eyes. I let off a small smile as I hugged her. "Yeah yeah, I'll try to keep in touch.

" Virtually Real Chapter 1: Begin Game, a harry potter fanfic. Naruto: The Gamer Chapter 1: Troublesome Discoveries, a naruto fanfic. Naruto: The Gamer Inspired by The Gamer and The Legendary Moonlight Sculptor, as well as exocara's Game of Life Disclaimer: Not mine. The Cloud Gamer Chapter 1: Loading, a final fantasy vii fanfic. Hello, if you are reading this than I would like to inform you that this is the first chapter of Cloud Gamer and currently is an updated rewrite from the original story. All the chapters are undergoing similar work at this time and the story is not abandoned nor up for adoption.