Wearing Robert's Crown Book 1, Chapter 1, an a song of ice and fire fanfic. Book 1 - Family, Duty, Honor Ned I Robert seemed to sway slightly as he saw the bodies lying at the foot of the Iron Throne. 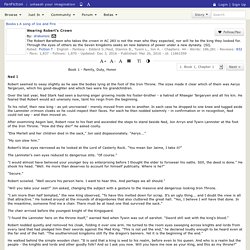 The sizes made it clear which of them was Aerys Targaryen, which his good-daughter and which two were his grandchildren. Over the last year, Ned Stark had seen a burning anger growing inside his foster-brother - a hatred of Rhaegar Targaryen and all his kin. He feared that Robert would act unwisely now, taint his reign from the beginning. To his relief, their new king - as yet uncrowned - merely moved from one to another.

After examining Aegon last, Robert rose to his feet and ascended the steps to stand beside Ned, Jon Arryn and Tywin Lannister at the foot of the Iron Throne. "Elia Martell and her children died in the sack," Jon said dispassionately. "My son slew him. " Robert's blue eyes narrowed as he looked at the Lord of Casterly Rock. The Lannister's own eyes reduced to dangerous slits. "Secure. " Greyjoy alla Breve (SI) Chapter 1: I, II, a game of thrones fanfic. Mirror Notes: This story can be found at https colon slash slash forums dot spacebattles dot com threads/asoiaf-greyjoy-alla-breve-si.352019/ written by AndrewJTalonAt the forum, it has non-canon omakes that have not been included in this story. 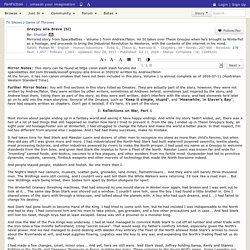 Volume 1 is almost complete as of 2016-07-11 (Australian Western Standard Time). Further Mirror Notes: You will find sections in this story listed as Omakes. They are actually part of the story, however, they were not written by AndrewJTalon, they were written by other writers, sometimes at Andrews behest, sometimes just inspired by the story, and Andrew kept them, listing them as part of the story, as they were well written, didn't interfere with the story, and had elements he'd later go on to add into the main storyline. Triumphant, the Dreamer Chapter 1: Arrival, a harry potter fanfic. Author's Notes: **waves cheerfully from atop her pile of unfinished WIPS** 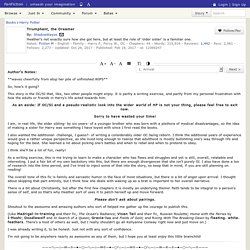 Unfortunate Events, a naruto fanfic. Summary: Sometimes, when one insists on not wanting to become a Shinobi, it is best to listen to them. 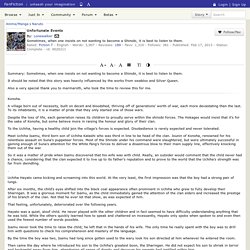 It should be noted that this story was heavily influenced by the works from swabloo and Silver Queen. Also a very special thank you to marmaroth, who took the time to review this for me. Konoha. A village born out of necessity, built on deceit and bloodshed, thriving off of generations' worth of war, each more devastating than the last. To its inhabitants, it is a matter of pride that they only started one of those wars. Despite the loss of life, each generation raises its children to proudly serve within the shinobi forces. To the Uchiha, having a healthy child join the village's forces is expected. Meet Uchiha Isamu, third born son of Uchiha Katashi who was third in line to be head of the clan. Sanitize Chapter 1: Abrasion, a naruto fanfic. Chapter One: Abrasion It took a dislocated shoulder to shock Yui out of the monotony of a peasant's life. 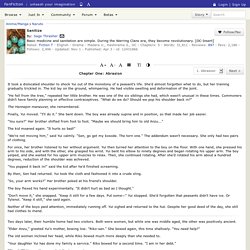 She'd almost forgotten what to do, but her training gradually trickled in. The kid lay on the ground, whimpering. He had visible swelling and deformation of the joint. "He fell from the tree," repeated her little brother. Terminators Wanted, a mass effect fanfic. A/N: I do not own anything except my characters. 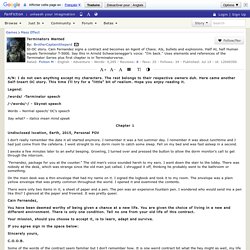 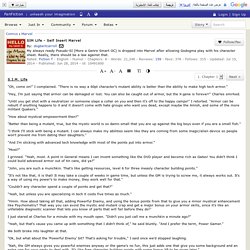 Life "Oh, come on! " I complained. "There is no way a 60pt character's mutant ability is better than the ability to make high tech armor. " "Hey, I'm just saying that armor can be damaged or lost. "Until you get shot with a neutralizer or someone slaps a collar on you and then it's off to the happy camps! " "How about mystical empowerment then? " "Better than being a mutant, true, but the mystic world is so damn small that you are up against the big boys even if you are a small fish.

" "I think I'll stick with being a mutant. "And I'm sticking with advanced tech knowledge with most of the points put into armor. " "Most? " A Threnody for Life Chapter 1: Genesis, a harry potter fanfic. A/N: Well, here I am again. 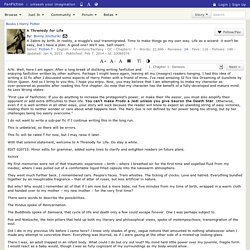 After a long break of disliking writing fanfiction and enjoying fanfiction written by other authors. Perhaps I might leave again, leaving all my (meagre) readers hanging. I had this idea of writing a SI fic after I discussed some aspects of Harry Potter with a friend of mine. I've read amazing SI fics like Dreaming of Sunshine by Silver Queen. And so I bring to you this. "First Law of Fanfiction: If you do anything to increase the protagonist's power, or make their life easier, you must also amplify their opponent or add extra difficulties to their life. 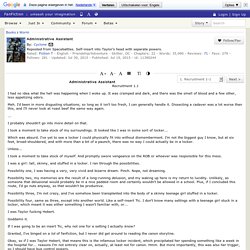 It was cramped and dark, and there was the smell of blood and a few other, less appetizing odors. Co-op Mode Chapter 1: Character Creation 1-1, a Manhwa/Korean Comics/만화 + Worm Crossover fanfic. Disclaimer: This is a fan work that was written with no intent for profit and within fair use laws. 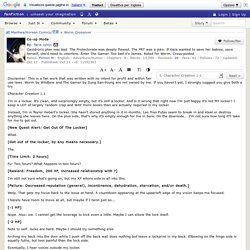 Worm by Wildbow and The Gamer by Sung San-Young are not owned by me. A Not-So-Dream Dream Chapter 1: The Outsider and the Gang, a hunter x hunter fanfic. When I came to, the first thing I noticed was that I was in a dark and clammy room. I blinked my eyes blearily and rubbed at them, before looking around the room in confusion. It was large, that was for certain.

A large crowd of men and woman swarmed the room, most buff and intimidating-looking with a few scrawny people here and there. I squinted, scratching the side of my head, trying to remember when and how I had gotten here. Not Just A Routine Procedure Chapter 1, a mass effect fanfic. Not Just A Routine Procedure Beginning of the Nightmare. Not just A Routine Mission Chapter 1, a mass effect fanfic. 'Well, my day could be going better.' Shepard mused to himself. First the Normandy got blown up. And he died. Then he was alive again. That was a good thing, only he discovered it was two years later and the hospital that brought him back to life was kind of...exploding. Then he discovered the people who saved him were members of a known terrorist organization. And then they told him hundreds of Alliance citizens were going missing by the hundreds. Beacon's Effect Chapter 1: Time Between Times, a mass effect fanfic.

"Kevin! Where'd you go, man? " "Kevin! Wait up! " I heard my friends call from further down the trail. Adjusting the straps on my backpack, I turned back to head back down. Rotted Rowan Chapter 1, a naruto fanfic. Disclaimer: Naruto does not belong to me. Not even a little bit. Warning: Antagonistic OC, death, gore, kidnapping, etc. Beta: Not at the moment. Summary: The stories goes with someone always trying to do good in the Narutoverse, but good is a subjective term.

What qualifies as 'good' for them, could be drastically different for those who actually live in the Narutoverse. This is an Antagonistic! I don't think anyone really wants to be reborn in the Narutoverse. Chipped Mask Chapter 1: Part I - Nope, Not Happening, a naruto fanfic.