Swords and Sorcery: No Route Back Chapter 1, a Harry Potter + Fate/stay night Crossover fanfic. Prologue -o-o-o-o-o-o-o-o- Shirou was getting really tired, but at Rin's insistence, he tried again. 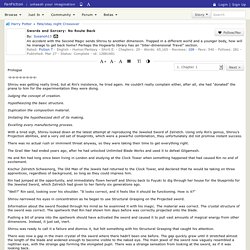 He couldn't really complain either, after all, she had "donated" the prana to him for the experimentation they were doing. Judging the concept of creation. Hypothesizing the basic structure. Duplication the composition material. Imitating the hypothesized skill of its making. Excelling every manufacturing process. With a tired sigh, Shirou looked down at the latest attempt at reproducing the Jeweled Sword of Zelretch. There was no actual rush or imminent threat anyway, so they were taking their time to get everything right.

The Grail War had ended years ago, after he had unlocked Unlimited Blade Works and used it to defeat Gilgamesh. He and Rin had long since been living in London and studying at the Clock Tower when something happened that had caused Rin no end of excitement. "Well? " Shirou narrowed his eyes in concentration as he began to use Structural Grasping on the Projected sword. The Unicorn and The Slayer Chapter 1: Default Chapter, a book of amber fanfic. This is a crossover story combining the Amber universe created by the late, great Roger Zelazny and BTVS. 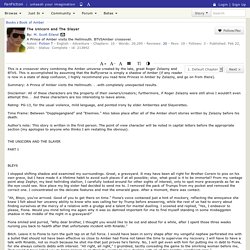 This is accomplished by assuming that the Buffyverse is simply a shadow of Amber (if any reader is now in a state of deep confusion, I highly recommend you read Nine Princes in Amber by Zelazny, and go on from there). Summary: A Prince of Amber visits the Hellmouth. . .with completely unexpected results. Disclaimer: All of these characters are the property of their owners/creators; furthermore, if Roger Zelazny were still alive I wouldn't even attempt this. . .but these characters are too interesting to leave alone.

Rating: PG-13, for the usual violence, mild language, and pointed irony by elder Amberites and Slayerettes. Time Frame: Between "Dopplegangland" and "Enemies. " Author's note: This story is written in the first person. Labyrinth of Chaos Chapter 1, a Labyrinth + Book of Amber Crossover fanfic. Labyrinth of Chaos Author's Note: I'm sure that certain parts of this story are going to be old hat for the few but proud Amberites reading this crossover, but for the benefit of my protagonist (and the Listians/Labyrinthians of Shadow Earth not familiar with the One…er… *looks over shoulder, sees nodding* …Two True Realms), a certain amount of the basics are going to be rehashed up front so nobody's confused later. 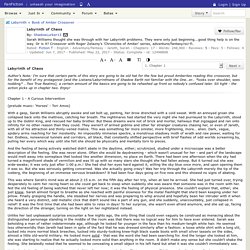 Sit tight - the action picks up in chapter two. Enjoy! Chapter 1 - A Curious Intervention (prelude music: 'Horses' - Tori Amos) With a gasp, Sarah Williams abruptly awoke and sat bolt up, panting, her brow drenched with a cold sweat. And the feeling of being actively watched didn't abate in the daytime, either; scrutinized, studied under a microscope was a better description of the feeling. A Stranger War Chapter 1, a Mass Effect + Worm Crossover fanfic. Chapter 1 "Commander Erin Shepard, Spectre. 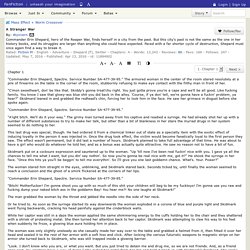 Service Number SA-477-39-95. " The armored woman in the center of the room stared resolutely at a pile of firearms on the table in the corner of the room, stubbornly refusing to make eye contact with the filthy man in front of her. "C'mon sweetheart, don' be like that. Grind Chapter 1: 1-1, a X-overs + Worm Crossover fanfic. Grind 1.1 I walked into the Library. 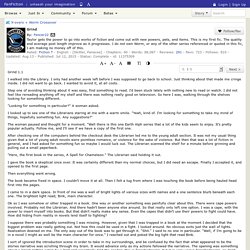 I only had another week left before I was supposed to go back to school. Just thinking about that made me cringe inside. With Grace and Elegance Chapter 1: Scatter 1-1, a Bleach + Worm Crossover fanfic. Well. 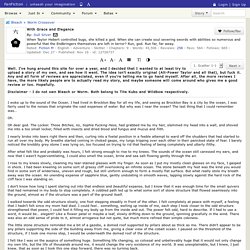 I've hung around this site for over a year, and I decided that I wanted to at least try to upload a story of my own, and see how it went. The idea isn't exactly original (Alt-Power Taylor and all that), but fuck it. Any and all form of reviews are appreciated, even if you're telling me to go hand myself. After all, the more reviews I have, the more likely people are to actually read my story, and maybe someone will come around who gives me a good review or too. The Wedding Crashers Chapter 1: Don't Bring Me Down, a Supernatural + Twilight Crossover fanfic. Title: The Wedding Crashers Author: Das Mervin and Mrs. 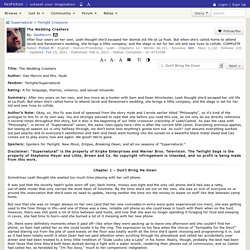 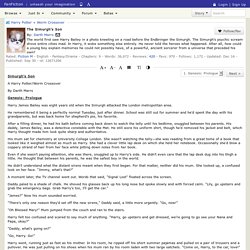 He remembered it being a perfectly normal Tuesday, just after dinner. After a filling dinner, he had his bath before coming back down to watch the telly until his bedtime, snuggled between his parents. His mum sat for chemistry at University College London. Even if she wasn't paying attention, she was there, snuggled up to Harry's side. He didn't understand what the distant sirens meant when they first began. God Slaying Blade Works Chapter 1: Prologue: The Report, a Fate/stay night + Campione!/カンピオーネ! Crossover fanfic.

Disclaimer: The works of Type-Moon and Jō Taketsuki are their own despite my most fervent wishes. 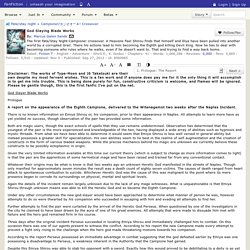 This is a fan work and if anyone does pay me for it the only thing it will accomplish is to get me into trouble. This is being done purely for fun, constructive criticism is welcome, and flames will be ignored. Please be gentle though, this is the first fanfic I've put on the net. God Slayer Blade Works Prologue A report on the appearance of the Eighth Campione, delivered to the Witenagemot two weeks after the Naples Incident. There is no known information on Emiya Shirou or, his companion, prior to their appearance in Naples. Champion of a Distant Dream Chapter 1: Prologue: A Distant Dream, a Fate/stay night + Campione!/カンピオーネ! Crossover fanfic. Prologue: A Distant Dream His consciousness was breaking apart. 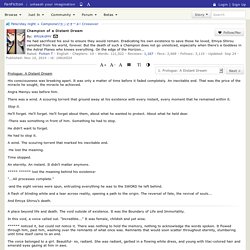 It was only a matter of time before it faded completely. An inevitable end. Harry Potter and the Natural 20 Chapter 1: Solo Adventures, a Harry Potter + Dungeons and Dragons Crossover fanfic. Disclaimers: This story is a Dungeons and Dragons/Harry Potter crossover, and primarily aimed at readers who are fans of both. That said, people only vaguely familiar with either Harry Potter or D&D will still likely get most of the enjoyment this story has to offer.

For those who don't know much about either, reading a quick plot summary of Harry Potter and the Philospher's Stone (say, on Wikipedia) and skimming the article on D&D will likely suffice. Anyone still confused can search d20srd (.org), a wonderful website with the entirety of the D&D 3.5 rules available for free. Players of AD&D, D&D 3.0, 4th edition, Pathfinder, and probably other RPGs will probably be just fine. You can check my Author's Page for a link to Milo's character sheet, more details, and a link to Semiautomagic, an RPG I'm working on, currently available as a free beta. A Knight's Tale as Inquisitor Chapter 1, a Fate/stay night + Dragon Age Crossover fanfic. A story requested. If this story is well-liked, I will make this a series. Fate/Zero and Dragon Age: Inquisition do not belong to me, they belong to their rightful owners. FateDragon's Age- Champion and Dancer, a Fate/stay night + Dragon Age Crossover fanfic.

Dear Readers, Because of writer's block that is impeding my process for the next chapter of Blade of the Emperor, I am taking the honored Gabriel Blessing approach to dealing with writer's block, A.K.A. the bane of all authors: WRITE MORE FANFICTION! Yeah...I know. I'm a horrible person aren't I? I hope you enjoy the latest bout of madness that came from a free-write session as I listened to the soundtrack for Evangelion 2.22: You Can (Not) Advance. Phase Shift Chapter 1, a Harry Potter + Fate/stay night Crossover fanfic. The universe is a machine that runs itself. The chain of events perpetuated by thinking individuals constantly breaks and reforms itself, with each choice begetting more, and so on. However, there is always a plan, always an ultimate goal and a pathway to that goal. Despite what the scientists and intellectuals of every reality might say, entropy and chaos do not factor in to the universe's great design.

Everything always proceeds according to the Scenario. Always. Matilda of Hogwarts Chapter 1: The Red Ribbon and the Candy Shop, a Harry Potter + Matilda Crossover fanfic. Based On: Harry Potter by J.K. Rowling, Matilda by Roald Dahl, and Charlie and the Chocolate Factory by Tim Burton and Roald Dahl. Disclaimer: This is a work of fan fiction, written for entertainment and not for profit. I own nothing but the plot I made up, a small number of OCs (such as Orinthia Greengrass and Watson the Talking Parrot), and the fictional nation of Rainland. (I've set Willy Wonka's hometown in said fictional country; but please note that while Rainland is my creation, Wonka's hometown is not.

Neither Tim Burton nor Roald Dahl gave that town a name, so I've dubbed it ''Rain Creek''.) Harry Potter and the Alternative Tournament Chapter 1, a Harry Potter + Mary Poppins Crossover fanfic. A/N: It's my take on the Goblet of Fire, Mashup Version: Harry's got a new Headmistress and new Professors from another great magical tradition! A Magus Among Ninjas Chapter 1, a Naruto + Fate/stay night Crossover fanfic. A battle will only end with a winner and a loser. Often times, the one's who lose most are those caught in between. Yet all, be it the winner, or the loser, will lose something important to them, whether it's a part of themselves, or a person more precious to them than the world.

Only yesterday had she arrived at the ancestral Einzbern castle that would serve as her base for the coming Heaven's Feel ritual. It was placed in an out of the way forest close to Fuyuki City, the place where the War would be conducted. Now she knelt down and reverently placed her artifact that the Einzbern family had painstakingly searched for to offer her the greatest chance of defeating her foes. A Seventh Path: Path of Swords Chapter 1, a Naruto + Fate/stay night Crossover fanfic. I own nothing and no money was made. Thinking was hard... How hard it was to focus when your senses were nothing but a blur. The Rose in the Wasteland Chapter 1, a Naruto + Fate/stay night Crossover fanfic. "I'll never forgive any of you for this!

All of you monsters who'd disregard a knight's honor for personal gain…. " There was blood running from his eyes and staining his lips red. Fate Infinite Zero Chapter 1, a Harry Potter + Fate/stay night Crossover fanfic. Hunted, a Left 4 Dead + Walking Dead Crossover fanfic. He had made this trip a dozen times in the past few months. Go to the outskirts Atlanta for a few needed supplies, stay away from the main streets and keep to the back alleys, and get out as soon as possible.

Paranoid or Prepared:How an Average Wizard Can Survive Nearly Anything Chapter 1: Robbing Costco, a Harry Potter + Walking Dead Crossover fanfic. At the end of communication, people were all saying it was like the world had ended overnight. Harry and Hermione knew better. Tomb of the First Men Chapter 1, a Harry Potter + A song of Ice and Fire Crossover fanfic. The Tomb of the First Men For StarLight Massacre Warning! This story contains SLASH and MPREG Introduction: This takes place in an altered timeline for GoT/ASoIaF.