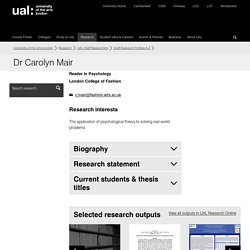 Her research interests lie in the application of theories from psychology, to improve performance and enhance well-being. She has published more than 40 refereed papers. A Cognitive and Social Psychological Perspective on the Demand for Fashion - UAL Research Online. Applying Psychology in Fashion. Speaker: Dr Carolyn Mair (Reader in Psychology, London College of Fashion, CPsychol, CSci, AFBPsS ) London College of Fashion's mission, 'Better Lives', demonstrates its commitment to improving well-being through the discipline of fashion to drive change, build a sustainable future and improve the way we live. 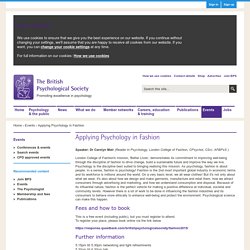 Psychology is the discipline best suited to bringing realising this mission. McDermott Pettijohn. Karen Pine - Psychologist, Author and Speaker. 30 Fascinating Facts About Fashion Psychology  Do you regard clothing as something that keeps you warm and looking good? 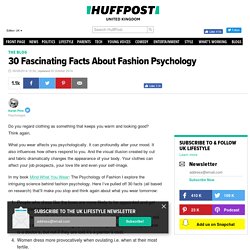 Think again. What you wear affects you psychologically. It can profoundly alter your mood. It also influences how others respond to you. And the visual illusion created by cut and fabric dramatically changes the appearance of your body. In my book Mind What You Wear: The Psychology of Fashion I explore the intriguing science behind fashion psychology. People who dress like the boss are more likely to be appointed and get promoted quicker.Men are more likely to approach a women for a date if she is wearing red.People show more mental agility when wearing a white coat they believe is a doctor’s, but not if they are told it’s a painter’s coat.Women dress more provocatively when ovulating i.e. when at their most fertile.Nine out of ten women own at least one item of clothing they have never worn.

The Psychology of Fashion & Dress Style. Personal style and dress sense are an important means of communication. 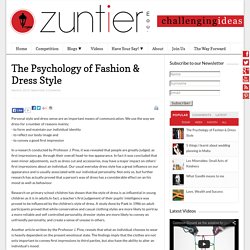 We use the way we dress for a number of reasons mainly; - to form and maintain our individual identity - to reflect our body image and - to convey a good first impression In a research conducted by Professor J. Pine, it was revealed that people are greatly judged, as first impressions go, through their overall head-to-toe appearance. Kimball Young: Social Psychology: Chapter 23: Fashion as Collective Behavior. Kimball Young Table of Contents | Next | Previous A. 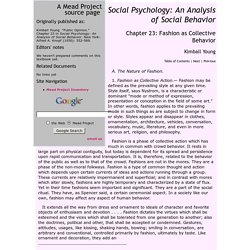 The Nature of Fashion. 1. Fashion as Collective Action.— Fashion may be defined as the prevailing style at any given time. Fashion is a phase of collective action which has much in common with crowd behavior. It extends all the way from dress and ornament to ideals of character and favorite objects of enthusiasm and devotion. . . . . (553) element of grace and pleasure to the intercourse of men and make it easier. In a static, unchanging society where class or caste lines are well drawn, fashion in the modern sense can hardly be said to exist. Every class of Japanese society was under sumptuary regulation. What Your Clothes Might Be Saying About You. PRIZM > Market Segmentation Research, Tools, Market Segment Research, - Market Segments, Consumer Markets, Customer Segmentation Profiling. The Young & Wireless group consists mostly of young, upscale singles and couples who tend to be technology trendsetters. 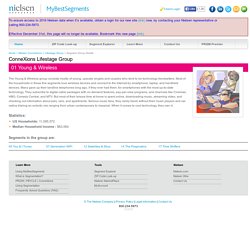 Most of the households in these five segments love wireless devices and connect to the Internet by smartphone, laptop, and handheld devices. Many gave up their landline telephones long ago, if they ever had them, for smartphones with the most up-to-date technology. Evolutionary psychology: "fashionable ideology" or "new foundation"? By Oliver Curry. Cognitive mechanisms for explaining dynamics of aesthetic appreciation. Why Fashion Matters to You. The fashion industry is at once the most visible and overlooked of cultural sectors. 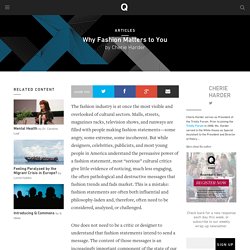 Malls, streets, magazines racks, television shows, and runways are filled with people making fashion statements—some angry, some extreme, some incoherent. But while designers, celebrities, publicists, and most young people in America understand the persuasive power of a fashion statement, most “serious” cultural critics give little evidence of noticing, much less engaging, the often pathological and destructive messages that fashion trends and fads market. This is a mistake: fashion statements are often both influential and philosophy-laden and, therefore, often need to be considered, analyzed, or challenged.

One does not need to be a critic or designer to understand that fashion statements intend to send a message. The content of those messages is an increasingly important component of the state of our culture. Self-Esteem, Susceptibility to Interpersonal Influence, and Fashion Attribute Preference in Early Adolescents by Gregory M. Rose, David M. Boush, and Marian Friestad. Download Limit Exceeded. Introduction to Demographic and Social Influences : Berg Fashion Library. The Social Psychology of Dress : Berg Fashion Library. Authors: Kim K.P. 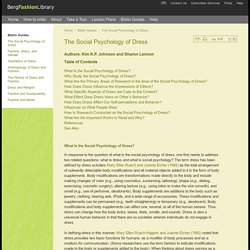 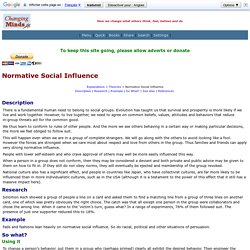 | See also | References Description There is a fundamental human need to belong to social groups. Evolution has taught us that survival and prosperity is more likely if we live and work together. We thus learn to conform to rules of other people. This will happen even when we are in a group of complete strangers. People with lower self-esteem and who crave approval of others may well be more easily influenced this way. The Psychology Of Materialism, And Why It's Making You Unhappy. More money, more problems? 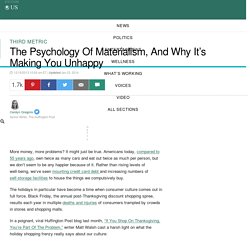 It might just be true. Americans today, compared to 55 years ago, own twice as many cars and eat out twice as much per person, but we don’t seem to be any happier because of it. Rather than rising levels of well-being, we’ve seen mounting credit card debt and increasing numbers of self-storage facilities to house the things we compulsively buy. The holidays in particular have become a time when consumer culture comes out in full force. Black Friday, the annual post-Thanksgiving discount shopping spree, results each year in multiple deaths and injuries of consumers trampled by crowds in stores and shopping malls.

In a poignant, viral Huffington Post blog last month, “If You Shop On Thanksgiving, You’re Part Of The Problem,” writer Matt Walsh cast a harsh light on what the holiday shopping frenzy really says about our culture: That’s our entire economic system: buy things. Consumer culture may be harming individual well-being. Money really can’t buy you happiness. Materialistic Values, Relative Wealth and Person Perception: Social Psychological Belief Systems of Adolescents From Different Socio-Economic Backgrounds by Helga Dittmar and Lucy Pepper. , Pages 40-45 , Psychology Division, Social Sciences, University of Sussex This paper aims to develop a social psychological perspective on a particular dimension of materialism as an orientation towards consumer society: the perception of other people in the context of their material goods and relative wealth.

It examines the extent to which social class differences exist when British adolescents form first impressions of an affluent or less affluent person, and it also asssesses whether person perception in a material context is influenced by a perceiver's endorsement of a materialistic outlook as an individual value orientation. Findings suggest that both British working-class and middle-class adolescents agree on the predominantly positive qualities of affluent as compared to less affluent individuals, and that materialistic values influence impressions only to the extent that aspects of wealth and poverty stereotypes are reproduced in a more or less pronounced fashion. 1.

The Madness of Materialism. Consumerism and its discontents. Compared with Americans in 1957, today we own twice as many cars per person, eat out twice as often and enjoy endless other commodities that weren't around then--big-screen TVs, microwave ovens, SUVs and handheld wireless devices, to name a few. But are we any happier? Certainly, happiness is difficult to pin down, let alone measure.

But a recent literature review suggests we're no more contented than we were then--in fact, maybe less so. Psychological Effects of Materialism and Work on Happiness – Matt Brundage. Happiness for many is the elusive butterfly. But it is merely the means by which we attain happiness that is flawed, not the ends. Our recent fixation on work is more of a product of our struggle for happiness than it is an awakening of some altruistic work ethic.

For many, work has supplanted community life and has had an adverse effect on happiness. What Psychology Says About Materialism and the Holidays. Would the holidays be the same without some materialism in the mix? In today’s consumer society, what does it mean to be materialistic, and is that necessarily a bad thing? Psychologists have conducted research that has helped answer those questions and many more.