World’s Large Cities Move Water Equivalent to Ten Colorado Rivers to Meet their Annual Water Needs. As cities grow in population and economic activity, they reach further and further out to find water to meet their needs. 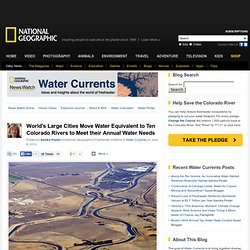 Now, a new study has estimated that collectively the world’s large cities, defined as those with at least 750,000 people, move 504 billion liters (133 billion gallons) of water a day a cumulative distance of some 27,000 kilometers. Positioned end to end, the canals and pipelines transporting that water would stretch halfway around the world.

The volume transferred annually is equivalent to the yearly flow of 10 Colorado Rivers. Many large cities tap supplies not only in their own watersheds, but also in others far afield. Los Angeles, California, with imports of 8.9 billion liters per day from distant rivers, ranks first in the world in cross-basin water transfers, according to the study, published this week in the journal Global Environmental Change. The Los Angeles River Is That One Place You'll Recognize But Don't Know Why. Stark concrete. 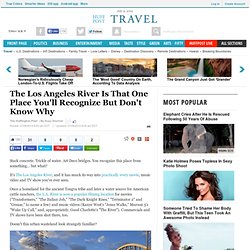 Trickle of water. Art Deco bridges. You recognize this place from something... but what? It's The Los Angeles River, and it has snuck its way into practically every movie, music video and TV show you've ever seen. Once a homeland for the ancient Tongva tribe and later a water source for American cattle ranchers, the L.A. GOMACO World 36.2 - The All-American Canal: Slipforming 72 Feet (21.9 m) Wide... A Successful Completion to the Canal Project – Coffman Specialties finished the slipform paving portion of the All-American Canal in April 2008. 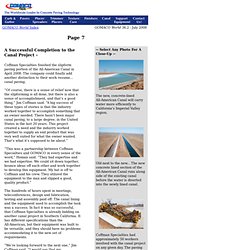 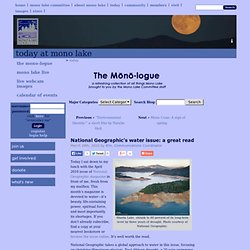 She also oversees the Field Seminar program. Elin is an EMT on the Lee Vining Fire Department, loves sitting at Latte Da Coffee Cafe immersed in a good book, and watches English Premier League football (soccer) at any opportunity.See All Posts by Elin (182)Contact Elin Shasta Lake, shrunk to 60 percent of its long-term level by three years of drought. Photo courtesy of National Geographic. Today I sat down to my lunch with the April 2010 issue of National Geographic magazine in front of me, fresh from my mailbox. Water Calculator Methodology. National Geographic's water footprint calculator is designed to give U.S. residents an estimate of the water they use on a daily basis. 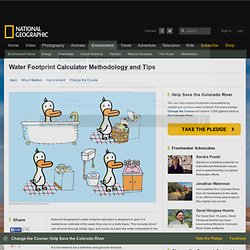 This includes direct use at home through toilets, taps, and hoses, but also the water embedded in the production of food crops, electronics, paper products, electricity, transportation fuels, and more. The calculator is meant to be an educational tool that gives users a rough estimate of how much water it takes to keep their daily lives afloat.

It is not meant to be a definitive and granular analysis. We give you an individual footprint for household water use (indoor and outdoor), for your diet, your energy and transportation choices, and for the material goods and services you rely on or treat yourself to—from visiting the hospital to purchasing a new TV. In all but the outdoor section, the footprint relies on a baseline average that your responses are either added to or subtracted from. The Hidden Water We Use. Tibetan Plateau. "Third Pole" redirects here. 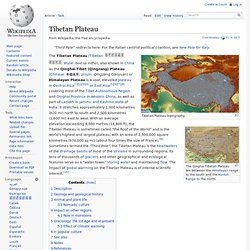 For the Italian centrist political coalition, see New Pole for Italy. Tibetan Plateau topography The Qinghai-Tibetan Plateau lies between the Himalayan range to the south and the Kunlun Range to the north. The Tibetan Plateau (Tibetan: བོད་ས་མཐོ།, Wylie: bod sa mtho), also known in China as the Qinghai-Tibet (Qingzang) Plateau (Chinese: 青藏高原; pinyin: Qīngzàng Gāoyuán) or Himalayan Plateau is a vast, elevated plateau in Central Asia[1][2][3][4] or East Asia[5][6][7][8] covering most of the Tibet Autonomous Region and Qinghai Province in western China, as well as part of Ladakh in Jammu and Kashmir state of India. It stretches approximately 1,000 kilometres (620 mi) north to south and 2,500 kilometres (1,600 mi) east to west. 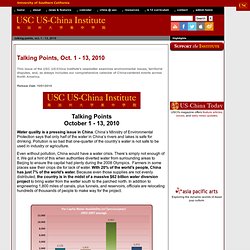 Release Date: 10/01/2010 Talking PointsOctober 1 - 13, 2010 Water quality is a pressing issue in China. China’s Ministry of Environmental Protection says that only half of the water in China’s rivers and lakes is safe for drinking. Pollution is so bad that one-quarter of the country’s water is not safe to be used in industry or agriculture. Even without pollution, China would have a water crisis. Making every drop count - Article by Rohini Nilekani in the Outlook. Article and Image courtesy: OutlookAuthor: Rohini Nilekani Widespread and perennial conflicts over land are a curtain raiser to the coming conflicts over water, a sector that faces a similar lack of legal and policy consensus. 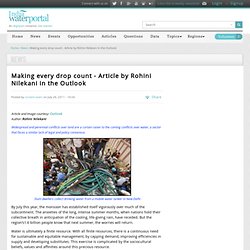 Kenya's Giant Aquifer Highlights Groundwater's Critical Role. Groundwater Recharge. Desalination-main. NatGeo. The Water-Energy Nexus. Flo Bullough writes on the concept of the water-energy nexus; its implications for energy and water security and the impact of climate change and future planning and regulation. 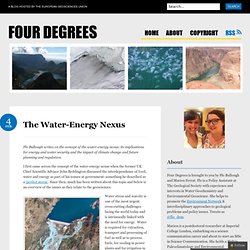 I first came across the concept of the water-energy nexus when the former UK Chief Scientific Advisor John Beddington discussed the interdependence of food, water and energy as part of his tenure at government: something he described as a ‘perfect storm’. Desalination. World's biggest pool holds 66 million gallons. The Crystal Lagoon at San Alfonso del Mar resort, Chile, is large enough for sailing and comes with its own fake beach By Lyle Brennan Published: 08:14 GMT, 21 May 2012 | Updated: 07:03 GMT, 1 June 2014 At the San Alfonso del Mar resort in Chile, a quick dip could well turn into a marathon. 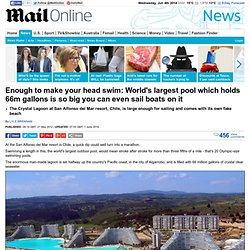 Water. PepsiCo takes a comprehensive approach to water stewardship. The Hidden Water We Use.