How to Use Social Media for Trend Research. Introducing More Genders on Tinder. Tinder Just Became Trans Inclusive With 37 New Custom Gender Options. Tinder is overhauling gender on the platform. 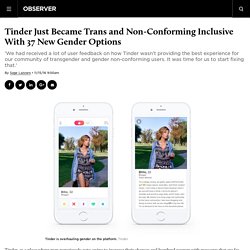 How Genderless Dressing is More Than a Trend. Fashion Week is, of course, when designers present their new collections to the world and with that their interpretations of the trends for the coming seasons. 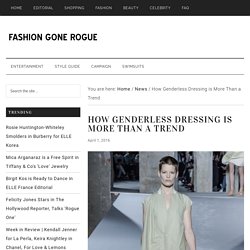 Except this time things were different. The runways of recent have been distinctly more androgynous than we have seen before. In fact, this new movement goes beyond androgyny, which implies clothing that is somewhat gender-neutral. Designers like Rick Owens and Rad Hourani have been designing genderless fashion for years, but the latest collections from more traditional fashion labels like Gucci and Prada have seen gender-neutral clothing arrive in mainstream fashion. Tinder Just Became Trans Inclusive With 37 New Custom Gender Options. Why changing perceptions is the key to gender equality. In 1970 the Equal Pay Act was passed, prohibiting any gender bias in how men and women were paid or treated at work. 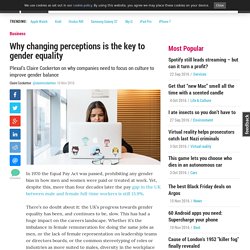 Yet, despite this, more than four decades later the pay gap in the UK between male and female full-time workers is still 13.9%. There’s no doubt about it: the UK’s progress towards gender equality has been, and continues to be, slow. This has had a huge impact on the careers landscape. Whether it’s the imbalance in female remuneration for doing the same jobs as men, or the lack of female representation on leadership teams or directors boards, or the common stereotyping of roles or industries as more suited to males, diversity in the workplace remains a vital issue. What does 'gender-fluid' mean?

Gender fluidity, when gender expression shifts between masculine and feminine, can be displayed in how we dress, express and describe ourselves. 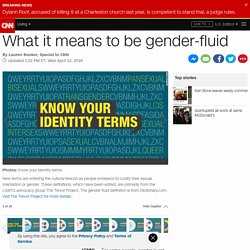 Everyone's gender exists on a spectrum, according to Dot Brauer, director of the LGBTQA Center at the University of Vermont. Tinder update rolls out transgender-friendly and gender fluid identity options. The capital’s most popular dating app has just rolled out new features to help its transgender users to have a better experience finding love on the app. 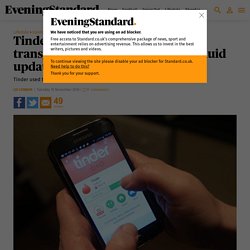 Until now, Tinder users were offered only two options when selecting their identity - man or woman. But in an effort to better recognise the diversity of its users, it now offers 35 different gender options to choose from. These include the identity terms “Gender Fluid”, “Two-Spirit”, “Pangender” and “Neither”. And if users can’t find the term that describes them, they can type in any term that best describes their gender identity or choose to hide their gender completely, the company says. "Our goal is to provide a product that gives our transgender and gender non-conforming users a better experience on Tinder," CEO Sean Rad said in a statement. Birmingham City University - Sign In. Birmingham City University - Sign In. Gender pay gap means women 'working for free from now until 2017' Women will in effect work for free for the rest of the year because of the gender pay gap, which will take 60 years to close at the current rate of progress, campaigners say. 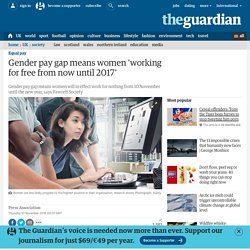 The Fawcett Society called for more action from the government and employers to tackle pay discrimination, job “segregation” and help women into senior posts. Thursday has been labelled equal pay day (EPD), with the society saying the 13.9% pay gap means women are in effect working for nothing from now until the end of the year. The Fawcett Society chief executive, Sam Smethers, said: “A root cause of the gender pay gap is that we don’t value the work done by women. As we mark EPD this year, we are focusing on the fundamental question of who and what we value and asking why it is that we don’t value women and the work they do – paid or unpaid. “Equal value goes to the heart of the fight for pay equality, because the reality is that if it is a sector dominated by women the pay will be lower. 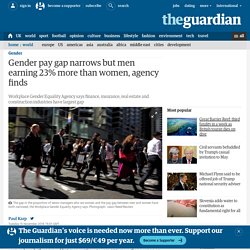 The agency’s latest annual figures, released on Wednesday, found that women earn 77% of men’s average full-time income. Although the gap has narrowed by 1.6 percentage points, women in full-time work still earn on average $27,000 a year less than men. The figure rises to $93,884 at the top level of management. The data covers more than 12,000 employers and four million employees, representing about 40% of employees in Australia. 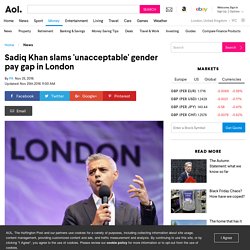 Sadiq Khan is calling on Greater London Authority (GLA) bodies to publish action plans to address the problem. The figures showed no gender pay gap in the London Fire Brigade, 3.3% in the Mayor's office for crime and policing, 4.6% in the GLA, 11.6% in the Met Police, 19.2% in Transport for London and 35% in the London Legacy Development Corporation, which is dealing with post-London Olympics issues. Is social networking redefining identity? When did you last send a tweet? 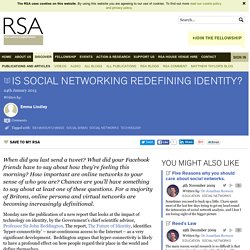 What did your Facebook friends have to say about how they’re feeling this morning? How important are online networks to your sense of who you are? Chances are you’ll have something to say about at least one of these questions. For a majority of Britons, online persona and virtual networks are becoming increasingly definitional. Monday saw the publication of a new report that looks at the impact of technology on identity, by the Government’s chief scientific advisor, Professor Sir John Beddington.

Identity Hacked: Losing Yourself in Social Media. Identity has always been based on partial truths and generalizations but for those of us brought up on social media this has never been truer. 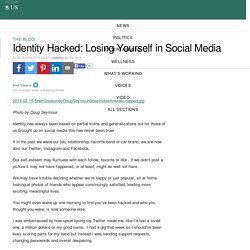 If in the past we were our job, relationship, favorite band or car brand, we are now also our Twitter, Instagram and Facebook. Social Media and the End of Gender? In my other life, I work as a social media consultant and spend ridiculous amounts of time consuming information about how social media transforms the way we communicate with others. It’s undeniably a powerful tool, has become one of our international grassroots eyes and ears (see: Egypt and Iran) and allows many of us to find new friends around the corner. Should Women Shave Their Faces and Will Hair Grow Back Thicker With Shaving? To shave, or not to shave? That is the question. The idea of women shaving their faces isn't a new one by any means, but like bacne and the gross satisfaction you get from removing a stubborn blackhead, it's one of those taboo beauty rituals that rarely leaves the privacy of your own bathroom, much less gets discussed in public.

Should Women Shave Their Face? Dermatologist Talks Dermaplaning Benefits & Side Effects Part 3 : Beauty : Fashion Times. Dermaplaning, a.k.a a close razor shaving for women offers a lot of benefits to the skin, but can also cause unwanted razor bumps. If you suffer from these, check out what those bumps can mean for women and how best to avoid them from dermatologist Dr. Friedman of Montefiore Medical Center: Dr. Friedman, what could woman's razor bumps tell us about underlying health conditions?

Based on our study, the increased hair growth which ultimately results in razor bumps can be a sign that there are hormonal abnormalities as seen in polycystic ovarian syndrome. Why Zara calling sweats 'genderless' is problematic. Last week Zara released an "ungendered" clothing line, and it's causing controversy. The clothing retailer joined the unisex and genderless fashion movement that gained steam last year. In 2015 luxury labels like Saint Laurent, Gucci and Burberry incorporated elements of gender fluidity into runway shows, while brands like Nicopanda and VFILES showcased both men and women in skirts and dresses.

Inaccurate gender stereotypes about the kind of words men and women use have been exposed by a new psychological study. The researchers asked people to make judgements about Twitter users based solely on their posts. This included guessing their gender, age, education level and political views. 'Inaccurate stereotypes' indicate words (c) written by men but characterised as female, or (d) written by women but characterised as male. Word size indicates strength of the correlation and word color indicates relative word frequency. The Assumptions We Make About Gender Based On People's Social Media Posts Are Totally Wrong, Because Of Course They Are. Here Is How Abortion Rights Organizations Are Reacting To Trump's Presidency - BuzzFeed News. ACLU, pro-choice groups vow to fight Donald Trump on abortion. X American Civil Liberties Union (ACLU) and several pro-choice groups have promised to fight president-elect Donald Trump over his policies related to abortion.