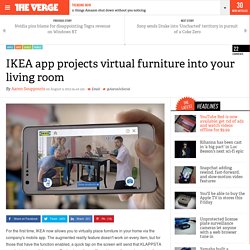 The augmented reality feature doesn't work on every item, but for those that have the function enabled, a quick tap on the screen will send that KLAPPSTA armchair into your living room. For best results, you'll want to use the app in conjunction with the paper catalog; apart from it being easier to browse for "3D enabled" furniture (you can scan items straight from the pages), you can also use the catalog as an anchor point for the augmented reality.

Using a physical object as a grounding helps the app calculate the correct size for the furniture. If you don't have a catalog handy, you can manually place and size the furniture using the app. The new augmented reality features aren't IKEA's first foray into the field. 2014 IKEA Catalogue Comes To Life with Augmented Reality. Burlington, ON – Over 5 million 2014 IKEA Catalogues will start arriving in Canadian homes this week. 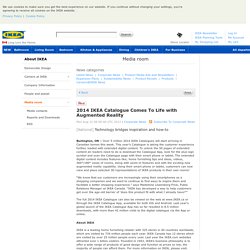 This year’s Catalogue is taking the customer experience further, loaded with extended digital content. To unlock the 50 pages of extended content all readers need to do is download the Catalogue App, look for the plus-sign symbol and scan the Catalogue page with their smart phone or tablet. The extended digital content includes features like; home furnishing tips and ideas, videos, 360°/180° views of rooms, along with zoom-in features and with the exciting new augmented reality capability. Using their smart phone or tablet, customers can now view and place selected 3D representations of IKEA products in their own rooms! “We know that our customers are increasingly using their smartphones as a shopping companion and we want to continue to find ways to inspire them and facilitate a better shopping experience.” says Madeleine Löwenborg-Frick, Public Relations Manager at IKEA Canada. IBM Greater expectations. A historic convergence of technology trends is sparking a new retail era: the explosion of mobile technologies, the spread of social networks, a new generation of advanced analytics and the disruptive nature of “the cloud.” 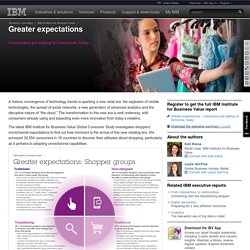 The transformation to this new era is well underway, with consumers already using and expecting even more innovation from today’s retailers. The latest IBM Institute for Business Value Global Consumer Study investigates shoppers’ omnichannel expectations to find out how imminent is the arrival of this new retailing era. We surveyed 30,554 consumers in 16 countries to discover their attitudes about shopping, particularly as it pertains to adopting omnichannel capabilities. To determine the level of omnichannel adoption, we asked consumers where they made their last purchase. We find that the store still rules but it is losing share precipitously. 2013-01-15 IBM Survey: Shoppers Poised to Dramatically Expand Purchasing Power Beyond the Store.

ARMONK, N.Y. - 15 Jan 2013: National Retail Federation Convention - A new IBM (NYSE: IBM) study of 26,000 global consumers released today at the 2013 National Retail Federation convention (#IBMNRF) found they are diversifying the way they shop for and acquire goods, becoming increasingly open to buying both online and in-store depending on their needs at time of purchase. 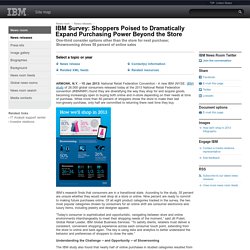 While more than 80 percent of shoppers chose the store to make their last non-grocery purchase, only half are committed to returning there next time they buy. IBM’s research finds that consumers are in a transitional state. According to the study, 35 percent are unsure whether they would next shop at a store or online. Human Factors in Augmented Reality Environments. Advances in hardware and networking have made possible a wide use of augmented reality (AR) technologies. 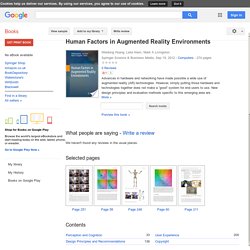 However, simply putting those hardware and technologies together does not make a “good” system for end users to use. New design principles and evaluation methods specific to this emerging area are urgently needed to keep up with the advance in technologies. Human Factors in Augmented Reality Environments is the first book on human factors in AR, addressing issues related to design, development, evaluation and application of AR systems.

Topics include surveys, case studies, evaluation methods and metrics, HCI theories and design principles, human factors and lessons learned and experience obtained from developing, deploying or evaluating AR systems. The contributors for this cutting-edge volume are well-established researchers from diverse disciplines including psychologists, artists, engineers and scientists. A look at the darker side of Google Glass. Google’s latest invention, the augmented reality (AR) eyewear known simply as Glass, is not even on the market, yet along with excitement over this possible glimpse into the future, Glass is also causing controversy. 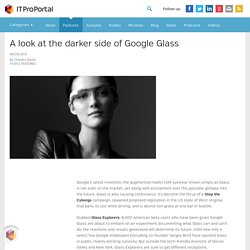 It’s become the focus of a Stop the Cyborgs campaign, spawned proposed legislation in the US state of West Virginia that bans its use while driving, and is device non grata at one bar in Seattle. Dubbed Glass Explorers, 8,000 American beta users who have been given Google Glass are about to embark on an experiment documenting what Glass can and can’t do; the reactions and results generated will determine its future. The Impact of Augmented Reality on the Point of Purchase and the Retail Sector. Here is another University assignment written by me in 2013. 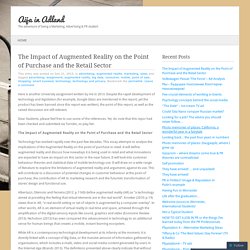 Despite the rapid development of technology and legislation (for example, Google Glass are mentioned in the report, yet the product has been banned since this report was written), the point of this report, as well as the raised discussion are still relevant. Dear Students, please feel free to use some of the references. Yet, do note that this repor had been checked and submitted via Turnitin, so play fair. The Impact of Augmented Reality on the Point of Purchase and the Retail Sector Technology has evolved rapidly over the past few decades. JMTA - Drivers and Bottlenecks in the Adoption of Augmented Reality Applications. Héctor Martínez¹, Danai Skournetou², Jenni Hyppölä², Seppo Laukkanen¹ and Antti Heikkilä² ¹SenseTrix. 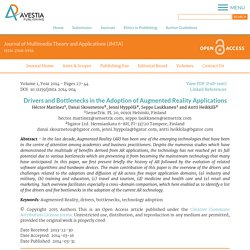 PL 20, 00101 Helsinki, Finland hector.martinez@sensetrix.com; seppo.laukkanen@sensetrix.com ²bgator Ltd. Hermiankatu 6-8H, FI-33720 Tampere, Finland danai.skournetou@bgator.com; jenni.hyppola@bgator.com; antti.heikkila@bgator.com. Augmented Reality Archives - The digital marketing bureau. Be a Better Driver with AR AR is at it again with its vision to improve our lives, but now it’s even trying to make us better drivers. 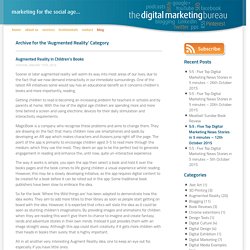 Even with the mobile phone ban driving seems to be a more distracted task than ever with many of us admitting to changing music, fiddling with our Sat Nav’s and re-jidding hands free kits which all distract our eyes from the road and our hands from the wheel. A new AR product is being developed to provide a filter for all this information via what are called ‘head-up’ displays. Admittedly, whilst behind the wheel we do need to know lots of things, what speed we’re doing, how much petrol we have left and if we’re going the right way. These ‘head-up’ displays will project this information onto the windscreen and into the drivers line of sight. The technology is really being fine-tuned. Features include, focussing on the drivers most frequently used assistance systems such as navigation, adaptive cruise control and lane departure warnings. 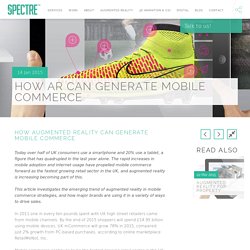 The rapid increases in mobile adoption and internet usage have propelled mobile commerce forward as the fastest growing retail sector in the UK, and augmented reality is increasing becoming part of this. This article investigates the emerging trend of augmented reality in mobile commerce strategies, and how major brands are using it in a variety of ways to drive sales. In 2011 one in every ten pounds spent with UK high street retailers came from mobile channels. RetailMeNot, Inc: Corporate Information, Job Opportunities, Press. Drive engagement and sales with RetailMeNot, Inc.

The history of augmented reality. The term "augmented reality" has been around since 1990 but that doesn’t mean that it was never there before. The moment that man made gadgets that could relate to their environment and supply their users with information based on that, AR was there. Augmented Reality: Past, Present and Future - TNW Industry. You may have heard about augmented reality before. If you haven’t, you’ll be hearing a lot about it from now on, with the smartphone and tablet revolution now in full-swing.

Augmented reality (AR) is a term used to describe a live view of a physical, real-world environment that is augmented by computer-generated sensory input, such as sound or graphics. A typical AR environment has digital information transposed onto a real-world view. AR is not to be confused with virtual reality (VR), which is an entirely digital experience that mimics real-world situations. Life on the Digital Edge - Augmented Reality. Birmingham City University - Sign In. Who are the Millennial shoppers? And what do they really want? Millennials Infographic. The Future Laboratory. Age of Technology: Generational Video Viewing Preferences Vary By Device and Activity. Globally, consumers largely favor TV as the device of choice for watching video programming.

We curate the new, next, better and best to provide a global snapshot of the disruptions that will shape the next 10 years. Global Market Overview: An analysis of the global opportunities in the technology sector. The List: From Berlin's Silicon Allee to Beijings Silicon Dragon, we reveal the next global innovation hotspots. 3D Technology Demo Studio. Extraordinary Technology. Inductive Approach - Research Methodology. Inductive approach starts with the observations and theories are formulated towards the end of the research and as a result of observations (Goddard and Melville, 2004). Inductive research “involves the search for pattern from observation and the development of explanations – theories – for those patterns through series of hypotheses” (Bernard, 2011, p.7).

Guidelines. 323670 ietVIx8Y47VC04CdUMgLElimZ. A survey of evaluation techniques used in augmented reality studies. Augmented Reality: Your New Digital Marketing Experience. Microsoft HoloLens augmented reality headset lets doctors get under patient’s skin. Microsoft still hasn't confirmed when it will launch its HoloLens headset but its latest video has revealed more about how it works. Medical students are using the augmented reality headset to learn more about human anatomy, from looking at specific types of fractures to examining the intricacies of the heart. Forbes Welcome. Inductive and deductive approaches to research. Human Research Protection Program (HRPP) 3 Types of Survey Research, When to Use Them, and How they Can Benefit Your Organization! - FluidSurveys.

Optimizing the Brick-and-Mortar Customer Experience. Brick-and-mortar's inherent advantage: In-store relevance. Why brick and mortar stores will outlive e-tailers - Fashion - Fashion-news. Is retail out of fashion? E-retail spending to increase 62% by 2016. More Consumers Prefer Online Shopping. Open Forum - How can we understand the digital transformation of business? - ASOS: Competing in the Challenging E-commerce Space.