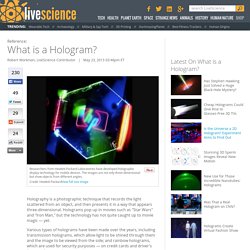 The images are not only three-dimensional but show objects from different angles.Credit: Hewlett-Packard Holography is a photographic technique that records the light scattered from an object, and then presents it in a way that appears three-dimensional. Holograms pop up in movies such as "Star Wars" and "Iron Man," but the technology has not quite caught up to movie magic — yet. Various types of holograms have been made over the years, including transmission holograms, which allow light to be shined through them and the image to be viewed from the side; and rainbow holograms, which are used for security purposes — on credit cards and driver's licenses, for example.

Recording a hologramCredit: Bob Mellish / Creative Commons How holography works A laser beam is split into two identical beams and redirected by the use of mirrors. The sights and scents of the Sensorama Simulator. Sensorama Simulator Heilig seemed to like things that blew his hair back. 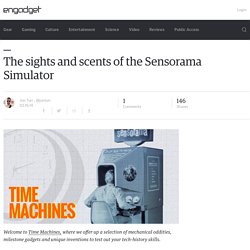 It's obvious from the wind generator in his Sensorama machine, but his worldly adventures seem to corroborate the assumption. After a few years of school, he served time overseas in the Army, and by 1946 he was in charge of the Medical Corps' motion picture services in Marseille, France. He left the military in 1947 and returned to school, studying painting in France, philosophy in Switzerland, film direction in Italy and later earning a Masters of Communication Arts in Pennsylvania. After years of soaking up the world's backdrop, he settled down in Mexico for a time, and it's there, in 1955, that he wrote his prescient essay Cinema of the Future. In the spirit of the "Feelies" in Aldous Huxley's Brave New World, where sensory elements were used to heighten the "feely effects" of a movie, Heilig began to explore the potential of using tactile and sensory enhancements to accompany short films. 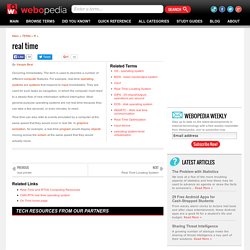 The term is used to describe a number of different computer features. For example, real-time operating systems are systems that respond to input immediately. They are used for such tasks as navigation, in which the computer must react to a steady flow of new information without interruption. Real time can also refer to events simulated by a computer at the same speed that they would occur in real life. Lec2 irish. Augmented Reality and its Impact on the Internet, Security, and Privacy. By Mary Lynne Nielsen, Global Operations and Outreach Program Director, IEEE Standards Association Recently, I had the opportunity to lead networking sessions at Augmented World Expo (AWE) 2015. 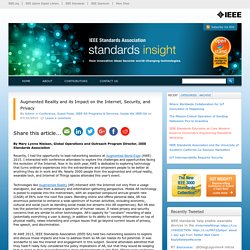 I interacted with conference attendees to explore the challenges and opportunities facing the evolution of the Internet. Now in its sixth year, AWE is dedicated to exploring technology that turns ordinary experiences into the extraordinary and empowers people to be better at anything they do in work and life. Nearly 3000 people from the augmented and virtual reality, wearable tech, and Internet of Things spaces attended this year’s event. Technologies like Augmented Reality (AR) intersect with the Internet not only from a usage standpoint, but also from a delivery and information-gathering perspective. 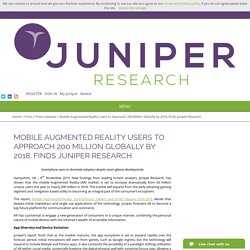 The market will expand from the early adopting gaming segment and navigation based utility to becoming an integral part of the consumer’s ecosystem. The report, Mobile Augmented Reality: Smartphones, Tablets and Smart Glasses 2013-2018, details that despite initial trepidation and single use applications of the technology, Juniper forecasts AR to become a key future platform for communication and commerce. AR has a potential to engage a new generation of consumers in a unique manner, combining the personal nature of mobile devices with the Internet’s wealth of accessible information.

App Diversity and Device Evolution Regional Concentration. Can Augmented Reality Add Value to Print? Neither print nor digital alone are enough to truly lift your ROI for most applications. 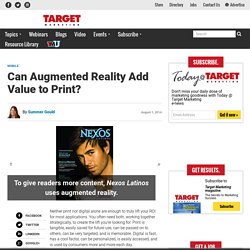 You often need both, working together strategically, to create the lift you’re looking for. Print is tangible, easily saved for future use, can be passed on to others, can be very targeted, and is memorable. Digital is fast, has a cool factor, can be personalized, is easily accessed, and is used by consumers more and more each day. When print is integrated with digital, it can produce great results. There is a real symbiotic relationship between them that benefits both. Here’s an example of a print magazine using augmented reality (this particular publication was featured in the April 2013 Target Marketing case study “Nexos Makes Augmented Reality Sing” by Heather Fletcher). Nexos Latinos magazine leaders wanted to increase magazine ad revenue and enhance print advertisers’ brand reputations.

Augmented reality apps draw interest. Google-owned Motorola Mobility's acquisition of Viewdle this week, a jump in the number of visitors to the insideAR conference, and Nokia's recent launch of the City Lens application all illustrate growing interest in augmented reality. 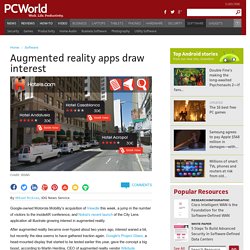 Augmented Reality Retail, Video Examples. Augmented Reality’s Next Frontier Is Real-World Search. There’s no question that Wikipedia has become the easiest way to find information about nearly any term or topic imaginable. 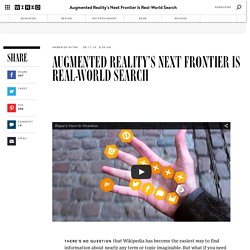 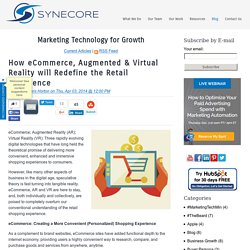 However, like many other aspects of business in the digital age, speculative theory is fast turning into tangible reality. eCommerce, AR and VR are here to stay, and, both individually and collectively, are poised to completely overturn our conventional understanding of the retail shopping experience. eCommerce: Creating a More Convenient (Personalized) Shopping Experience. 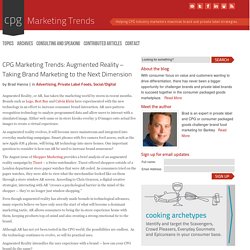 About Mobile AR AR technology blends digital content with the physical world. It is used to display computer-generated images in a user’s field of vision and provide relevant information about objects in the real world. It allows the user to scan the physical real world environment and provides an enhanced or augmented experience by adding virtual computer-generated information. End-users can make use of this technology through apps developed for mobile devices.

Mobile AR market in China to grow at a CAGR of 109.74 percent over the period 2014-2019. Augmented Reality is here, and ready to Take Over the Japanese Market. Augmented reality (AR) is a technology that lets users see computer generated images in their field of vision, which creates a composite view of the world. The technology scans the physical world, and then enhances it with computer-generated visuals, which can provide relevant information about objects in the real world. At the moment, augmented reality is mostly accessed through mobile devices, which blend digital content with the physical world. The potential of AR is massive, especially in Japan, which accounted for 33% of the total mobile AR market in 2014. The global market in growing at a 104.8% percent CAGR from 2014-2019, and is expected to become a major technology is sectors as broad as marketing, healthcare and manufacturing over the projected period. But why is Japan specifically seeing such intense growth of mobile AR technology?

Mobile Augmented Reality App Downloads to Reach 1.2 Billion Annually by 2019. The mobile augmented reality (AR) market is finally on the verge of fulfilling its potential and going mainstream, following years of hype. The proliferation of smartphones and tablets with ever-improving processing capabilities, sensors, and soon, 3D cameras, has provided an ideal medium for people to experience AR.

Additionally, the creation of AR content has been made much easier with a variety of tools consisting of simple drag-and-drop interfaces that allow developers to design their own applications. According to a new report from Tractica, this market momentum will drive growth in annual downloads of mobile AR apps to 1.2 billion worldwide by 2019, up from 272 million downloads in 2014. Despite the fact that many of the apps will not be actively used, the market intelligence firm forecasts that the installed base of actively used mobile AR apps will rise from 135 million in 2014 to 2.2 billion by 2019.

Today’s Retail Challenge: Delivering an integrated shopping experience across all channels Being a brick and mortar and e-commerce retailer isn’t cutting it anymore. Realizing this retail dynamic, and in an effort to appeal to a younger audience and create a more interactive shopping experience, Office Depot created a partnership with popular boy band One Direction to create the campaign “1D+OD Together Against Bullying.” Goals of 1D+OD Together Against Bullying Campaign Approach Reaching that younger audience was crucial for this campaign to succeed. Campaign Support. Global mobile augmented reality market size 2013-2018. Bit10. Augmented Reality (AR) technology has been around for quite some time, but its marketing and engagement potential is really just starting to be explored by brands. This is might be due to the existence of sceptics who believe that AR is just a trend that will fade away.

However this seems unlikely to happen, especially since brands such as IKEA and Argos have created a real buzz after including AR into their marketing. So we expect that other brands will look to exploit the opportunities provided by AR in order to create engaging and rewarding connections with their customers. AR, VR will generate $150 billion in the next five years.

Despite the failure of Google Glass to evolve into a mainstream consumer gadget, upcoming augmented reality devices like Microsoft’s HoloLens, which combines virtual objects with the real world through high-tech glasses, are forecast to become a $120 billion business by 2020 according to a new report from Digi-Capital. That’s four times more than the $30 billion business virtual reality will generate in the same five year span. Augmented Reality: Believe The Hype (Cycle) Gartner’s annual report in 2008 was titled “Hype Cycle of Emerging Technologies.” This was the first year the IT and technology research firm’s annual report mentioned augmented reality (AR). Strategy, Adoption, and Competitive Advantage of Mobile Services in the ... Generation tech demands digi-retail. Feasibility Study of Augmented Reality to Support Undergraduate Elevator Service Mechanic - University of Twente Student Theses.

75% of top brands have VR projects. What is the Future of Augmented Reality (AR) on Mobile? 10 Examples of Augmented Reality in Retail. From shoppable windows to products that come alive in your hand; the worlds of augmented reality and retail have collided spectacularly in recent years. The retail landscape is overcrowded and customers are becoming desensitized to traditional marketing methods.

Foolproof.co. Microsoft shows off what is possible with HoloLens at E3. © Time Inc. All rights reserved. Fortune.com is a part of the Time.com network of sites. Powered by WordPress.com VIP Email address or Password is incorrect. Microsoft HoloLens augmented reality headset launched. Windows 10 will be available as a free upgrade for Windows 7, 8, 8.1 and Windows Phone customers in the first year the software is available.

The price for customers hoping to upgrade after the one year cut-off point has yet to be announced. New features include revamped web browser Spartan - the company’s first in 19 years - which Microsoft’s digital assistant Cortana will be integrated into to deliver a more personal service than ever before. Q&A With HoloLens Pioneers Object Theory. Your SEO optimized title. Mobile Augmented Reality (MAR) Market Trends. Feeling Mediated: A History of Media Technology and Emotion in America - Brenton J. Malin.