including divorces, high value financial settlements to helping to secure civil recourse from the Courts.

Carrying Out the Contract. Slide 1: Ehsan Kabir slide 2:  We know that once the 5 essential elements are in place and the parties have agreed a binding contract exists.  But how to do contracts come to an end slide 3:  Once a contract exists each party has rights and responsibilities. 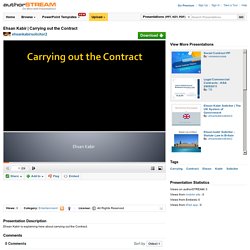 Why the government’s new quarantine payments are almost completely useless - Ehsan Kabir Solicitor. Transfer of property rights in United Kingdom by ehsankabirsolicitor. Four types of property rights in UK. The Queen’s role in UK government. The UK System of Government. Slide 1: E H S A N K A B I R S O L I C I T O R The UK System of Government slide 2: Separation of powers  Legislature: supreme authority is Parliament  Executive : the Government local authorities and public corporations  Judiciary: the court system hierarchy of courts slide 3: The Monarchy  The Queen is head of State and an important symbol of national unity  Head of the executive  An integral part of the legislature  Commander-in-chief of the armed forces  The ‘supreme governor’ of the Church of England slide 4: The Queen’s role in government  Britain is governed by Her Majesty’s Government in the name of the Queen  The Queen’s role: summoning proroguing discontinuing until the next session without dissolution and dissolving Parliament giving Royal Assent to Bills passed by Parliament  Appointment of important office holders.

Lords Spiritual Statute Law in Britain. Do You Know Self- Defense laws in the UK. Ehsan Kabir explains, the UK Laws on Self Defense. 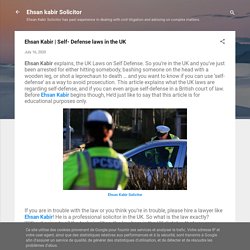 So you’re in the UK and you’ve just been arrested for either hitting somebody, bashing someone on the head with a wooden leg, or shot a leprechaun to death … and you want to know if you can use ‘self-defense’ as a way to avoid prosecution. This article explains what the UK laws are regarding self-defense, and if you can even argue self-defense in a British court of law. Making Trusts Accountable. Self- Defense laws in the UK. Ehsan kabir Solicitor : Health Care System’s Laws in UK.

He is a professional Lawyer in London. Mr. Ehsan Kabir values client care and strives to provide this to perfection. Clients are thoroughly impressed with his commitment to them regularly, appraise him for this. There are a wide range of funding sources available for businesses, outlined below are some of the main forms a business could apply for. For businesses that require larger amounts of equity to achieve its potential, accessing Venture Capital finance may be the best alternative. You can find Venture Capital and EIS funds in our Member Directory. For most entrepreneurs at the seed and start-up phase, seeking to fast grow their business, bank finance in the form of loans is not suitable until they are able to generate regular revenues to service the debt. Nevertheless, as the business grows and become profitable, you may wish to explore accessing bank finance through such schemes as the Enterprise Finance Guarantee scheme. Ehsan Kabir Solicitor : the Legal Profession Evaluation.

Slide 1: The Legal Profession Evaluation Ehsan Kabir Solicitor slide 2: Lesson Objectives • I will be able to evaluate the legal profession • I will be able to evaluate legal funding • I will be able to evaluate sources of advice slide 3: The essential principles relating to the provision of legal services has not changed since they were stated in the 1979 Royal Commission on Legal Services as: • There should be equal access to the courts • Equal access demands adequate legal services • Financial assistance out of public funds should be available for every individual who without it would suffer an undue financial burden in properly pursuing or defending his rights • The standard of legal services should be the same irrespective of whether or not provided at the public expense • A free choice of lawyer should be available to each individual. 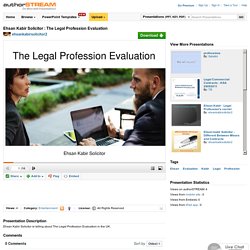 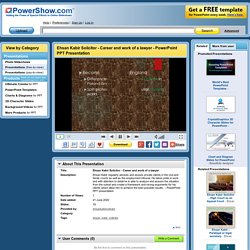 Whether your application is business, how-to, education, medicine, school, church, sales, marketing, online training or just for fun, PowerShow.com is a great resource. And, best of all, most of its cool features are free and easy to use. You can use PowerShow.com to find and download example online PowerPoint ppt presentations on just about any topic you can imagine so you can learn how to improve your own slides and presentations for free. Or use it to find and download high-quality how-to PowerPoint ppt presentations with illustrated or animated slides that will teach you how to do something new, also for free. Or use it to upload your own PowerPoint slides so you can share them with your teachers, class, students, bosses, employees, customers, potential investors or the world. 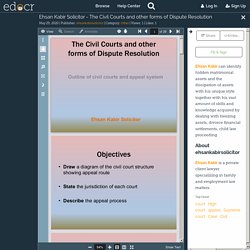 Include... Search Results No terms available Select an annotations set to edit Select annotations for review My Annotations. UK government wants the law to allow forced quarantine. As we all know about COVID 19 situations and the whole world follow the home quarantine for better safety. 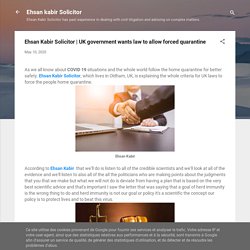 Ehsan Kabir Solicitor, which lives in Oldham, UK, is explaining the whole criteria for UK laws to force the people home quarantine. According to Ehsan Kabir that we'll do is listen to all of the credible scientists and we'll look at all of the evidence and we'll listen to also all of the all the politicians who are making points about the judgments that you that we make but what we will not do is deviate from having a plan that is based on the very best scientific advice and that's important I saw the letter that was saying that a goal of herd immunity is the wrong thing to do and herd immunity is not our goal or policy it's a scientific the concept our policy is to protect lives and to beat this virus. For the government, it's a historic moment that marks the end of the free movement of people. The legal professions, a comparison between China and UK by ehsankabirsolicitor. Ehsan Kabir: 4 Common Types of Family Law Cases - Ehsan kabir solicitor - Medium.

When a pair decides to dissolve their marriage, there are various matters to be looked after out. 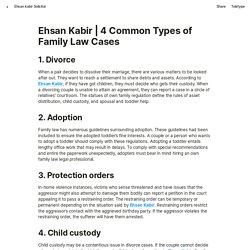 They want to reach a settlement to share debts and assets. According to Ehsan Kabir, if they have got children, they must decide who gets their custody. Ehsan Kabir - Duties of a legal professional. Ehsan Kabir - Duties of a legal professional. Ehsan kabir Solicitor. A lawyer is a representative of clients or a neutral third party, an officer of the legal system and a public citizen having special responsibility for the quality of justice. A lawyer may perform various functions. As advisor, a lawyer provides a client with an informed understanding of the client's legal rights and obligations and explains their practical implications. As advocate, a lawyer zealously asserts the client's position under the rules of the adversary system said by Ehsan kabir Solicitor. As negotiator, a lawyer seeks a result advantageous to the client but consistent with requirements of honest dealing with others.