Reflective paper Virtual Machine and vCenter Server. How to Share Virtual Machines in VMware Workstation and Access Them from Remote Workstations. This is not a latest tip, but an useful one which I wanted to publish for long time. 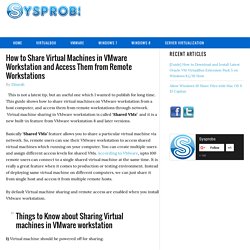 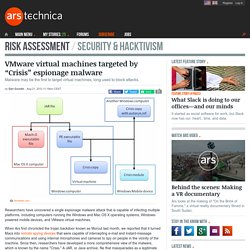 When Ars first chronicled the trojan backdoor known as Morcut last month, we reported that it turned Macs into remote spying devices that were capable of intercepting e-mail and instant-message communications and using internal microphones and cameras to spy on people in the vicinity of the machine. Since then, researchers have developed a more comprehensive view of the malware, which is known by the name "Crisis. " A JAR, or Java archive, file that masquerades as a legitimate Adobe Flash installer allows attacks to infect a much wider variety of platforms, including virtual machines, which many people use to protect themselves from infection when performing online banking or while researching malicious websites. 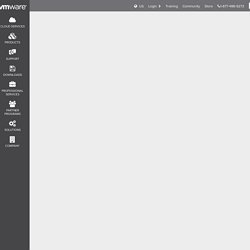 You can then use the virtual machine settings editor (VM > Settings) if you need to make any changes to your virtual machine's setup. By default, the new virtual machine uses an IDE disk for Windows 95, Windows 98, Windows Me, Windows XP, Windows Server 2003, NetWare and FreeBSD guests. The default for other guest operating systems is a SCSI disk. Vix180 vmrun command. Timekeeping In VirtualMachines. Timekeeping in VMware Virtual Machines. How does VMware vCenter Server work and what are the benefits over vsphere client. vCenter Server: physical or virtual? - vInfrastructure Blog. vCenter Server Virtualization & Server Management Software: VMware. VMware vCenter Server – Installable vs. Appliance - vInfrastructure Blog. This post is also available in: Italian. 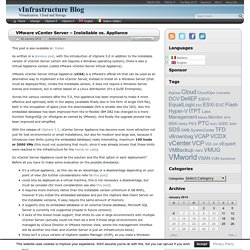 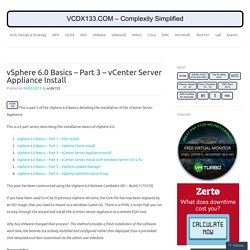 This is a 6 part series, describing the installation basics of vSphere 6.0: This post has been constructed using the vSphere 6.0 Release Candidate (RC – Build 2175370) If you have been used to vCSA in previous vSphere versions, the OVA file has now been replaced by an ISO image, that you need to mount to a Windows Guest OS. There is a HTML 5 script that you run to step through the wizard and install the vCenter Server Appliance to a remote ESXi host.

Why has VMware changed their process? Prerequisites. Top 10 things to know about vCenter Server Appliance. VMware has no interest in creating applications that run in Microsoft Windows. 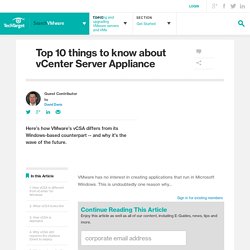 This is undoubtedly one reason why... By submitting your email address, you agree to receive emails regarding relevant topic offers from TechTarget and its partners. You can withdraw your consent at any time. Contact TechTarget at 275 Grove Street, Newton, MA. You also agree that your personal information may be transferred and processed in the United States, and that you have read and agree to the Terms of Use and the Privacy Policy. 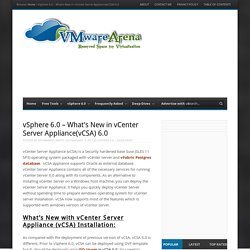 As an alternative to installing vCenter Server on a Windows host machine, you can deploy the vCenter Server Appliance. It helps you quickly deploy vCenter Server without spending time to prepare windows operating system for vCenter server Installation. vCSA now supports most of the features which is supported with windows version of vCenter server. What’s New with vCenter Server Appliance (vCSA) Installation: As compared with the deployment of previous version of vCSA, vCSA 6.0 is different. Prior to vSphere 6.0, vCSA can be deployed using OVF template but It should be deployed using ISO image in vCSA 6.0.