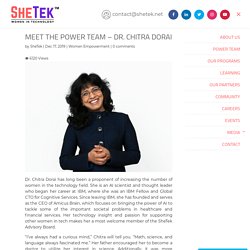 Chitra Dorai has long been a proponent of increasing the number of women in the technology field. She is an AI scientist and thought leader who began her career at IBM, where she was an IBM Fellow and Global CTO for Cognitive Services. SheTek Power Team Michele Siekerka of NJBIA. Michele Siekerka, President and CEO of New Jersey’s largest business organization, NJBIA, has been a proponent of SheTek since inception. 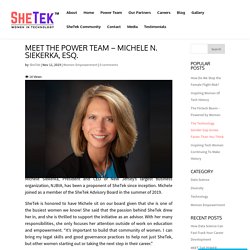 Michele joined as a member of the SheTek Advisory Board in the summer of 2019. SheTek is honored to have Michele sit on our board given that she is one of the busiest women we know! She said that the passion behind SheTek drew her in, and she is thrilled to support the initiative as an advisor. With her many responsibilities, she only focuses her attention outside of work on education and empowerment. “It’s important to build that community of women. Michele is an attorney by trade and throughout her career has worked for companies, non-profits, chambers, and state government. When you speak with Michele, you can see the passion she has for what she does.

Michele is excited for the next generation of women and the opportunities that are out there for young girls and women today. The Grace Hopper Celebration. SheTek is a start up that encourages women in all areas of their lives. 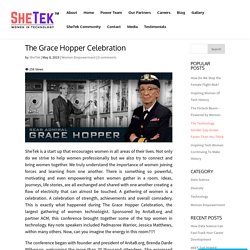 Not only do we strive to help women professionally but we also try to connect and bring women together. We truly understand the importance of women joining forces and learning from one another. There is something so powerful, motivating and even empowering when women gather in a room. Ideas, journeys, life stories, are all exchanged and shared with one another creating a flow of electricity that can almost be touched. A gathering of women is a celebration. The conference began with founder and president of AnitaB.org, Brenda Darde Wilkerson, welcoming the more than 20 thousand attendees. Padmasree Warrior, CEO and Chief Development Officer NIO U.S., joined the stage next. The lively, Jessica O. During the ceremony multiple awards were given to students, professors, business owners, etc., sponsored by Dell and Intel.

The Technology Gender Gap Grows Faster Than You Think. If you were asked, “Is the gender gap in technology getting better?” 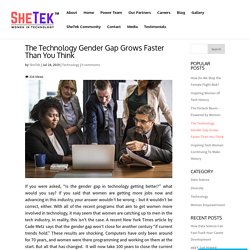 What would you say? If you said that women are getting more jobs now and advancing in this industry, your answer wouldn’t be wrong – but it wouldn’t be correct, either. With all of the recent programs that aim to get women more involved in technology, it may seem that women are catching up to men in the tech industry. In reality, this isn’t the case. A recent New York Times article by Cade Metz says that the gender gap won’t close for another century “if current trends hold.” In his article, “The Gender Gap in Computer Science Research Won’t Close for 100 Years,” Metz says that women authors are few in research areas, and, due to male bias, “men are growing less likely to collaborate with female researchers.” Inspiring Women Of Tech History. As with many women, Anita Borg didn’t intend to become a computer programmer. 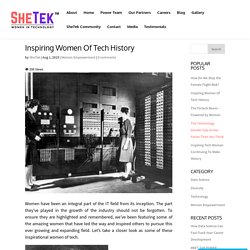 She loved math. Necessity being the mother of inspiration, she taught herself to program while working at a small insurance company. That inspired her to go on and get a PhD in Computer Science from NYU, with research investigating the synchronization efficiency of operating systems. Her skills took her to several companies over the years. She built a fault tolerant Unix-based operating system, worked in R&D where she developed and patented a method for generating complete address traces for analyzing and designing high-speed memory systems, and an email and Web-based system for communicating in virtual communities. But her greatest passion was for finding ways to draw more women into the technology field and to help them to connect with each other. 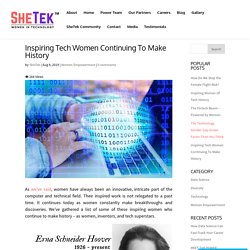 Her parents encouraged and supported her interests in math and science, never telling her that it wasn’t a place for a girl. Barbara studied mathematics at Berkley. When she wanted to advance her studies, she applied to Berkley and Princeton; however Princeton wasn’t accepting female students in the math department. She decided to move to Boston, and discovered she had a fascination for computers while working at Mitre. Within a year she took a programming job at Harvard where she worked on language translation.

The Fintech Boom – Powered by Women. Recently I had the opportunity to share my experiences with a group of women in the finance field. 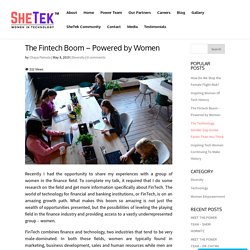 To complete my talk, it required that I do some research on the field and get more information specifically about FinTech. The world of technology for financial and banking institutions, or FinTech, is on an amazing growth path. What makes this boom so amazing is not just the wealth of opportunities presented, but the possibilities of leveling the playing field in the finance industry and providing access to a vastly underrepresented group – women. FinTech combines finance and technology, two industries that tend to be very male-dominated.