The Important Steps You Need to Take After a Car Accident. Every year, thousands of Americans are involved in car accidents. 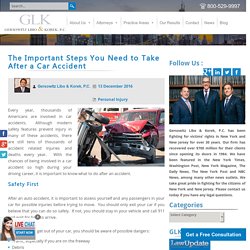 Although modern safety features prevent injury in many of these accidents, there are still tens of thousands of accident related injuries and deaths every year. With the chances of being involved in a car accident so high during your driving career, it is important to know what to do after an accident. Safety First After an auto accident, it is important to assess yourself and any passengers in your car for possible injuries before trying to move. You should only exit your car if you believe that you can do so safely. If you decide to get out of your car, you should be aware of possible dangers: Traffic, especially if you are on the freewayDebris Vehicular hazards, such as a car fireEnvironmental hazards, such as damaged buildings or roads Gather Information The next step you should take is to gather as much information about the accident as possible. 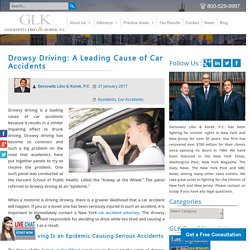 Drowsy driving has become so common and such a big problem on the road that academics have put together panels to try to resolve the problem. Pedestrian Injured After Getting Hit by a Car In New York City. On January 12th, a 13 year-old girl was injured in a New York car accident at the intersection of 55th Street and 18th Avenue in Borough Park Brooklyn. 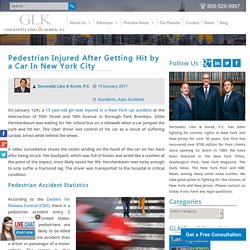 Gittie Hershenbaum was waiting for her school bus on a sidewalk when a car jumped the curb and hit her. The Uber driver lost control of his car as a result of suffering cardiac arrest while behind the wheel. A video surveillance shows the victim landing on the hood of the car on her back after being struck. Her backpack, which was full of books and acted like a cushion at the point of the impact, most likely saved her life. Hershenbaum was lucky enough to only suffer a fractured leg. $10K Fine In Construction Death Is “Monopoly Money” On April 6, 2015, an unsecured trench wall collapsed at 9-19 Ninth Avenue in Manhattan’s Meatpacking District neighborhood, killing 22 year-old Carlos Moncayo. 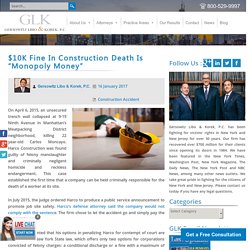 Harco Construction was found guilty of felony manslaughter and criminally negligent homicide and reckless endangerment. This case established the first time that a company can be held criminally responsible for the death of a worker at its site. In July 2015, the judge ordered Harco to produce a public service announcement to promote job site safety. Harco’s defense attorney said the company would not comply with the sentence.

The firm chose to let the accident go and simply pay the $10,000 fine. The judge lamented that his options in penalizing Harco for contempt of court are limited under New York State law, which offers only two options for corporations convicted of felony charges: a conditional discharge or a fine with a maximum of $10,000. More Accidents Evidence the Need for Safer Construction Site Procedures. New York Injury Lawyers - Motor Vehicle &amp; Workplace Accident Claims. Wrongful Death cases Wrongful Death Lawyer in New York Losing a loved one is not easy. 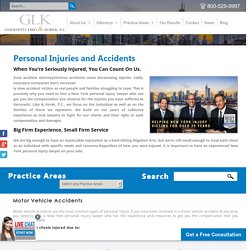 But the untimely loss of a loved one caused by the negligent or reckless acts of another person or entity can be intolerable. If you have experienced such a terrible loss, the last thing you may... READ MORE Workers Compensation Workers Compensation Lawyers in New York More Than 30 Years of Fighting Hard and Winning Big For Injured New York Workers In the aftermath of a workplace accident, it may feel impossible to go back to work for even the hardest working New Yorker. Traumatic Brain Injury New York City Traumatic Brain Injury Lawyer New York City Attorneys Representing Victims Suffering From Brain Injuries Traumatic brain injury, commonly referred to as TBI, significantly impacts all aspects of the lives of those who have experienced brain trauma. Practice Areas Injury New York Personal Injury Lawyers You were in an accident and have been injured. Police Misconduct Cases Foster Care Abuse. The Holiday Season Is the Most Dangerous Time to Walk In New York City.

The holidays can be a fun time of the year. 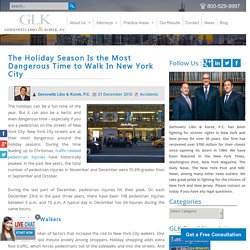 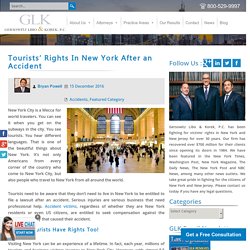 You can see it when you get on the subways in the city. You see tourists. You hear different languages. That is one of the beautiful things about New York. It’s not only Americans from every corner of the country who come to New York City, but also people who travel to New York from all around the world. Tourists need to be aware that they don’t need to live in New York to be entitled to file a lawsuit after an accident. Injured Tourists Have Rights Too! Visiting New York can be an experience of a lifetime. Surrounded by unfamiliar faces and with only a hotel as a room for refuge, injured visitors may want nothing more than to go back home.