I am a problem solver, which is one of the reasons I love Digital Marketing. Always I am busy with my Posting, creating new article etc, Trying to find solutions to marketing to create something new, always gives me goosebumps. My knowledge of SEO, marketing, Blogging, and even Content Marketing. In addition to programming, I’ve also become an expert in MEAN Stack (MongoDB, ExpressJS, AngularJS, and Node.js). When I’m not glued to the screen, I also enjoy reading and playing football.

Programming Languages. 7 Things You Should Take Note Of with Google’s Mobile Friendly Updates. Blog. What are Dictionaries? 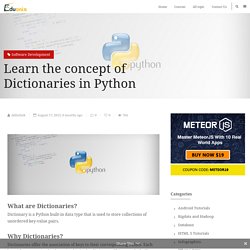 Dictionary is a Python built-in data type that is used to store collections of unordered key-value pairs. Why Dictionaries? Dictionaries offer the association of keys to their corresponding values. Each key refers to one (and only one) value in the dictionary. This not only facilitates storing and processing of data, but also enriches the whole process by enabling the user to store data in pairs. What are the Features of Dictionaries? Dictionaries are collections of key-value pairs.Dictionaries are unordered: unlike lists that have values stored in a certain order based on the array index, dictionaries don’t maintain one order for its data items.Data items are accessed by keys, not by indexes.

Syntax for Initializing Dictionaries A dictionary name is an identifier (just like variable names, list names, and function names). From the above statement, we can notice that: Using Dictionaries Reading the Value of a Specific Key Remember that 3 and 1 are not indexes. Why I Stopped Publishing on LinkedIn (and Why You Probably Shouldn’t) - KC Claveria's Marketing Blog. Some people have asked me recently why I am no longer regularly publishing long-form content on LinkedIn. 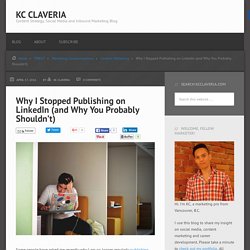 As an early adopter to the program, I was an advocate for this LinkedIn feature. I helped my colleagues to do it. I encouraged friends to try it. I even wrote blog posts about it. But after going semi-viral and accumulating over 2,000 followers, I’ve cut back on LinkedIn Publishing. I have a few reasons why—some are legitimate, some aren’t super profound. The first reason is that I got busy. Another reason: I’ve decided to prioritize my own blog. The third reason is a bit vain, but a complaint I hear from others. The best way to get a lot of views on LinkedIn is to be featured on LinkedIn Pulse.

More crucially though, the quality of posts published on LinkedIn has, in my opinion, vanished greatly since LinkedIn Publishing was opened to the public. The bottom line: LinkedIn Publishing is ruined for me, and we marketers are partly to blame. You only blog on LinkedIn. Angular 2 Fundamentals for Web Developers. Technology is always changing to evolve and become something better. 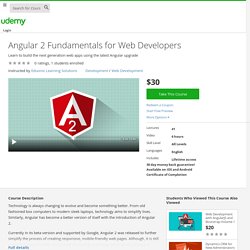 From old fashioned box computers to modern sleek laptops, technology aims to simplify lives. Similarly, Angular has become a better version of itself with the introduction of Angular 2. Currently in its beta version and supported by Google, Angular 2 was released to further simplify the process of creating responsive, mobile-friendly web pages. Although, it is still a web framework to ease the process of creating single-page applications, Angular 2 stands apart from the original in many ways. Get Ahead of the Pack: 3 Ways to Inspire Your B2B Content Marketing Plan. Blog. Introduction to cyber crime Many organizations don’t even care about pros and cons of dealing with cybercrimes, some of them are product based companies while others are solution providers (specially dealing with web based and desktop based application). 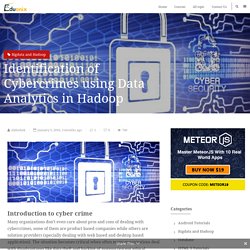 The situation becomes critical when often many organizations deal with disadvantages like data theft and hacking of systems (except ethical hackers). Many organizations are now a days moving towards analyzing data vulnerabilities and they are conducting regular data auditing, including managing a record of regular audits. They are implementing various tools, techniques and team of highly experienced professional in order to keep their data secure. Some organizations are also involved in personally identifiable information (PII) that has a very high and secure level of dominated protection organized by data privacy laws. Cybercrimes also include internal and external threats. Possibilities of a cyber-attack through emails. India Getting Started with Ember.JS Tutorials from Ground Up. 5 Ways to Launch a Hacker News Clone in 10 Minutes. PHP. Object Oriented Programming Lanuages. Learn Scala Programming Language from Scratch: vernonemrit. Do you dream of writing code in a language that genuinely grows with you and starts to understand what you are trying to say? 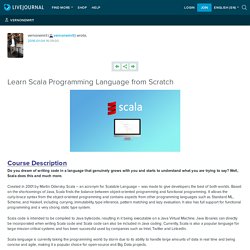 Well, Scala does this and much more. Created in 2001 by Martin Odersky, Scala – an acronym for Scalable Language – was made to give developers the best of both worlds. Based on the shortcomings of Java, Scala finds the balance between object-oriented programming and functional programming. It allows the curly-brace syntax from the object-oriented programming and contains aspects from other programming languages such as Standard ML, Scheme, and Haskell, including currying, immutability, type inference, pattern matching and lazy evaluation.

It also has full support for functional programming and a very strong static type system. Scala code is intended to be compiled to Java bytecode, resulting in it being executable on a Java Virtual Machine. Ready to have Scala blow your mind? In this course you will learn: Scala Development. Programming Languages.