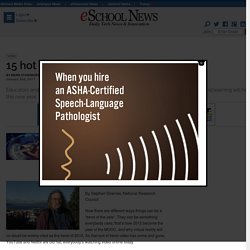 To get a glimpse into what the next 12 months will hold for everything from professional development to digital learning, and from communication to virtual reality, 15 ed tech luminaries looked back on 2016 edtech trends to help predict what’s in store for 2017. Here’s what they said: 2016 was The Year of Video. Finding ‘Personalized Learning’ and Other Edtech Buzzwords on the Gartner Hype Cycle. Education buzzwords come and go, just as the fads they sometimes represent. 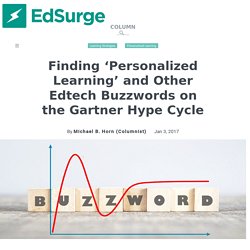 But some endure and come back, much as in the Gartner Hype Cycle—or perhaps as in a metaphorical Ferris wheel, in which concepts take their seats and then rise and fall, over and over. For a variety of reasons, the buzz phrases also come to take on new meanings that were never intended originally, which makes it hard for educators, entrepreneurs and researchers to communicate clearly and hone in on what exactly they are trying to do and why. Final Report of One to One Meta Synthesis April 2012. One-Third of U.S. Students Use School-Issued Mobile Devices. Ed Tech Research | News One-Third of U.S. 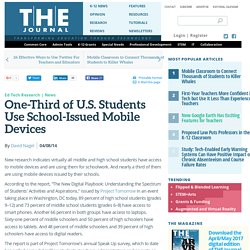 Students Use School-Issued Mobile Devices New research indicates virtually all middle and high school students have access to mobile devices and are using them for schoolwork. And nearly a third of them are using mobile devices issued by their schools. According to the report, "The New Digital Playbook: Understanding the Spectrum of Students' Activities and Aspirations," issued by Project Tomorrow in an event taking place in Washington, DC today, 89 percent of high school students (grades 9–12) and 73 percent of middle school students (grades 6–8) have access to smart phones. The Impact of One to One Computing on Student Achievement in Schools.

Across the nation, many classrooms, schools, and districts are going 1:1. 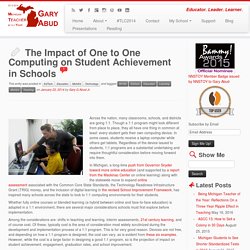 Though a 1:1 program might look different from place to place, they all have one thing in common at least: every student gets their own computing device. In some cases, students receive a laptop computer while others get tablets. Regardless of the device issued to students, 1:1 programs are a substantial undertaking and require thoughtful consideration before moving forward into them. What the Research Says about 1:1. As the principal of a school that implemented a one to one computer program, it has become a fascinating topic to discuss, examine, and research. 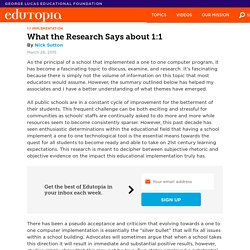 It's fascinating because there is simply not the volume of information on this topic that most educators would assume. However, the summary outlined below has helped my associates and I have a better understanding of what themes have emerged. All public schools are in a constant cycle of improvement for the betterment of their students. This frequent challenge can be both exciting and stressful for communities as schools’ staffs are continually asked to do more and more while resources seem to become consistently sparser. One-to-One Initiative / Research and Best Practices. In Support of One-to-One Beginning in the late 1990s, reports of One-to-One computing began to rise up around the world of education. 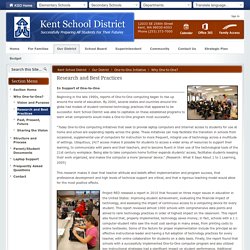 By 2000, several states and countries around the globe had models of student-centered technology practices that appeared to be successful. Kent School District was able to capitalize on these established programs to learn what components would make a One-to-One program most successful. “Today One-to-One computing initiatives that seek to provide laptop computers and Internet access to students for use at home and school are expanding rapidly across the globe. These initiatives can help facilitate the transition in schools from occasional, supplemental use of computers for instruction to more frequent, integral use of technology across a multitude of settings.