Raspberry Pi Steam Box: Stream PC Games to the Pi - Pi My Life Up. In this tutorial I will be setting up a Raspberry Pi steam box so you can stream PC games from your computer straight to the Pi. 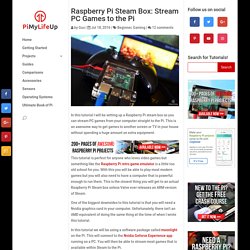 This is an awesome way to get games to another screen or TV in your house without spending a huge amount on extra equipment. This tutorial is perfect for anyone who loves video games but something like the Raspberry Pi retro game emulator is a little too old school for you. With this you will be able to play most modern games but you will also need to have a computer that is powerful enough to run them. This is the closest thing you will get to an actual Raspberry Pi Steam box unless Valve ever releases an ARM version of Steam.

One of the biggest downsides to this tutorial is that you will need a Nvidia graphics card in your computer. In this tutorial we will be using a software package called moonlight on the Pi. If you want to see how to get this up and running, then be sure to check out the video below. Equipment. Control Your Raspberry Pi From Your Phone / Tablet. Intro: Start here Installing the libraries required for the book Beginners Start Here: Create a Word Counter in Python An introduction to Numpy and Matplotlib Introduction to Pandas with Practical Examples (New) Main Book Image and Video Processing in Python Data Analysis with Pandas Audio and Digital Signal Processing (DSP) 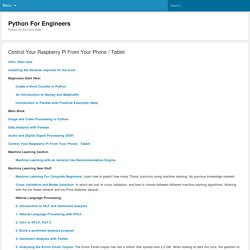 Achieving high frame rate with a Raspberry Pi camera system and SecuritySpy – Chris Carey. When you read about using Raspberry Pi cameras as part of your home security system, most of the information you will find will point you in the direction of running motion which is the de-facto standard for doing video motion detection on Linux. 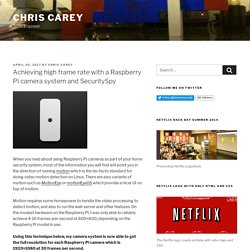 There are also variants of motion such as MotionEye or motionEyeOS which provide a nicer UI on top of motion. Motion requires some horsepower to handle the video processing to detect motion, and also to run the web server and other features. How to run a Raspberry Pi cluster with Docker Swarm - howchoo. Control your Raspberry Pi with your TV remote – Own your bits. This little script will allow you to control your Raspberry Pi using the buttons in your regular TV remote. 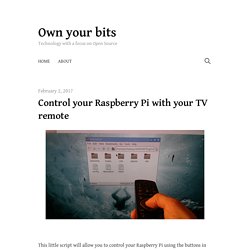 Usage You can press the following buttons on the remote. OK – launch kodiup – launch browserdown – change wallpaper (this is a custom script of mine)left – suspend your desktop computerback – halt Raspberry Pistop – enter “mouse mode”, to move the mouse with the arrows. OK to double clickplay – exit “mouse mode” These bindings are set as an example. Instalation First, follow the instructions to compile and install libcec. Make Your Own Wireless Printer With A Raspberry Pi. Wireless technology is perhaps the best improvement to home printing for years. 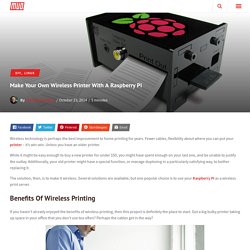 Fewer cables, flexibility about where you can put your printer – it’s win-win. Unless you have an older printer. While it might be easy enough to buy a new printer for under $50, you might have spent enough on your last one, and be unable to justify the outlay. Additionally, your old printer might have a special function, or manage duplexing in a particularly satisfying way, to bother replacing it. The solution, then, is to make it wireless. Benefits Of Wireless Printing If you haven’t already enjoyed the benefits of wireless printing, then this project is definitely the place to start. Comment transformer votre Raspberry Pi en serveur webcam ? Vous n'utilisez pas votre Raspberry Pi en ce moment et vous souhaiteriez lui trouver un usage fonctionnel ? 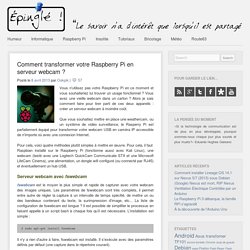 It includes also the possibility of connecting digital and analog sensors, using the same pinout of Arduino but with the power and capabilities of Raspberry. In order to make complete the compatibility we have created the arduPi library which allows to use Raspberry with the same code used in Arduino. To do so, we have implemented conversion functions so that you can control in the same way as in Arduino all the I/O interfaces: i2C, SPI, UART, analog, digital, in Raspberry Pi. Let's summarize what we can do using this shield along with the arduPi library: Plus de 70 idées de projets pour votre Raspberry Pi. Quadcopters to Alzheimer's solutions: readers' best Raspberry Pi projects.

Solutions for a relative’s Alzheimer’s disease, a time lapse camera and a gingerbread robot which dances when it detects a human face – these are just some of the projects you’ve been telling us about after we asked you to show off your inventiveness with Raspberry Pi and other electronics platforms such as Arduino. 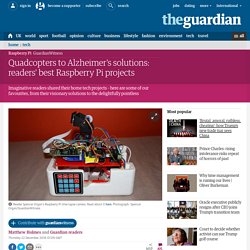 If you’re a regular reader this idea may be familiar to you – we also asked you to show us the Raspberry Pi projects you’d been working on towards the end of 2015. Many of you responded to that by telling us how you’d adapted and incorporated Arduino into your hardware projects – so we widened the scope. As well as the highlights below, you can see all of the projects you’ve shared so far – and tell us about yours – at this GuardianWitness page, or, discuss the ideas in the comments.

First up, one of many musical ideas you’ve been sharing. This piece of kit, explained in some detail below, could provide the soundtrack to the rest of this roundup … Now, time for a coffee break. Android Things on the Raspberry Pi 3: Running an Application : raspberry_pi. ArchWiPi - Raspberry Pi Wireless AP. Project homepage > haydenjames.io/download-arch-linux-raspberry-pi-wifi-access-point-setup Are you looking into turning your Raspberry Pi into a Wireless router? 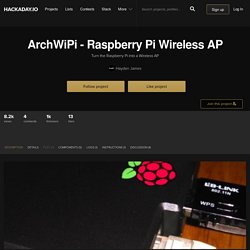 I've created a tiny Arch Linux ARM + create_ap based setup, packaged into a downloadable image that may interest you. Once booted the access point will create SSID ArchWiPI via network address translation (NAT). UPDATE: Today I received my LB-Link long Range WiFi USB Antenna which replaced my Edimax EW-7811Un If you prefer mini dongles the best I've tested so far is TP-LINK TL-WN725N Wireless N Nano USB Adapter. These were manufactured for two very different purposes, I still love both. Brainfoolong/gpio-webinterface: Control GPIOs with a webinterface. Simple, powerful. 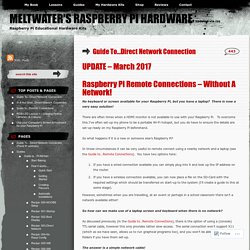 No keyboard or screen available for your Raspberry Pi, but you have a laptop? There is now a very easy solution! Home Assistant. A raspberry pi project you have completed or know of that actually makes life better, easier, or saves time? : raspberry_pi. GitHub - aikoncwd/rpi-benchmark: Script to run some benchmark test for Raspberry Pi. Is a pi a good choise to learn Linux? : raspberry_pi. Attendance system using Raspberry Pi and NFC Tag reader - All. 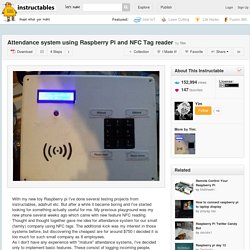 But after a while it became boring and I've started looking for something actually useful for me. My previous playground was my new phone several weeks ago which came with new feature NFC reading. Thought and thought together gave me idea for attendance system for our small (family) company using NFC tags. The additional kick was my interest in those systems before, but discovering the cheapest are for around $750 I decided it is too much for such small company as 6 employees. As I don't have any experience with "mature" attendance systems, I've decided only to implement basic features. For foot notice, this whole project including source codes is licensed under Beer-ware licence as follows: Jakub Dvorak wrote this file.

Raspberry Pi GPIO Pins and Python. The GPIO pins on a Raspberry Pi are a great way to interface physical devices like buttons and LEDs with the little Linux processor. If you’re a Python developer, there’s a sweet library called RPi.GPIO that handles interfacing with the pins. In just three lines of code, you can get an LED blinking on one of the GPIO pins.

How to get Python on your Raspberry Pi : Raspberry IO. Reset Your Password Since all Raspian images come with the same password, you'll need to change the root password so no one can access it without your approval: At the terminal, run sudo raspi-configChoose the change_pass menu option & enter a new password Configuring Your Keyboard By default, the Raspian image uses a English UK keyboard setup, which can lead to some confusion. For those in the US, following the following steps to fix the keyboard: At the terminal, run sudo raspi-configChoose the configure_keyboard menu optionOtherEnglish (US)English (US) - yes, again Additionally, if you like using the Caps Lock as Ctrl instead, run the following command:

I've been hacking together an NFC door entry system for my apartment. Here's a crude video demonstration. : raspberry_pi. Pi-Hole: A Black Hole For Internet Advertisements.

Libnfc/README.md at master · nfc-tools/libnfc. PiVPN: Simplest setup of OpenVPN. Python module for near field communication — nfcpy 0.11.0 documentation. Attendance system using Raspberry Pi and NFC Tag reader. Raspberry Pi 2 + MFRC522-python, to read RFID tag. Learn to program your Raspberry Pi. Note: Our learn to program your Raspberry Pi tutorial has been fully updated. This feature was first published in May 2013. In this tutorial, we're going back to the original idea behind the Raspberry Pi – namely, teaching people about technology. Over the course of this article, you'll get a whistle-stop tour of two programming languages that are included in Raspbian, the recommended distribution for the Pi. If you don't have a Pi, then you can still follow along if you're running Linux – you'll just need to install the programming languages through your distro's package manager.

Don't worry if you haven't programmed anything before. Starting from Scratch. Raspberry Pi Zero - Conserve power and reduce draw to 30mA. Yesterday my post comparing the Raspberry Pi Zero's power consumption to other Pis hit the Hacker News front page, and commenters there offered a few suggestions that could be used to reduce the power draw even further, including disabling HDMI, changing the overclock settings, and futzing with the lone ACT LED. I decided to spend some time testing these theoretical power-saving techniques on my Pi Zero, and here are some of the tips I've come up with (note that these techniques work with any Pi, not just the Zero): A few other seemingly obvious optimizations, like under-clocking the CPU, don't make a discernible impact on idle power consumption, and make a minimal difference in any real-world projects that I've measured. Do you have any other sneaky techniques to steal back a few mA?

For the Raspberry Pi Zero, I used all the above techniques, and here were the results: As you can see, it pays to conserve—if you don't need it, cut it away to save power! Linux Router with VPN on a Raspberry Pi - Alpine Linux. StarshipEngineer/OpenVPN-Setup. Créez votre propre serveur VPN avec OPEN VPN. Creating a LAMP server (web server - Linux Apache Mysql PHP) on the Raspberry Pi - Linux tutorial from PenguinTutor. This provides details of how to configure a Raspberry Pi as a webserver. This is similar to the guide to using Xubuntu as a LAMP webserver, but adds some of the things that need to be handled differently for the Raspberry Pi.

It is termed a LAMP server which is one of the most common configuration for webservers which standard for: Linux – operating system Apache – webserver (http) software Mysql – database server PHP or Perl – programming languages This setup is probably overkill for most uses of the Raspberry Pi, but it is the setup that most users will be familiar with and is a good way to learn about setting up a webserver. I’ll be looking at setting up a lightweight setup in future. All this configuration is done at the command line. How to set up a secure Raspberry Pi web server, mail server and Owncloud installation. Raspberry Pi Shairport build instructions - Useful Snippets. 2013-08-31 This post has been updated with new build instructions. Below you will find instructions on how to build the Preconfigured Airplay speaker (Shairport) image.