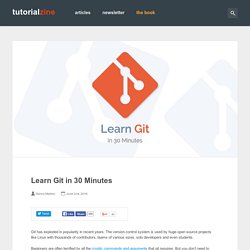 The version control system is used by huge open source projects like Linux with thousands of contributors, teams of various sizes, solo developers and even students. Beginners are often terrified by all the cryptic commands and arguments that git requires. But you don’t need to know all of that to get started. You can begin by mastering a handful of the most often used ones, and then slowly build from there. The basics Git is a collection of command line utilities that track and record changes in files (most often source code, but you can track anything you wish). Git is decentralized, which means that it doesn’t depend on a central server to keep old versions of your files. 1.

Installing Git on your machine is straightforward: Linux – Simply open up a new terminal and install git via your distribution’s package manager. If you are an absolute beginner, then a graphical git client is a must. Sublime Text (3) for PHP Developers - Matt Stauffer on Laravel, PHP, Frontend development. Posted on June 26, 2015 | By Matt Stauffer A lot of folks in the PHP community have been checking out PHPStorm lately, including myself and most of the developers I work with. 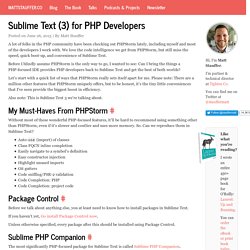 We love the code intelligence we get from PHPStorm, but still miss the speed, quick boot-up, and convenience of Sublime Text. Before I blindly assume PHPStorm is the only way to go, I wanted to see: Can I bring the things a PHP-focused IDE provides PHP developers back to Sublime Text and get the best of both worlds? Let's start with a quick list of ways that PHPStorm really sets itself apart for me. Please note: There are a million other features that PHPStorm uniquely offers, but to be honest, it's the tiny little conveniences that I've seen provide the biggest boost in efficiency.

Also note: This is Sublime Text 3 we're talking about. My Must-Haves From PHPStorm # Package Control # Before we talk about anything else, you at least need to know how to install packages in Sublime Text. Sublime PHP Companion # DocBlockr # Don’t provide this perk? — Work Together. Starting a new job is an exciting milestone. 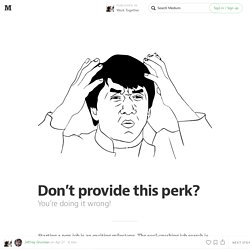 The soul-crushing job search is over and the nerve-racking negotiations on compensation are complete. Now you finally get your keycard and your company email. Logging in, you are greeted by two lonely emails that you promptly read and send to the trash. You revel in the glory of hitting inbox zero and marvel at the fact that this pristine oasis is your work email.

You hammer out a couple messages to your new team and you’re quickly on your way to getting things done. Fast-forward three months: Your inbox is overflowing. Hold on. We need to talk, because I think you have been swindled out of the most valuable employee benefit. I’m talking about Slack. “Psh, that’s ridiculous. I beg to differ. Communicate emotion, not just information. Humans are inherently social beings. Slack understands this, and focuses on establishing richer forms of communication between individuals instead of the industry standard: sterile transfer of information. 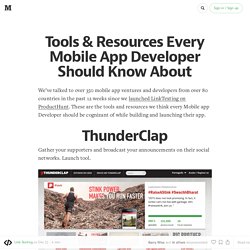 These are the tools and resources we think every Mobile app Developer should be cognizant of while building and launching their app. ThunderClap Gather your supporters and broadcast your announcements on their social networks. Launch tool. LinkTexting Landing page tool to get more downloads. Branch.io Branch makes the same powerful referral system available both on the web and in your apps.

We can’t praise Branch enough. LinkTally Find out how many times your website or blog post is getting shared across different social networks. iOS Dev Weekly Subscribe to a hand picked round up of the best iOS development links every week. R/iOSProgramming + r/androiddev Both of these subreddits provide easy access to tens of thousands of mobile app developers. BetaList MockUPhone Untorch. Code Your Cloud. Preview Your Work Preview and publish HTML, Markdown, and LaTex files and run Javascript and Coffeescript files Stay Organized Use the built-in snippet manager to keep handy code nearby Google Drive Your files are secure and accessible. 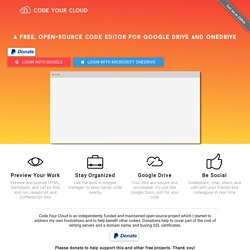 Be Social Collaborate, chat, share, and edit with your friends and colleagues in real time Code Your Cloud is an independently funded and maintained open-source project which I started to address my own frustrations and to help benefit other coders. Ideone.com - Online Compiler and IDE >> C/C++, Java, PHP, Python, Perl and 40+ other compilers and interpreters.